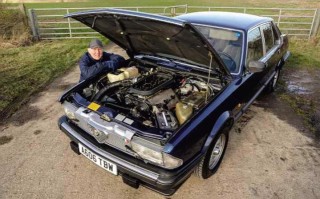 Tony Ludovico’s is the only Alfa-Romeo Alfa 6 2.0 6C in the UK. Words and photography Paul Hardiman.

Six carburetors? Now, why would you do that, instead of using a trio of twin-chokes? ‘It’s the Italians,’ says Tony Ludovico, himself second-generation English but who has run cars from his father’s homeland all his life, ‘they like to make things confusing.’

When the Alfa 6 executive sedan, the first car to use the legendary Busso V6, was facelifted in 1983 following its 1979 launch, it received L-Jetronic fuel injection... except for the new tax-break 135bhp two-litre version, of which Tony’s is the only one in the UK. that carried on with the six single Dell’Ortos, packed like sardines in the vee. Why? Why not? It does imbue the creamy V6 with a deliciously crisp top note, though Tony admits that with just 130lb ft delivered at a rather high 4500rpm it’s a revver not a stonker. ‘It’s not that fast,’ he says.

His car is almost impossibly immaculate for an Alfa sedan of this age, most of which have rotted away. It’s had a few bits of paint, for sure, but there’s Waxoyl everywhere - rare for Italy - and it was obviously a cherished car specced from new with air-con, metallic paint and the optional dog-leg ZF five-speed on top of the standard power steering, all-round disc brakes, limited-slip differential, power windows and mirrors, and central locking.

It still wears its original Tamburini dealer sticker in the back window, and Tony is in effect only the second owner after the car came out of 17 years of storage, having been supplied new to Camucia in Tuscany. Even the Michelin XVS on the spare may be the original, bearing a 333 date stamp. Sharing chassis mechanicals with the Alfetta and GTV, only 1771 of the small-capacity 6Cs were built compared with more than 7300 2.5s.

‘I’d gone to look at a Fiat 130 sedan,’ he says. ‘But then I spotted this in the corner.’ It had only just arrived at Essex dealer Classics & Cabriolets, and needed to be recommissioned with new belts and put back on the road. ‘I drove it 100 miles home. It had been in storage for 17 years sol panicked a bit, but it was the best experience. When I got it home, my brother drove it past me a couple of times. “Keep it in second and give it some welly,” I said.’

Ludovico’s first car, at the age of 20, was a Fiat 131 Sport in orange which he kept for seven years until it was run into by a council truck. His ninth is an Alfa-Romeo 164 Cloverleaf show car. the 6 will probably go the same route and wears repro engine-bay stickers sourced from the Alfa Club, but, he says: ‘A lot of parts are very hard to find.’ those six carburettors make it easy to flood the engine and drown the plugs, so the wise Alfa 6 owner always travels with a spare set and a suitable socket spanner. But this serial Italian owner remains impressed by the car’s luxurious appointments, even if it took him a while to find the filler cap (behind a discreet flap on the right C-pillar) and the bootlid lock (hiding under an innocuous swing-flap next to the Alfa badge). ‘Just look at the luxury for its time; even the ashtrays in the door handles. It’s a real Mafia car.’