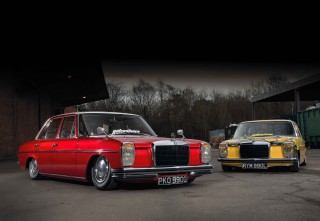 Mega Mercedes 3-way Race, custom and show cars - we’ve got the lot! In a past life, Paul Aveil was a linchpin of the 1980s Chelsea Cruise. And when his son James decided to bag an old Merc, it rekindled all sorts of old memories… Words: Dan Bevis. Photography: Matt Richardson.

The father-and-son automotive bond is an age-old story, something we come across time and time again. It all starts with the guiding hand of a petrolhead father, be he a mechanic, a racer, a custom builder, or simply an enthusiast with a penchant for hot motors, and there are always guaranteed to be interesting cars about the place. When the Hot Wheels child becomes the Gran Turismo teen, they graduate to playing with real cars, and there’s no chance of anything staying stock for long. But how often do we find this shared pan-generational interest manifesting itself as two matching cars? That’s far rarer. However, as Paul and James Aveil neatly prove here with their pair of W114-generation Mercs, if you do it right then it’s just about the most awesome thing ever. 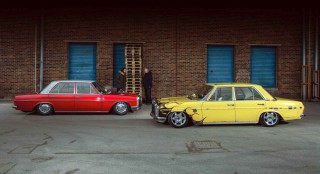 The father of this duo, Paul, is an engaging 61-year-old petrolhead; once you sit him down and quiz him about his automotive history, you’ll need to make sure you’ve got a couple of pints and some comfy chairs. “My first car was a Corsair 1700 V4 – which I wrote off!” he begins. “Second was a Corsair 1500GT – which I also wrote off. I soon learned that slowing down a bit would be more economical on the wallet!

“I started a small car repair business in Gravesend in the early ’80s,” he continues, “and got into the custom car scene - you know, the days of the Chelsea Cruise when you could pull up in Battersea Park and the bridge would be heaving with spectators either side. I always wanted a Trans Am or Corvette, they were the ones to have, and I ended up with a 1970 Camaro that had been painted pearlescent white. After that, and this is one I should never had sold, in hindsight – I had a 3.1 RS Capri. It was a bit of an animal; 6lb shaved off the flywheel, stage 2 bump stick, larger downdraught carb… I loved it but needed money so I sold it. For £275! Another one I should never had sold was my ‘1969 bullnose Firebird, I got £250 for that.”

Time has telescoped to such a degree that we almost forgot we were here to talk about Mercs in the first place. So, after another trip to the bar, we steer Paul back on track. “Getting married, having a baby, it got me out of the fun cars and into the commuters, the company cars,” he sighs. “I was out of the scene for a long, long time. But when my son James was all grown up, we started building up his W114 and it brought all those memories flooding back.” 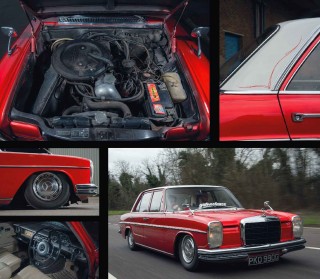 Let’s turn to James, then, and get his perspective on where this whole story originated for him. You’ll be unsurprised to note that the ingrained car enthusiasm in the family DNA started him off down the right path. “My first car was a Mk2 Caddy van, which eventually ended up lowered on a set of Revolutions, and had many different looks over the years,” he says. “It was a couple of years after first buying that when I bought the Mercedes - still keeping the van as my daily. I also owned a high-mileage mapped B5 S4 for a while, but sold that on before the expensive bills started coming in! I originally wanted a classic Merc after stumbling across the Governors Club Instagram page, run by John Ludwick Jr. who, at the time, owned an awesome bagged W111 Fintail. Suffice to say that got me hooked instantly.”

After an extensive search, the car of James’s dreams was unearthed on the Car and Classic classifieds – a 1969 250, with a 2.5-litre straight-six and panache in spades. The father-and-son team popped over to Catford to view it, and found themselves poring over a straight and tidy example with all of its chrome in near-perfect condition. The interior was immaculate, offering up that inimitable old car smell, and a glance underneath revealed a little bit of rot but nothing too troubling. The motor wasn’t running, but Paul wasn’t fazed by that so James cheerfully slapped down a deposit.

“We went to collect it a couple of days later, which was a bit of fun as the brakes had seized so the winch on the recovery truck we’d borrowed did struggle a bit,” laughs James. “But it was a great buy – it hadn’t been on the road since 1994, my birth year, and only had two former keepers, both in the same family. Apparently it was a chauffeur car, which we reckon is why it only has a headrest on the passenger side, not the driver’s. Maybe because it would have been rude to have that distraction in the way when trying to talk to the driver, that’s the only reason we can think of!” 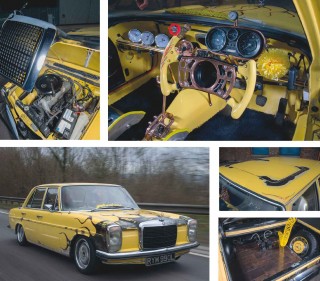 Recommissioning the car turned out to be relatively easy, thanks to how solid and honest it was; the inner rear arches needed refabricating, new front floorpans were welded in, the brakes were rebuilt with new lines, and a pattern wing replaced a too-far- gone original. The rear subframe and diff came out to be rebuilt and painted, the underside was stonechipped and painted, the carbs were tweaked, and the job was a good ’un.

Of course, this isn’t Practical Classics. You don’t want to hear about bone-stock restored old motors. It was time for Paul’s old-school Chelsea Cruise wickedness to come into play…

One of James’s key decisions was to run the Merc on air-ride. Naturally you can’t just pick up a kit off the shelf for a ’1969 Merc, so Paul cracked open his trusty old toolbox and got busy. “The air suspension mounts were all made at home by my dad, with the rear shocks relocated further on the trailing arms to allow space for the bags,” James explains. “We repainted the shell in the original brown at first, but then decided to paint it again in Renault Flame Red as it’s a bit more vibrant and eye-catching – a bit more of a Chelsea Cruise vibe. Most of the work was done in the winter months, and we did it all ourselves on the driveway with no cover! I’m pretty sure it was the first bagged W114 in the country at the time, and it certainly caused a stir on the scene.”

It wasn’t just the wider car community that was inspired by the finished build either. Paul found himself enraptured by the red bruiser’s charms, so much so that he had to get a piece of the action for himself. Before he knew it, he was browsing the Car and Classic classifieds as history repeated itself, finding a yellow 1973 W114 280 in Edenbridge; the body was tatty, but it was a runner and he was actually able to take it for a test drive. “The bloke selling it had already told me that the bulkhead was extensively rusted around the transmission tunnel,” Paul recalls. “In fact, it was so bad I could take the oil filter off the engine without getting out of the car! Anyway, I drove it around his unit, and £800 later I drove it home. The plan was simply to sort the rust and bag it, simple as.” Yeah, it sounds simple on paper, but the thing about old-skool rodders is that they tend to get carried away. Paul removed the dash in order to get to the rusty bulkhead, and this necessitated removing the steering column too; to get to the nut on the steering wheel he removed the rubber cover on the horn push, and revealed copper underneath. This may seem like an insignificant detail, but it catapulted Paul’s imagination right back to the eighties: “The sight of that copper sent my brain into overdrive,” he grins. “The dash was cracked, the centre console was worn out, the wooden veneer in the dash was bad, so what the hell! I decided this was going to be different.”

And how! After three months of solid graft on the driveway, the patinated yellow Merc now has a full custom interior, sporting a hand-crafted copper pipe dash, fully smoothed floors and tunnel, a bonkers cut-down steering wheel with the air-ride controls recessed into it and, as a last-minute addition, one that finishes off the ethos a treat, a pair of RAF bomber-style metal seats.

After all of this work together out on the driveway, what these fellas have ended up with is a pair of retro Mercs, similarly specced on paper and yet startlingly different in character: James’s features a flawless, show-stopping exterior finish paired with luxurious vintage innards for low-and-slow cruising, while Paul’s is an in-your- face rebel with unapologetically patchy paint and one of the coolest interiors we’ve seen for a long time. Together they air out with more finesse than most customs on the scene, and it’s the passion within each build that makes the pairing so very special. We’ll see you on Chelsea Bridge, okay lads?

Interior: Bone-stock aside from air-ride gauges in glovebox and shagpile rear carpet

Collector - passion for all things Mercedes-Benz