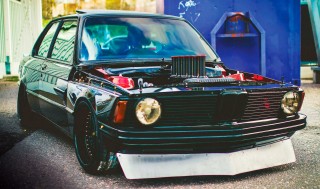 When the nights draw in and the snow starts to fall, what do you do? Stick some cocoa on and snuggle up under a blanket? Not Christo­ er Åström – he’s spent those long winter nights crafting a unique and spectacular BMW E21. Words Dan Bevis. Photos: Mattias Olsson.

Adapting to environmental conditions is a behaviour instinctive to all creatures, from the hibernating tortoise in its winter box to the absurdly-shod blue-footed boobies of the Galápagos Islands. To humans living in the United Kingdom, this manner of adaptation has evolved into a sort of grimacing resolution; a general aura of being prepared for the worst, because it may be sunny now but it’ll probably rain soon. Brits don’t act like, say, Hawaiians, reflexively reaching for their beach shorts of a morning without so much as a troubled glance through the window first. The umbrella is the weapon of choice, closely followed by the barbed and defensive sarcastic quip. 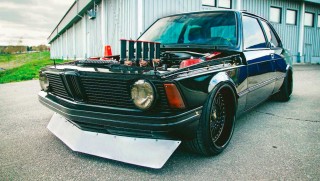 Over in Scandinavia, there’s a markedly different scheme of environmental adaptation going on. It’s broadly similar to hibernation, except that the prolonged slumber is replaced by a lengthy period of furious activity. It’s the long winters, you see – when you’re expecting heavy snowfall for a great many months on the trot, it’s only reasonable to get a bunch of tinned goods in, batten down the hatches, and busy yourself with a project. Interestingly, a lot of these anti-hibernation activities seem to centre around taking unsuspecting old cars and shoving massive turbocharged Volvo engines into them, meaning that by the time springtime deigns to peep its furtive eyes above the horizon, there’s a fresh new batch of drift cars ready to cause mayhem and do their best to diminish Northern Europe’s mythical tyre mountain. However, Christoffer Åström has a different approach. Better known as Coffa, this is a man with a more global outlook on monkeying about with motorcars.

Sure, he has a deep appreciation for bigpower drift builds, but that’s not what’s informed the direction of the unique and gloriously odd E21 BMW you see here. This is more a fusion of German tuning, Belgian aesthetics and British stance, with a liberal sprinkling of American west-coast custom flair. An intercontinental culture clash from the snowy wilds of deepest Scandinavia.

‘THE E21’S EXHAUST MANIFOLD IS STUNNING’

Coffa is a man of varied tastes, as his automotive CV keenly demonstrates. A favourite of ours from his personal back-catalogue is the imposingly blue Opel Ascona with its redtop Volvo B23 motor and massive shiny turbo. And there have been plenty of others. ‘I’ve built a number of different cars over the years,’ he explains. ‘There was a ’1974 Opel Kadett C with a 2.0 16v engine from a Calibra, 5-speed gearbox, Manta GT/E LSD rear axle and Nissan Skyline brakes. Then there was the complete renovation of a ’1967 Pontiac GTO, and also a really hard-tuned Skyline with over 550bhp on the rollers.

And quite a few others.’ This, then, is the kind of guy you want to have a pint with. You can see from the vibrant updates on his Instagram feed, @custom_by_coffa, that he’s doing much to dispel our caricaturised perception that the default Swedish mode is ‘stick a Volvo engine in it’.

‘I bought this E21 from a friend, who’d had it for about 10 years without doing anything with it,’ he explains. ‘The engine had been pulled and it had just been left sitting. Before that the car had been used as an ice racer, competing on frozen lakes, so when I picked it up it stood as it had been used – very worn and damaged, both in drivetrain and body. But I really wanted to build an E21, simply because they’re a bit odd; most people go for the E30 as a project build, these early cars aren’t so common or so appreciated. And I had an idea to base the build around carburettors with really aggressive intakes…’

Well, it’s safe to say he’s achieved that, but let’s begin at the beginning. Having no garage of his own to speak of, Coffa had to sweet-talk his bosses into allowing him to store the car at work, tinkering with it over evenings and weekends. But we can only assume that this is a man who requires zero sleep, as the amount of effort that was crammed into those late nights has turned a knackered and battle-scarred E21 into a faultless and sumptuous custom creation. ‘The body was widened one weekend, and painted a few weekends afterwards,’ he says. ‘From time to time the car had to be moved to a friend’s garage to keep the work going during weekdays!’

‘THE ENGINE’S BEEN BORED TO 2.7-LITRES AND BREATHS THROUGH THREE WEBER IDH CARBS’

The body alteration is beautifully done, as it all appears factory to the untrained eye, but in fact what Coffa’s done is to fabricate wider wings from steel, adding 3cm of girth at the front end and 6cm out back, and it’s all been carefully profiled so as not to jar with the original window angles. Both of the doors and various other elements of the bodywork had to be replaced, thanks to the rough-and-tumble of ice racing as well as the unavoidable vagaries of age, and there was all sorts of adjustment and realignment necessary to get everything as straight and true as you see here. The car positively drips with custom touches too; the bumpers, for example, have been converted from the standard three-piece parts to simpler one-piece items, their brackets modified to allow them to sit closer to the body.

The rear bumper has also been cut out to allow the number plate to move upwards, so that there’s space for the amusingly angry-looking centre-exit exhaust system. And you can make your own jokes about the necessity for snowploughs in that part of the world, but the aggression of Coffa’s bullish aluminium front spoiler (and accompanying boot spoiler) is undeniable. Indeed, aggression is the name of the game here; regulations be damned, all the windows are tinted including the front screen. Because you can’t maraud in a post-apocalyptic Mad Max death race if you’ve got the sun in your eyes.

Of course, when you plan a build around a set of carbs with big trumpets, you’re setting yourself up for some entertaining work under the bonnet, and this fella’s certainly been enjoying himself here. The engine bay itself is gloriously smooth, shorn of all redundant embellishments and with all wires artfully tucked out of sight, before being shot in a vibrant and glittery shade of red like a fairground dodgem. All the better to showcase that engine with, and what an engine it is: eschewing the genetic imperative to bung a Volvo motor in there, Coffa’s instead kept it Bavarian with a 2.3-litre M20 six-pot.

But this is no ordinary M20 – it’s been bored and stroked to a much healthier 2.7-litres, the build specifically focusing on running a higher compression ratio thanks to high-comp pistons and a cylinder head modded to reduce the combustion area. A spiky Schrick cam works hand-in-hand with uprated valve springs and a head reworked for optimal flow, the focus being on usability and wide-eyed amusement.

And then we come to those carburettors… the E21’s running triple Weber IDH 44mm carbs, with the party piece being their hilariously tall trumpets, poking way up and sitting broadly in line with the top of the dash. It’s a fabulously naughty detail, to such an extent that it’s easy enough at first to miss the fact that this M20’s also wearing one of the most beautiful exhaust manifolds ever crafted, its sextet of writhing intestinal pipes disappearing into the depths of that glimmering red bay like the aftermath of some grotesque horror movie slaughter. It’s astounding.

Naturally you can’t go to such lengths with the body and the motor without getting pretty serious with the interior too, and Coffa’s efforts here certainly don’t disappoint. If you’re struggling to place the provenance of the those front seats, they actually originally called a VW Passat CC home; they’ve been remodelled to fit here, with a customised rear bench to match. 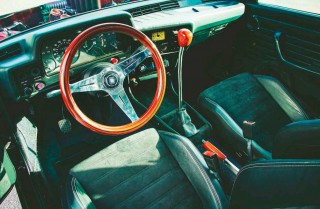 The Nardi steering wheel is a classic addition, and it’s joined by a custom-crafted gearknob and handbrake handle in a matching wood. You’ve probably also spotted that the gear lever is impressively tall, as if it’ s craning its neck to get a look at the carb trumpets, like long-lost lovers over a prison wall. Post-modern, weird for the sake of weird? Hell yeah, and there’s absolutely nothing wrong with that.

‘The car is built according to my own ideas,’ says Coffa, and that’s precisely as complex a rationale as you need. ‘I have mixed styles from various areas and scenes that I admire, but the main goal of the car was attitude – this build had to have a lot of attitude! I had a lot of help from friends to make the car look like it is for the Elmia Custom Motor Show 2019, and it received a very positive response from different people, young and old. It stands out a bit, and I think people appreciate that.’

He’s not wrong. This E21 is a jarring counterpoint to what a lot of people would consider to be mainstream Scandinavian modifying, and it’s all the better for it. Fight or flight, that’s the adrenaline rush here, and Coffa’s physiological response to those harsh winters is to kick out, get angry, and create something fresh. We’ve never seen an E21 quite like this, taking inspiration from so many global influences, and it’s a fabulous representation of the very concept of human creativity. Quite simply, it’s evolution in action. 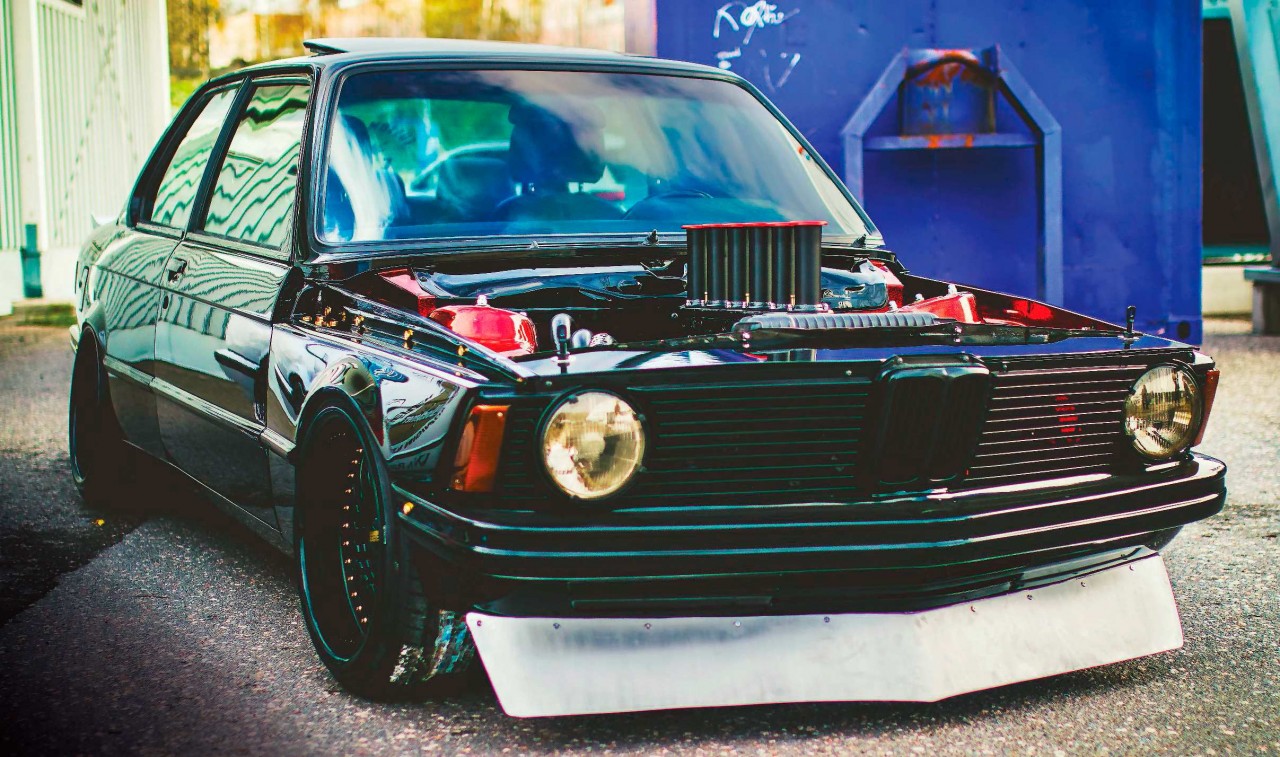 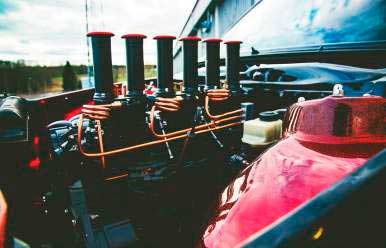 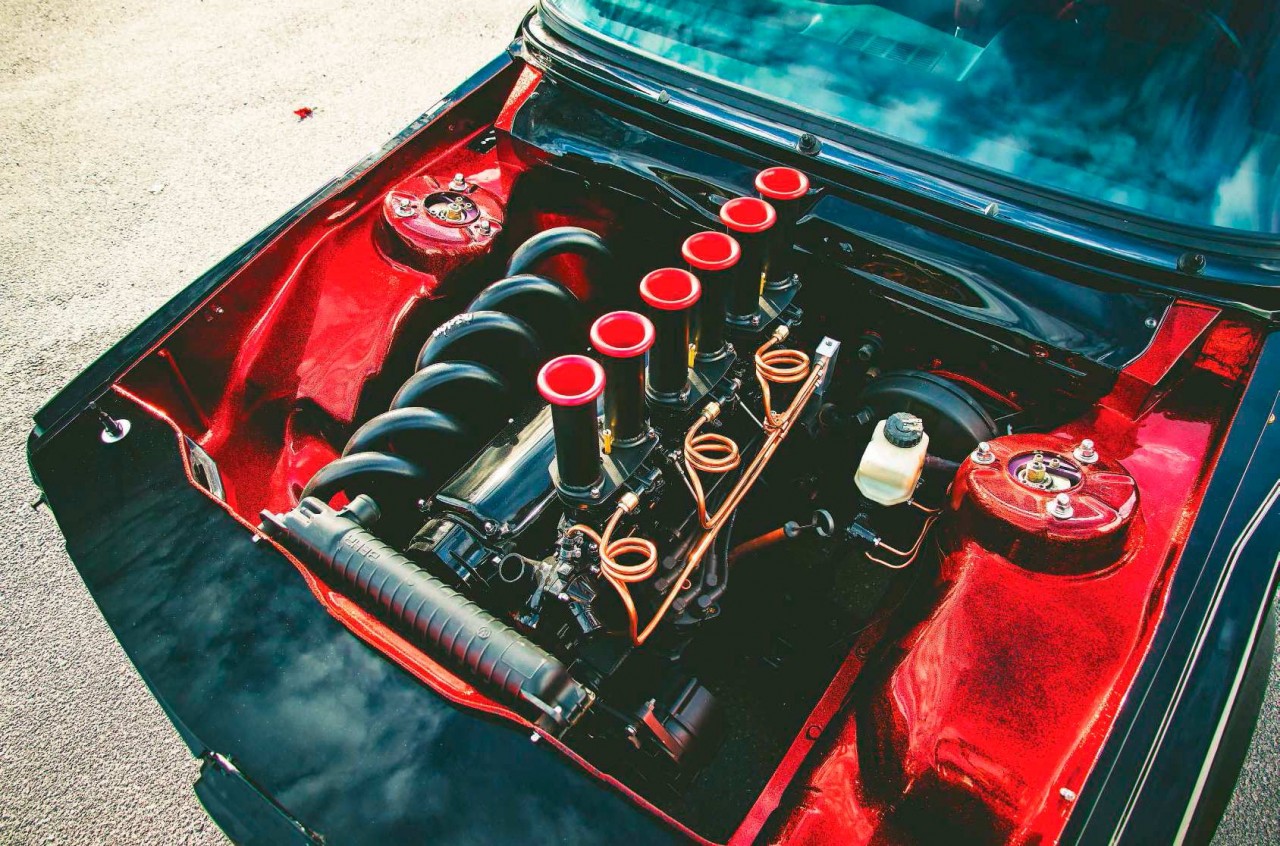 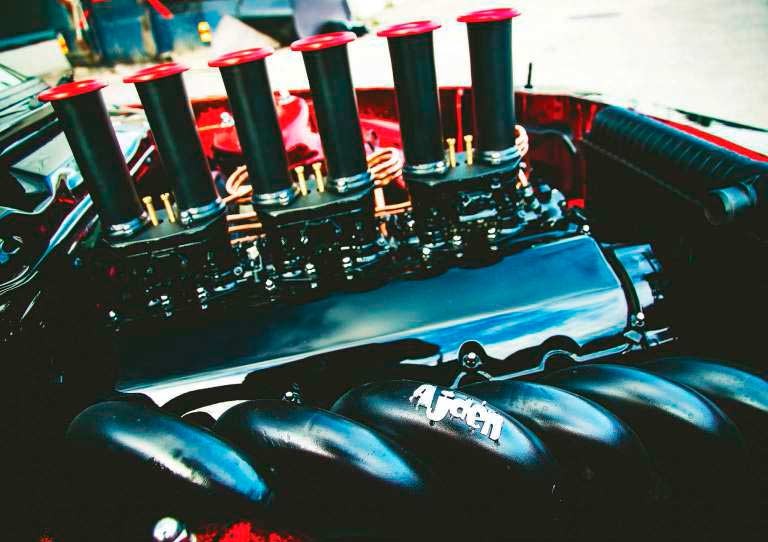 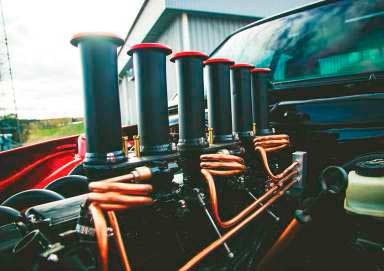 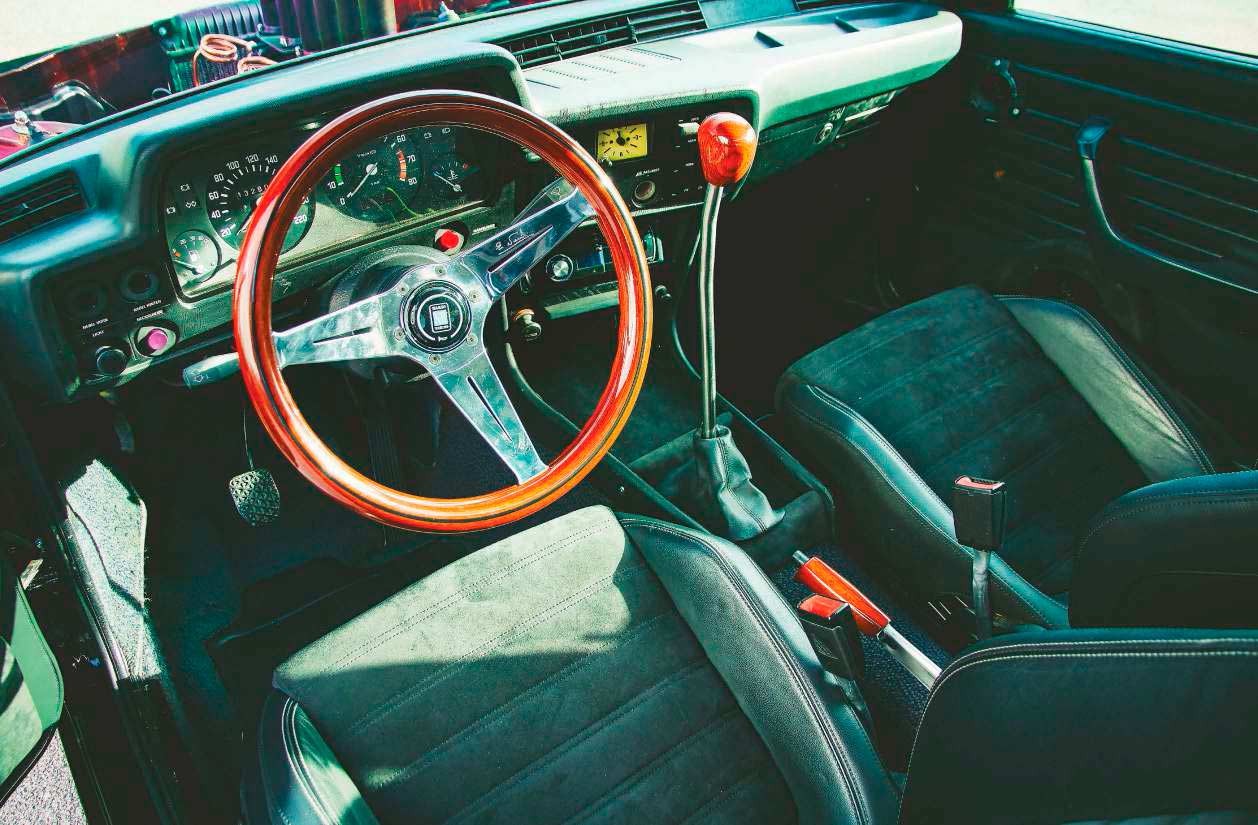 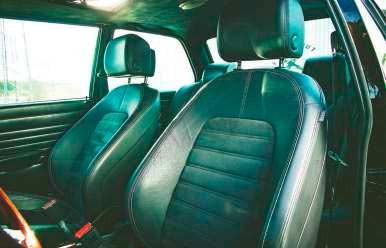 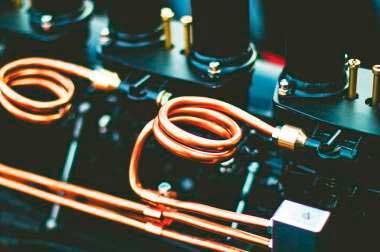 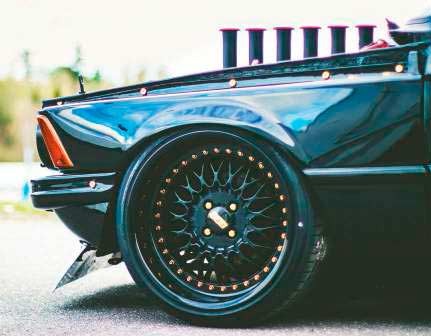 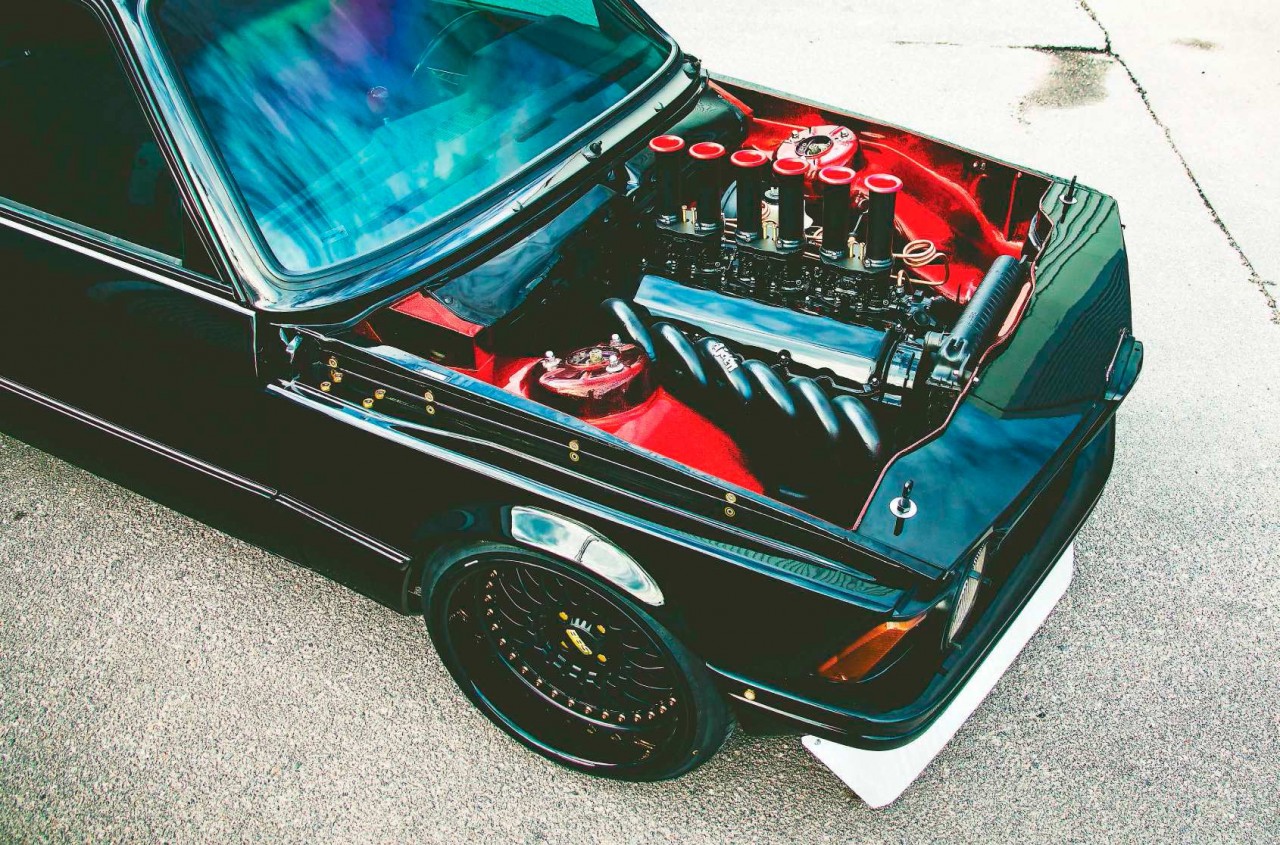 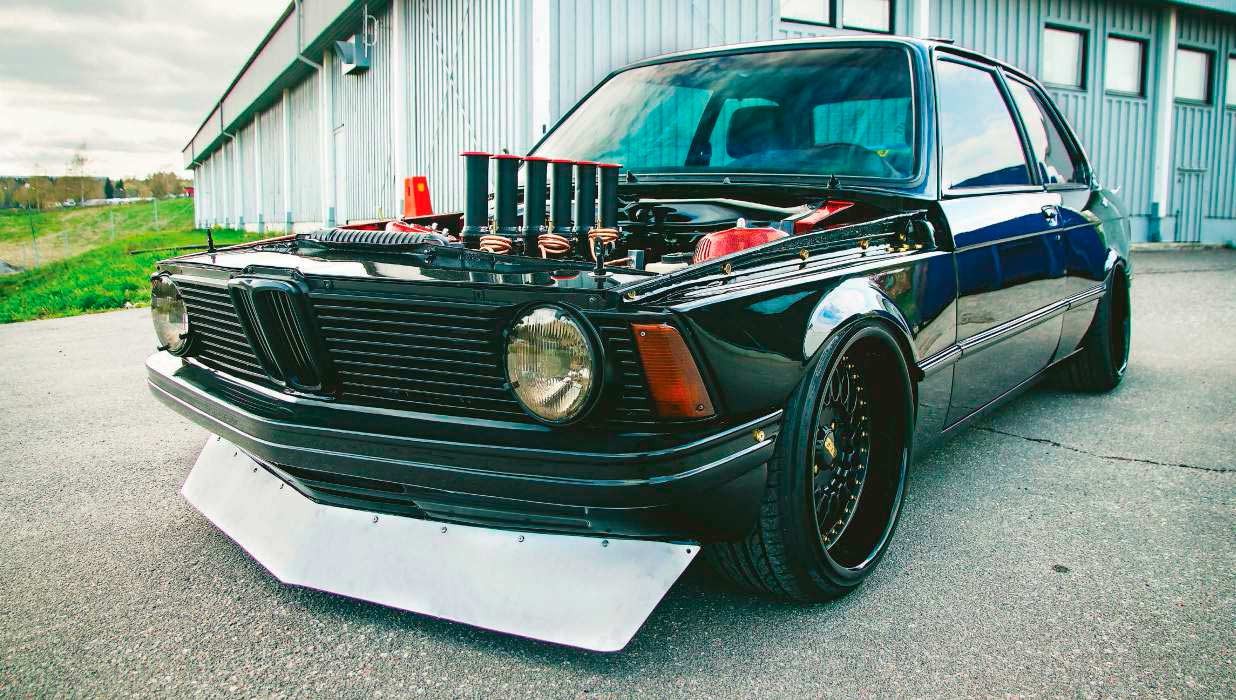 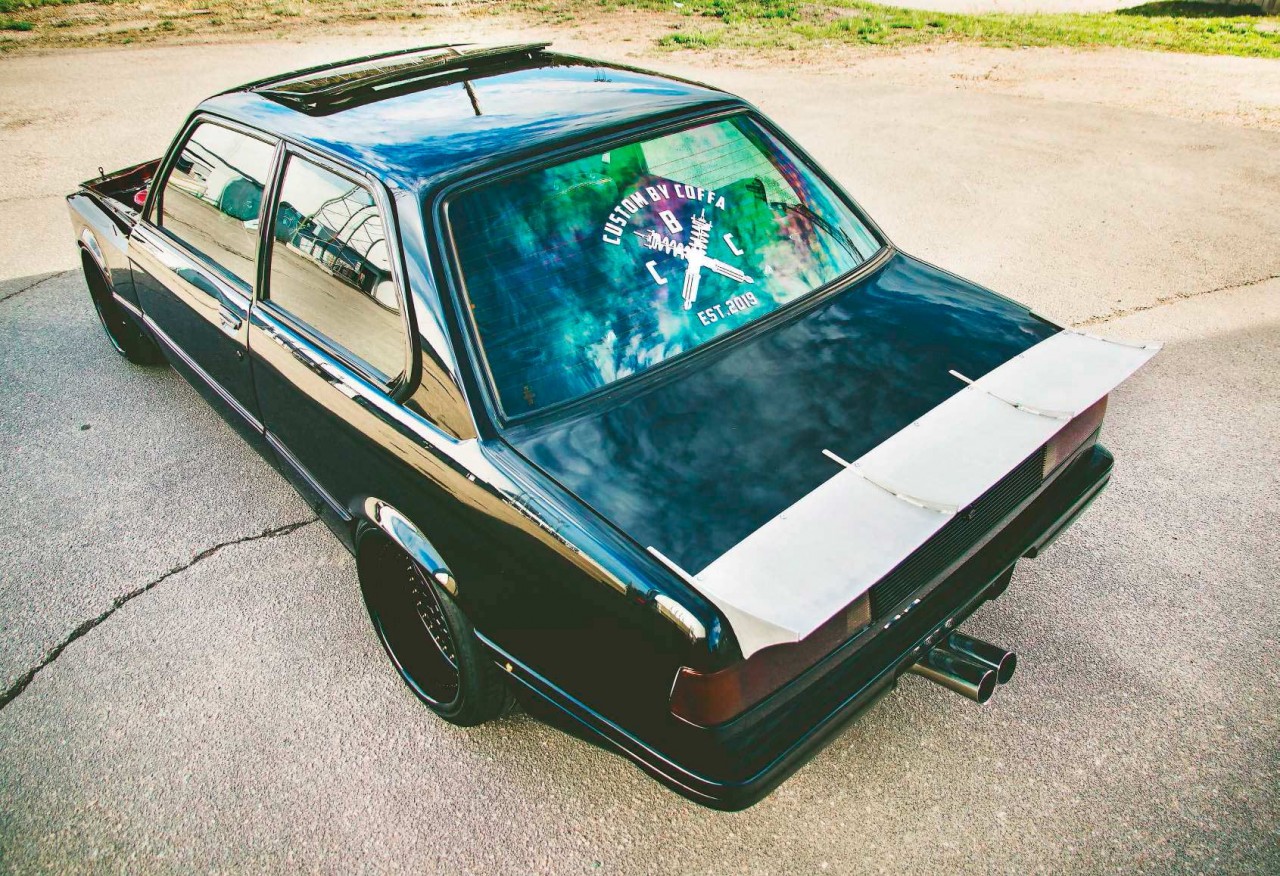 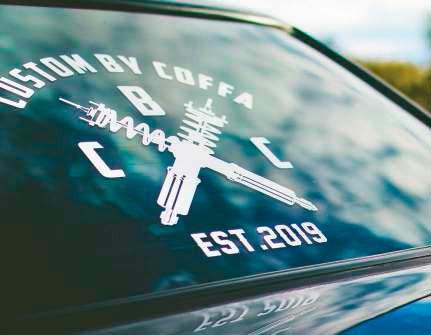 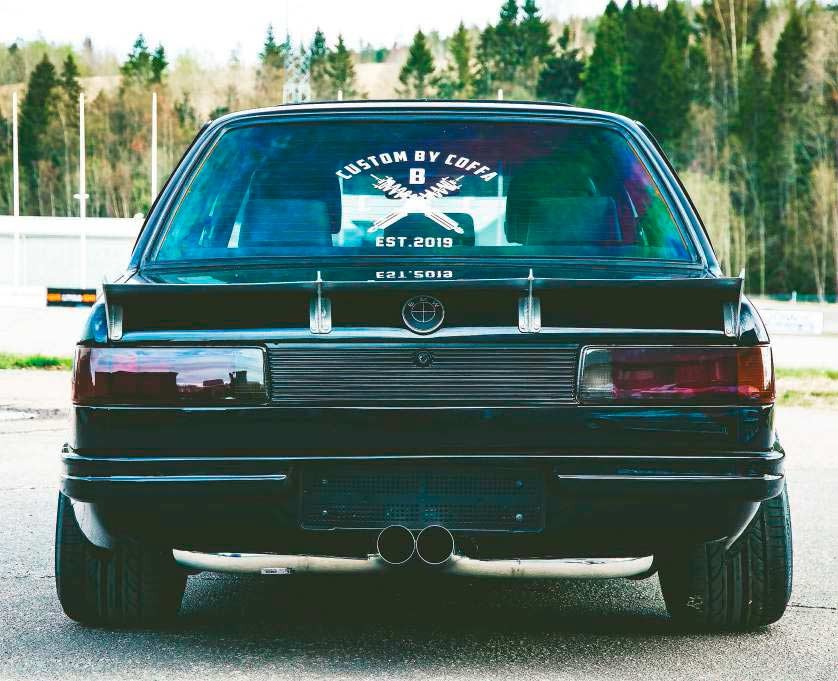 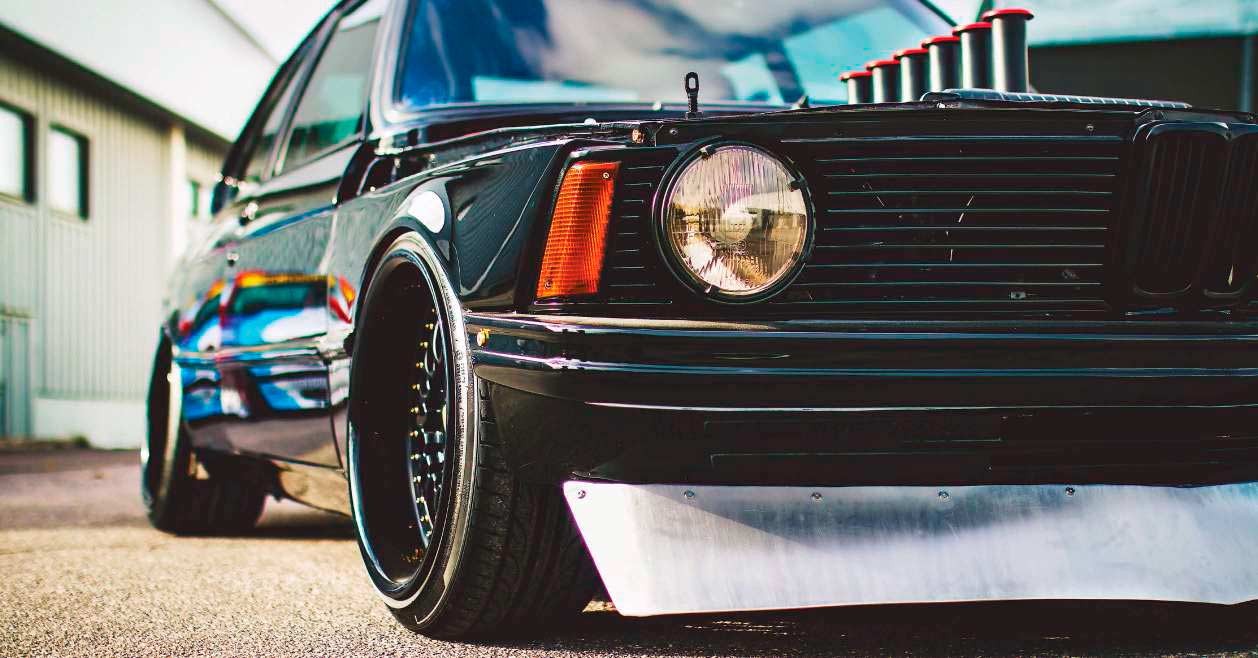 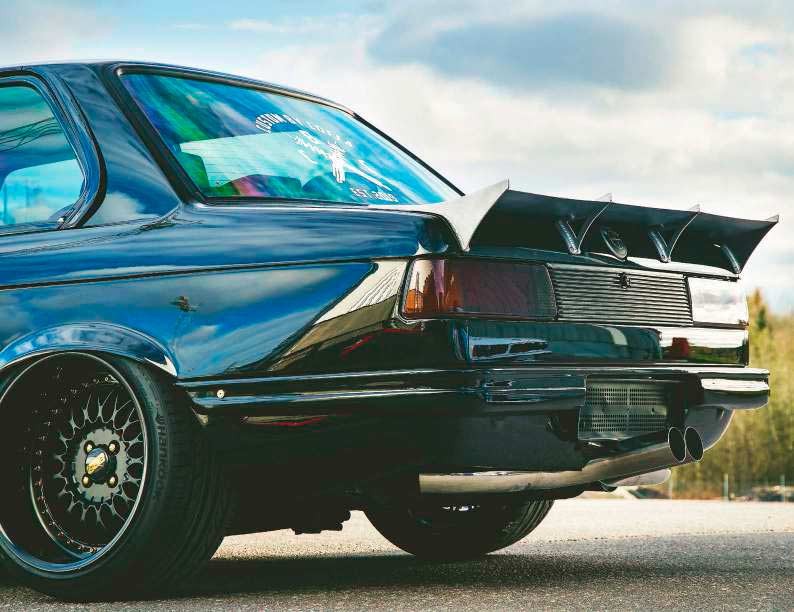 Steam punk vibe added by copper fuel lines. ‘I wanted it to have attitude,’ says Cofa. Uh huh. BMW M20 straight six bored from 2.3 to 2.7-litres. This engine bay is a work of art. Front spoiler is, of course, hand-made. Interior is pure custom car. Why bother with a bonnet when your engine bay looks like this? Centre exit exhausts line up with engine bay trumpets for stunning visual effect.