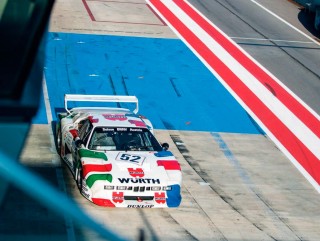 Sauber’s Group 5 M1. Sole-surviving fully-restored twin-turbo racer profiled. One of a Kind When Sauber wanted to race the M1 in Group 5 it built two from the ground up. There’s just one left. Back in the 1980s Sauber built two Group 5 twin-turbo M1s from scratch and this one is the only surviving example. Words: Robb Pritchard. Photography: Wolfgang Maringer.

In the last issue of BMW Car we ran a feature on the glorious Group 5 Schnitzer 3.5 CSL for which our author, Robb Pritchard, spent a long time poring through archives of 1970s sportscar racing… But as beautiful as the Batmobile was he found out that it wasn’t actually the coolest ever Group 5 BMW. That accolade has to go to the Sauber-built M1. Sadly though the whole M1 project wasn’t such a happy story… 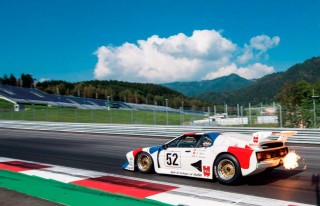 With the chassis and suspension designed by Dallara of F1 fame, the body by Giorgetto Giugiaro, who went on to be awarded the accolade of Car Desiger of the Century, and a planned build by Lamborghini, the M1 should have been a soaraway success. But despite the reverence classic BMW fans hold the M1 in today, in its time it was both a commercial and competition failure. Lamborghini was struggling with bankruptcy so the build deadline for the 400 units needed for FIA homologation was missed and the Procar series, as spectacular as it was to have the day’s current F1 drivers hammer it out before a Grand Prix, was put together only because the cars weren’t eligible to race anywhere else.

For 1981, two full years behind schedule, several teams did take the finally homologated Group 4 cars and converted them to race in the Group 5 class but Sauber, expanding on its sportscar racing collaboration with BMW, built the only two Group 5 cars from scratch. Hear the name Sauber today and perennial F1 midfield contenders, or the silver Group C Mercedes C9s of the 1989 Le Mans might spring to mind, but its history goes all the way back to the late ‘60s and includes both gorgeous, and perhaps not so gorgeous, race car creations. The M1 is most definitely in the former category.

The Swiss team had run its own cars at Le Mans and the Interseries, which was the European equivalent of the American Can/Am championship, but these high power and downforce cars bore no resemblance to anything on the road. With the M1 though Sauber saw an opportunity to run with a recognisable shell which would have the added benefit of production cars sales attached to the project. It was a good plan and two cars were made with lightweight, fully adjustable tubeframe chassis and aerodynamics that could be set up for each circuit. One was run by GS Racing with the high-profile driver pairing of Hans Stuck and Nelson Piquet in the psychedelic red and white BASF livery while the white with blue and green splotches Würth-sponsored car was run by Sauber itself, with Marc Surer and Dieter Quester on driving duties. 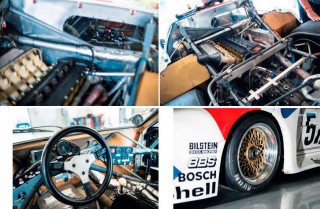 The cars were a significant 150kg lighter than any of the other M1s converted from the Procars and could lap the Nürburgring Nordschleife a full twenty seconds faster. For all intents and purposes they were in a class of their own. They were also the last cars that Peter Sauber actually physically worked in before taking up a more supervisory role.

The debut race, at the Silverstone 1000km, didn’t go to plan though and the GS Racing BASF car, the only one entered, retired half way through with gear selection issues, but at the following event all development pains were forgotten when Stuck and Piquet took a magnificent win at the gruelling Nürburgring 1000km ahead of some serious competition, not least the works run Porsche 910/80. The project looked to have come good after all… Unfortunately the win would prove to be a false dawn. 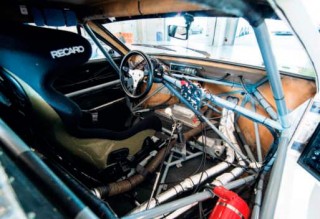 At Le Mans the BMWs were outclassed by the well-developed Porsches and the Lancia Beta Montecarlos and recorded a double retirement; an accident for the GS car and engine failure for its Sauber sister. There were some positives to take away from the event though. Marc Surer in the Würth car was clocked at 330 km/h (205 mph) down the Mulsanne Straight which was the fastest Group 5 car and and 10th fastest overall. Then things got a lot worse as at the next race at Kyalami in South Africa Stuck had a huge, fiery accident. He was lucky to be able to walk away but the car was left a smouldering write off. Only the two chassis were ever made so the Würth car is now the only example of its kind to exist.

The rest of the year failed to bring any significant results and the project was brought to an anti-climatic end when the rules were changed in favour of Group C which the manufacturers were much keener on… So at the end of the season the car was sold onto Enzo Calderari from Switzerland and was entered in the first ever Group C race, the 1982 Monza 1000km, in the white with blue lettered ‘Kreepy Krauly’ livery. After two hours Calderari was running in an excellent fourth overall until engine problems ended the race. Later that year Calderari was joined by Umberto Grano and Helmut Kelleners for the Nürburgring 1000km where they achieved a respectable third place overall and first in Group 5. In the Kyalami 9 hours in November Calderari, Grano and Belgian driver Eddy Joosen took the car to seventh place overall, and again the first in Group 5, which was the last of its significant results. 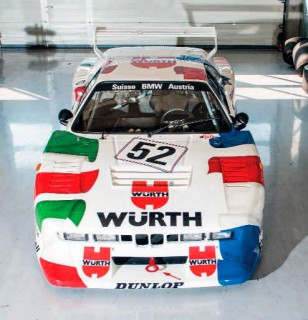 At the end of the season the car was sold on to Swiss driver Jürg Bächi who entered it events in Scandinavia until the mid ‘80s, before Sauber bought it back and kept it as part of his private collection. From then on the car was only seen very rarely when Peter decided it would be nice to blow the dust off it but in 2013, after 25 years of owning it, he decided the time had come to let it go. However when money is not your motivation for a sale you are afforded the luxury of being able to choose who becomes the next owner, so instead of advertising it he looked for whom he wanted it to go to.

Adrian Gattiker had been racing Porsches for many years but like many competitive drivers who get to a certain age keeping up with the unceasing technology and its inherent cost starts to lose its appeal and so he started to look for a classic car to enjoy. Something a bit special perhaps. A mutual friend of Sauber and Adrian who found out about the M1 sale put them in touch and while it would be normal for a potential buyer to discuss the price Adrian was interviewed about his intentions for the car and his ability and willingness to give it a thorough restoration… Fortunately he was found to be acceptable and a large but nondisclosed amount of money was handed over on the understanding that the car would be very well looked after.

Adrian duly took the car to Peter Wiederkehr, a former Chief Mechanic at the Sauber Race Team who stripped it down to its constituent tubes and nut and bolts. The car wasn’t in a bad condition as it had been well looked after in the collection and hadn’t been driven in anger since 1987 so it wasn’t a restoration in the sense of replacing rusty metal and worn out parts. But every single part was examined to see if it could be refitted or needed to be replaced. It was a laborious process and cost more than some other exotic classic cars would be to buy, but if ever there was a one of a kind car worthy of a no costs consideration re-build then this is it.

None of the internals in the Hewland gearbox were specific to just this car so new bearings and seals were old but stock items. Similarly for the M88/1 engine parts like gaskets, roller bearings, pistons, valves and springs weren’t hard to source. Something that is definitely unique to the Group 5 M1 though is the electrical system, but Peter Sauber helped out by putting Adrian in touch with the same guy who worked on it 35 years ago. When he came to the workshop and saw the car again after so many years he was amazed to see his handiwork was still holding up. After six months in the workshop the end result was a car that was as good, if not better, that it was when it was first wheeled out of the Sauber workshop in 1981. 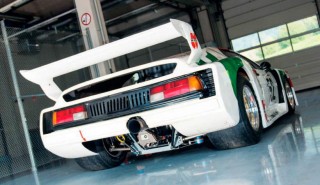 And so came the time for its first test drive to run everything in, which was at a track day at the Red Bull Ring in Austria, where the photos were taken. It passed all of the systems checks without an issue and so for a more serious test Adrian went to Mugello in Italy with the intention of seeing more of what it was capable of. The difference between the production cars modified to race that Adrian was used to and this purpose built, no compromise racer was instantly apparent… as were the complete lack of driver aids, which were still decades in the future when the M1 was made. The hardest thing to get used to was the downward gear shifts. The ‘box is not synchronised so under braking Adrian has to touch the gas pedal to match the engine revs before he can shift down. It’s something that drivers of the 70s and 80s were well used to but it took Adrian quite a few laps before he could do it with confidence… as if you mess it up you will be looking at the corner from the wrong window and end up in the gravel. 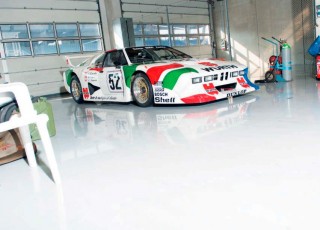 Something that will probably take a lot longer to get used to is the sound of that glorious twin-turbo straight-six right behind the bulkhead. Boost is reduced from the 850hp it was in its racing days so that the engine and transmission are not put under unnecessary amounts of stress, but it is still tuned enough for big bursts of flames to spout out all the back on over-run. And it still has a very healthy 450hp on tap. It’s also light, about 400kg less than anything Adrian has raced before, so it’s easy to get slowed down and turned in (as long as you get the gear change right) but that lightness also makes the car twitchy in some corners. Over the course of the weekend the lap times came down considerably but Adrian hasn’t pushed the car anywhere close to where he assumes its limit of adhesion is though, as it’s far too precious a car to put it at risk just for the sake of it. And not having complete trust in the other people sharing the circuit with him is the reason he is also not too keen to race it in historic events.

But this summer Adrian hopes there will be a couple of guys behind the wheel who know exactly how fast the car can go. He plans to invite both the ex-works drivers, Dieter Quester and Marc Surer, to see the car again and it will also be at a few track days and classic events in 2017. So if you are lucky enough to see it now you know what a gorgeous and unique BMW it is.

The car wasn’t in a bad condition as it had been well looked after in the collection and hadn’t been driven in anger since 1987.

Marc Surer in the Würth car was clocked at 330 km/h (205 mph) down the Mulsanne Straight.

Boost is reduced from the 850hp it was in its racing days so that the engine and transmission are not put under unnecessary amounts of stress.