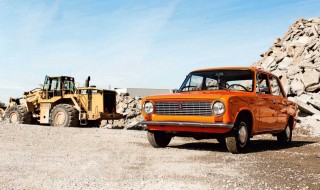 A GM engineer adds a second piece of Eastern Bloc machinery to his Michigan garage. Story by Wesley Wren. Photos by Steven Pham.

CONSIDER THE LADA  For General Motors engineer Bill Treib, tracking down a 1976 Lada 2101 ended up being worth the transatlantic treasure hunt by Wesley Wren.

Imagine the parking lot at a General Motors tech facility. Remember, every person on that campus gets both an employee discount and, almost as importantly, access to the GM product-only parking spaces. If you’re a gambler, it’d be safe to bet that Bill Treib, a driveline engineer, would own something sensible—you know, a Cadillac CTS-V or a Corvette ZR1—but that’s a bet you’d lose. 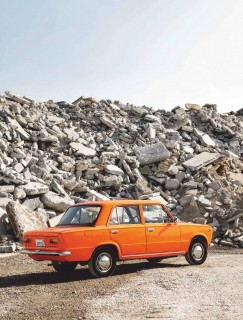 No, Treib went way, way off-brand when looking for a new ride, and no, we’re not talking about Ford. Hell, he didn’t even seek out an Alfa or a Porsche.

For Treib, that isn’t quite as odd as it sounds; he also has a 1988 Trabant 601. “I wanted to experience what it was like to claw my way up the proletariat social ladder,” he says. “The Lada is a luxury car compared to the Trabant.”

How, exactly, did Treib dive into the Eastern Bloc auto world?

“I always used to only drive American-made cars, and I always thought that people who owned foreign cars were weirdos,” he says.

“After 30 years of driving only American cars, it finally started to get stale. You can only look at so many 1969 Camaros before you start to yawn.

“Then, while on a vacation in Berlin, I rented a Trabant for two hours and paid 80 euros for the experience. I was having fun puttering around Berlin in this souped-up golf cart. And that’s when I decided I wanted to buy one and bring it home. To a non-car connoisseur, I would describe it as only eating American cheese your whole life. And then tasting a small bite of French cheese for the first time. And realizing that there is a lot of different cheese in the world, and life is too short.”

If you’re completely caught off guard by this Soviet machine, the Lada is essentially a Russian version of the Fiat 124.

Volzhsky Avtomobilny Zavod, aka VAZ (and now called AutoVAZ), licensed and re-engineered the Fiat, making it stout enough to deal with the often treacherous road conditions behind the Iron Curtain. Branded as a Lada in export markets, it sold under the Zhiguli badge domestically. Near the end of 2017, Treib got to work on finding his dream 2101, doing exactly what you’d do: He hopped on the internet. OK, so he didn’t exactly use Craigslist, and the car wasn’t exactly around the corner. But using Craigslist’s Euro equivalent, he found this car in Rostock, Germany. Just like that, Treib got on a plane and then took a train to meet up with the seller, who met him at the station with the car. After some creative ATM usage, money exchanged hands, and all that stood between Treib and vintage Lada ownership was paperwork. 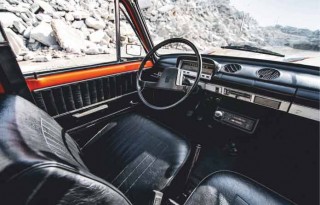 According to Treib, buying a car in Germany as a foreigner is a cinch. “I was in and out in about 45 minutes,” he says, noting that he received all the necessary documents and temporary registration with no hassle. Try doing that in Michigan. Before dropping it off at a port, Treib took the Lada on a little road trip. He tooled around Germany, hitting spots like Hamburg and getting trapped in a blizzard in the process. The storm hit hardest while he was driving on the autobahn, but the Lada, no stranger to inclement weather, handled its own.

After his German adventure, he hired a specialist to manage the legal side of importing a car from overseas. The car was shipped to Baltimore; from there, Treib opted to have it delivered to his driveway. With the car on his home turf, Treib really dug in—and discovered that the original engine had been replaced with an updated VAZ-21011 mill, meaning a larger 1.3-liter inline-four gasoline engine sits in the place of the original 1.2-liter. The bigger motor still has provisions for hand-cranking; it’s something you might not think about stateside, but engineers had the Siberian winter in mind when developing the powertrain.

Finding a source for parts in America might seem like a hurdle, and to an extent, it is. Fortunately, Treib claims getting parts from Europe isn’t hard at all. It might take a few days for the parts to make it to his door, but surprisingly, normal delivery time is usually under a week, and he describes parts availability to be about as good as a new car. They built a lot of these, and many parts carried over to successor models. The last order: a carburetor. Not a rebuild kit or an aftermarket piece, but a new-and-ready carb for that 1.3-liter motor. 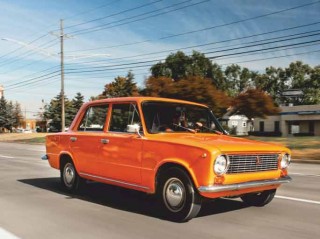 The Lada’s body also got a good once-over from Treib, receiving a fresh coat of Rust-Oleum safety orange. Normally, stripping a car’s previous paint job involves harsh chemicals or buckets of dust, but whoever laid the last finish on this Lada didn’t do a great job. The paint came off with a quick wipe of acetone. Treib stripped the thing before applying the paint himself. Treib said the color is surprisingly close to the same shade of orange he removed.

As an engineer, Treib noticed interesting design decisions on the Lada. Take the rear brake drums, which are aluminum instead of the traditional iron; an iron liner is used for the friction surface. They’re strangely similar to Buick’s popular aluminum drums used from 1957 to 1970.

To squeeze more power out of the aging Soviet machine, Treib installed tubular exhaust headers and plans to put in a new distributor with a more modern contactless ignition, tossing the archaic breaker points ignition on the shelf. “It’s cheaper than doing a tuneup with the old points ignition,” he says. These upgrades won’t make Treib’s Lada the fastest car in Michigan but should make it more powerful and more reliable than stock.

“I haven’t tried out its top speed yet,” Treib says, “because the tires on it still say ‘made in Yugoslavia.’ I’m a little apprehensive to test that out.” Speed runs aside, Treib gets joy out of simply driving and maintaining the Lada. His day job involves working on the next wave of high-tech cars; taking care of a car that can still be handcranked to start is rewarding to him.

Treib offers words of wisdom for prospective Lada owners: “I don’t want a bunch of people buying one of these from an American importer. You’ll see them for sale for $10K-$15K, and I didn’t spend that— and that included my trip to Germany, spending a week in Germany and getting the car shipped home. Don’t buy from the first importer that has one. 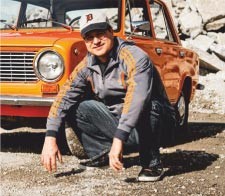 They’re readily available in Europe.” So, plan a real adventure around what is already a left-field purchase. And if you happen to be driving through Michigan in your new-to-you 2101, keep an eye out for Treib—at least when the salt trucks aren’t coating the roads in corrosives. Even though this thing was engineered to survive the treacherous roads of Siberia, not even Eastern Bloc cars are safe from a Midwestern winter.