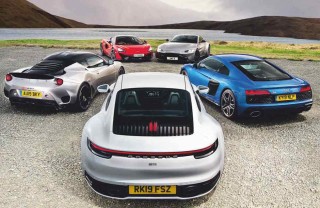 Blurring the line between sports car and supercar has always been one of the Audi R8’s special talents. Not only did it blow everybody away with its incredible proportions when it was launched in 2006, Audi’s first attempt at a mid-engined two-seater was easily the best-handling car the company had ever produced. The high-revving 414bhp V8 was an absolute gem and you could even get an open-gated six-speed manual transmission. It’s easy to forget that the R8 was pitched as a rival to a fairly run-of-the-mill Porsche 911.

A more potent V10 Typ 42 version joined the V8 in 2009, from where the R8 began its foray into the realms of the supercar. With the introduction of the all-new second-generation R8 in 2015, the baby supercar finally graduated. It lost the V8 engine and manual ’box as it moved further away from its sports-car roots but, importantly, it has retained everyday usabiity.

A thorough refreshment for 2019 introduces a sharper look and some suspension and drivetrain revisions to bring this devilish Audi further out of its shell. The epic-sounding naturally aspirated V10 remains, but tweaks to valvetrain and engine management have liberated a further 30bhp. Standard power output is now 562bhp, with 612bhp for the Performance model. Among a sea of turbo V8s, this 8700rpm screamer is utterly beguiling. The R8 always had a sense of theatre but it’s harder and yet faster now, with 200mph a reality. The engine dominates but the rear-biased four-wheel-drive chassis is engaging, the dual-clutch gearbox is savagely quick to shift and it’s a dramatic-looking thing. But as the R8 has evolved, so too has its   original rival, the ‘basic’ 911. In its transition from 997 to the 991 generation, Porsche’s sports car grew larger, faster and more refined. A mid-life facelift then brought new, more muscular flat-sixes, all now turbocharged, and this year’s all-new 992 has upped the size and sophistication again.

We picked a very windy day to try the 992 on some scenic Northumberland roads, including England’s highest B-road, which brought ideal conditions for exploring the latest 911’s talents.

As expected, the winning sports car formula has been honed to new levels of perfection, but is it still right to call the 911 a sports car? Or has it shifted to a higher plane? A lower-powered 992 is on the way, but for now the S offers a boost over its predecessor to 444bhp – a figure that, a decade ago, would have been in the territory of the supercar-shaming 991 997 Turbo. Today’s 911S sprints to 62mph in 3.4sec and can touch 190mph. With four seats, too.

I drove both Carrera S and 4S models, which now share the same (broadened) bodyshell, and the two feel more similar than ever before. The S’s steering is a little more feelsome, though, and this rear-wheel-drive version’s traction and stability are outstanding.

It’s astounding just how well tied down the new 992 feels on these roads. You never forget that you’re driving a rear-engined car, but many of the quirks that made past 911s so different to drive have been smoothed out. The new 992 is a significant step over the 991, but it’s every bit as entertaining – playful, even – giving you yet more confidence to push on towards its exceedingly high limits.

The 992 is probably the last all-new 911 without a hybrid drivetrain, but it’s designed to incorporate one later. Audi, meanwhile, is rumoured to have a fully electric R8 successor in the pipeline. The next ten years will see radical change for these two models but, while they will doubtless be faster still and objectively more capable, I can’t see either offering more driver appeal than they do today. For now, I reckon they are still sports cars. Or maybe super-sports cars.

From top Current Audi R8 is more angular than original but still straddles sports car and supercar genres; latest 911 is better than ever but it’s a shame it has grown so wide.