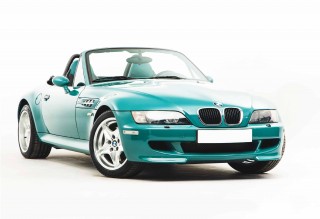 While the looks of the Z3 M Coupé were something of an acquired taste at launch, its Z3 M Roadster sibling received much greater approval from the style police. However, the Roadster lacked the Coupé's torsional stiffness and, as a result, suffered from a degree of scuttle shake which limited the appeal of the car's on-the-limit handling for the most enthusiastic drivers. But the car's allure has increased with age, to the point where it's now seen by many as a collectable classic.

Based on BMW's second-generation E36/7 Z3 Roadster – built in Greer, South Carolina – the Z3 M Roadster was introduced in 1998, and was powered by the S50, 3.2-litre, straight-six engine from the E36 M3, producing 316hp at 7,400rpm and 258lb ft of torque from 3,250rpm. Packing a five-speed manual transmission, the Z3 M Roadster also adopted the E36 M3's brake and suspension upgrades, and could reach 62mph from standstill in just 4.9 seconds. The car's top speed was 155mph and it was also fitted with a limited-slip diff'.

The Z3 M used the broader, six-cylinder Z3 Roadster body, with widened arches accommodating a wider track and fatter tyres. To differentiate it further from the rest of the range, it was fitted with more aggressive front and rear bumper assemblies and some unique side gill vents. It was also the first car to feature quad exhaust tailpipes – that have since become a signature feature on M cars. Changes to the interior included an M-specific instrument cluster, three additional gauges, M steering wheel and gear knob, specially trimmed sports seats, a leather-trimmed centre console and M doorsill plates.

Late 2001 saw the engine upgraded to the S54 3.2-litre straight six, taken from the latest E46 M3, which produced the same amount of torque as the previous S50, but delivered slightly more power (321hp). The model also benefitted from switchable stability control, improved brakes and a tyre-pressure warning system This was the only significant change during the Z3 M's production life, as it didn't receive the facelift that the rest of the range had in 1999.

Total production of the Z3 M Roadster over its five-year life was 15,000 units, with a mere 997 built in right-hand-drive form – 918 with the S50 engine and 79 with the later, S54 unit. Consequently, these cars are relatively rare in today's used market.

"Like other M cars, and cars of this type in general, demand has strengthened in recent years," confirms Robert Redman, forecast editor at trade experts Glass's. "A large influencer on values is mileage, with asking prices starting at around £15,000 for a car with 80-90,000 miles, rising to around £25,000 for an example with 40- 50,000. Condition and provenance are key especially as there were so few options; the main choices being the hardtop and paint colour. Estoril blue is the most popular colour, followed by Titan silver."

"Values have started to climb recently, particularly for the S54-engined cars which are rarer and being carried on the coat tails of the M Coupé," agrees Courtney Mahon at Renaissance Classic Cars. "They represent a huge bang for your buck and we see these cars starting to rise over the next five years." This, of course, only applies to low-mileage cars with great history folders and provenance. "Buy the best you can afford, enjoy it and, in a few years' time, you should see your money back plus the costs of enjoying the car and maintaining it."

I really liked the look of the early 1998 S50-engined Titanium silver example, with a Black Nappa leather interior, advertised for £24,990 at Cameron Sport Cars (cameronsportscars.com).

It's covered a lowly 45,489 miles, and boasts 17in BMW 'M' Roadstar Shadow Chrome alloys, heated seats, air conditioning and was originally supplied new by BMW Park Lane in April 1998. With all original handbooks and two sets of keys, it also packs that all-important full BMW main dealer and specialist service history. Buy a car like this and you can't really go wrong.

If you're looking to put serious money into a longer-term investment, then you could splash out top-dollar on a rare, super-low mileage example, like the immaculate, Japanese LHD example spotted at Millenium Heroes (milleniumheroes.com). This car is priced at a hefty £31,995, but it's only covered 22,538 miles and is in unbeatable condition. With electric windows and door mirrors, heated windscreen washer nozzles, a greenstripe windscreen, air conditioning, a CD Changer and white direction indicators, this Z3 M was first registered in Japan in October 1998. A recent import, the car has been extremely well preserved, and the history file is complete with original BMW book pack and all dealer-supplied manuals.

But you don't have to spend big to buy a decent example, as this Estoril blue 1999 example advertised at Sussex specialists James Paul Blue (jamespaul. co.uk) for just £16,990 shows. A 1999 S50 car, it's covered 77,000 miles, has a full service history and boasts a high spec that includes two-tone black and Estoril blue leather heated sport seats, air con, a CD player, a blue hood and a Harman Kardon Surround Sound System.

"Generally, these are very robust cars," reports Courtney Mahon at Renaissance Classic Cars. "But Vanos units can wear and get noisy, but this is easily fixed.

Suspension bushes can wear affecting the drivability, and tyre wear suffers accordingly." They are also getting to the age now where undersides and sills need to be checked for corrosion. "We've also seen cars with paint peel on plastic trim bits due to over zealous jet-washing," Courtney adds. "Look for an enthusiast-owned vehicle, where money has been freely spent on the car."

The Z3 M was the first car to feature quad exhaust tailpipes, that have since become a signature feature on M cars. Estoril blue is the most popular Z3 M colour, followed by Titan silver.