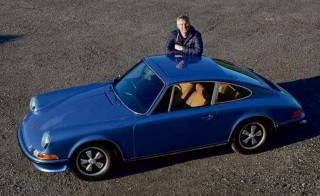 The old ones are the best. Mike Dobby gave up a new Porsche 991 GT3 in favour of this 1972 Porsche 911 2.4S with an amazingly complete history. Words and photography Paul Hardiman.

‘I’d had about 25 911s but never an old one,’ says Mike Dobby. ‘I was driving around in a new 991 GT3 RS in bright orange at the wrong side of 50, feeling a bit of a dick, so I thought I should have something older and cooler. I like old things. I was looking for a pre-impact-bumper model and bumped into Alan Drayson at Canford Classics, near Blandford Forum. I like the 2.4S because it’s less raw and a bit more usable than the 2.2 with its dogleg ’box. I reckon there are fewer now than RS 2.7s, as so many have been made into the other.’ The car that caught Mike’s eye had partially suffered that fate, having been colour-changed to black and then red and latterly growing a ducktail. But it had the most fantastic history.

‘It turned out to be one of only two right-hand-drive ’72s made in Gemini blue. As soon as I heard it was still matching-numbers I bought it, sight unseen. Since buying it, I’ve traced each of the five owners – the last one had it for 34 years.’

That history includes just about every bill, including the first engine service at AFN on 13 December 1972. It totals £13.05, including £1.90 for ‘2½ gallons of Rotella’ [a high-performance oil made by Shell back then]. And lots since, including accident repair and several bouts of getting the sunroof to work properly.

‘It’s a very well-used example – over 240,000 miles – and it was a daily driver until about five years ago. It had been badly bodged; ironic, given that one former owner was in the car restoration business, and it needed a lot of new metal. Inevitably, costs over-ran what it’s notionally “worth” but I bought it because I like it, and I won’t be selling it!’

Alan confirms it was one of the worst he had seen. The restoration took more than two years, returning the 911 to its original 8686 blue paint and beige leatherette. Mike continues: ‘Meanwhile, I tried to contact all the previous owners. The first, Tristan, is still going strong and can’t wait to see the car again. I have a photo of it at his house when it was delivered. It must have been quite a thing to have new at the age of 25. I’ll visit him soon.

‘He sold the car to his brother, Edwin, who has suggested we meet up, and he will give me dinner and a good bottle of wine! The third owner, Nic, is in Dorset. He gave me a picture of the car in black, painted by Roger, the fourth owner. Eithne, Roger’s widow, has been brilliant, finding bits such as the filler cap and the original AFN numberplates. We have a code: she’s “Miss Marple”, and I would get the occasional message saying “Miss Marple has found this…” I absolutely love the provenance, and will be visiting each of the owners in 2020.’

Due to an insurance cock-up, it happened to be Octane that enjoyed this effectively as-new 47-year-old on its 80-mile journey home. Mike followed, occasionally pulling alongside on the motorway for a proper gloat. ‘It looked fantastic on the road – it’s a very cool car.’