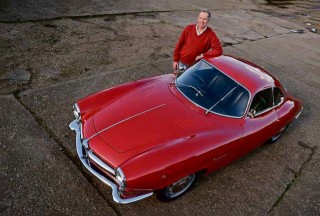 Man & Machine A very Speciale Alfa. Guy Davis found this 1964 Alfa-Romeo Giulia SS irresistible for its history and originality, but he isn’t afraid to use it. Words and photography Paul Hardiman.

Guy Davis’s Alfa is one of 1400 Giulia SSs - and one of the 25 converted when new to right-hand drive by Ruddspeed of Worthing, the exquisitely curvy SS (‘Sprint Speciale’) by Bertones Franco Scaglione was originally based on the 750 and 101-series Giuliettas with a 1290cc twin-cam, but in 1963 it received the 1570cc engine from the Giuliettas replacement to become the Giulia SS.

‘As a little boy I went in one and fell in love with the shape. I’ve been fascinated by them ever since and saw this one for sale at Pendine about five years ago. It’s a 1964 car, converted in 1965, with all the old MoTs and bills. It was owned for 25 years by Tony and Julia Coburn, long-term Alfa Romeo Owners Club members.’

It was Julia who bought the SSV (for ‘SS Veloce’) number plate. ‘It was previously registered KLL and Tony was a bit of a mad driver, so I wasn’t having that!’ she remembers.

‘At every Alfa event,’ says Guy, ‘people come up to me and say “Ah, you’ve got the Coburn car.” It’s only done about 58,000 miles, and is so original that it’s still got the quilted bonnet lining and the inspection light. It also has its original full tool kit that you just can’t find any more - they ’re like gold - plus its ashtray and liner, which I’ve never seen on any other car.

‘I’ve had Morgans, MGBs and a TR6 - all sorts of things - and latterly a DB7 Volante, but this is my first Italian car and it’s a keeper, they’re not massively valuable: it’s less money than an E-type and not like a Ferrari of the same era, which you couldn’t leave anywhere, and that means you can actually use it.

‘We’ve been to France in it, and Scotland. It’s a really good tourer, though I tend to cruise it only at about 70 or so. I’m just having the engine rebuilt as it had a bit of an oil leak, and I didn’t fancy that when doing long journeys.’

Old cars have certainly been a distraction in retirement from a life in the property and garden business; the Alfa is a regular at the Chorleywood Classic and Supercar show that Guy founded 10 years ago, and which has raised more than £55k for local charities. Its various awards at classic car shows in the south of England resulted in an invitation in 2018 to the London Concours, where it won the Remy Martin award. And that led to a week on display in the rotunda at the Royal Automobile Club.

Guy’s love of classics runs yet deeper. ‘I’ve, um, bought a garage. Harris Mayes, a Land Rover specialist in Rickmansworth. It had been in one family for four generations. I’d had a Defender looked after there for years and always pestered the owner to sell. So 18 months ago he got married, at 76, and asked, “Do you want it?” My wife said, “You’ve always wanted it, so go ahead. It’ll keep you out of the house.’