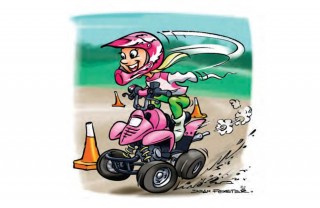 A handicap doesn’t have to be a deterrent. If someone has the determination and support to try something new, anything is possible.

A couple of years ago, Humber College invited instructors from all over Ontario for a weekend of camping, riding and socializing. One of the planned activities during that annual instructors’ rally was a drag race. We were told that if we brought a dirt bike, we could race other instructors for bragging rights. That was when Grant asked if he could bring his Arctic Cat. “A snowmobile?” I asked incredulously.

“You expect to beat my dirt bike with a sled?” I thought the lack of wheels would be a handicap for Grant and that all he’d see would be the rooster tail of dirt my back wheel was throwing. Little did I know how fast a snowmobile could go on grass. All I saw was the track of his sled digging a After congratulating Grant on his my old pal Don Gibson. I’d heard that he wouldn’t be attending due to recent surgery. Yet, there he was with a big bandage where his right arm used to be. His wife had bugged him for months to go get a mole on his arm looked at. But he’d neglected it too long and eventually surgeons had to amputate his arm to spare his life.

We were impressed that Don showed up so soon after his ordeal and thought we should acknowledge his courage and support by presenting him with something at the awards ceremony. Later that day Don and I got up on a makeshift stage, and after I made a little speech, I turned to Don: “Here’s a small token of our appreciation and love for you, Don,” I said. “It should last you twice as long now!” I then handed him a jar of hand cleaner that we’d selected from the donated gifts. Don later went on to ride and master his FJR1300AE, which was the front brake integrated into the foot brake and an auto-shift transmission. Who says you need two arms to ride a motorcycle?

Last summer, we were just beginning an afternoon session of dirt-bike training when I noticed two ladies, two boys and two girls. The boys were the only ones dressed in off-road gear and were ready to ride. Their excited faces were in stark contrast to those of the girls, who had not signed up for training. The smallest girl was too young, but I quietly asked the women if I could offer the older girl a lesson on an ATV.

Ashley was super-excited to ride. We got her suited up, and I governed the throttle down on a little Yamaha Raptor 50. After some basic instructions, Ashley took off and did amazingly well. With the governor all the way out, she never hit a pylon, and whenever I blew my whistle, she performed perfect stops. She rode with one hand the whole time, as she only had one arm. I wish you could have seen the her lesson. The boys also wanted to try the ATVs, but I turned them down. I wanted Ashley’s success on the ATV to be hers alone. That type of lesson is why I love my job so much. With help from my incredible staff, we have helped thousands of folks with various challenges experience motorsports. At the Calgary motorcycle show this past January, I heard a father explaining to his daughter that we were teaching children how to ride. Nikita was 17, but we made an exception to our age requirement (six to 12 years old) to accommodate her. In order for her to have the entire training area to herself, instructors Jennifer and Michelle taught Nikita how to ride during their lunch break. It was pretty incredible to watch; folks in the crowd cheered and there were even a few tears. You see, young Nikita can’t see. Blind since birth, she still had the courage to try riding. Nikita may never ride on the street, but she did get a taste of the sport we all love. She was also an incredible inspiration to the rest of us, as we sometimes let our physical limitations hold us back.

Before Nikita, there was Molly. Molly lost her eyesight to retinitis pigmentosa, which is a blinding eye disease that the Ride For Sight raises funds to combat. We taught Molly to ride an ATV by giving her directions through a radio zip-tied to the handlebars. I still remember the excitement on her face. From my experience, a handicap is not a deterrent. It is an inspiration.