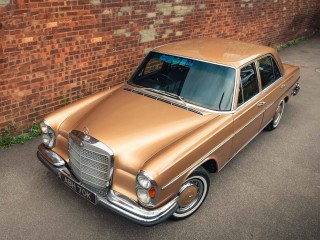 Two hundred ponies. Three and a half litres. Eight cylinders. Mix with Paul Bracq lines and you’ve got a compelling combination. Produced between 1970 and 1972, the 280 SE 3.5 introduced the M116 V8 to the short-wheelbase W108, creating a prototypic super saloon and a performance legend. Mercedes was on to a winner. Needless to say, searing in burnished amber, this 1971 example owned by Phil James more than deserves its gold paintwork. 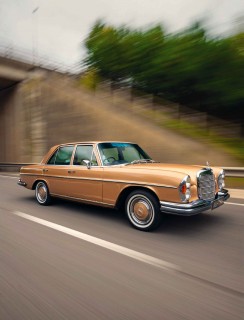 He’s favoured large Mercedes cars for decades, having been introduced to the marque’s merits by a 1981 W126/V126 500 SEL many moons ago. The car belonged to his first boss. Even so, Phil found himself despatched to recover the louche leviathan after it suffered a breakdown. “I was nineteen years old,” he recalls. “I got the car up and running and was immediately taken aback by how fast it was. It felt as though I had to keep my foot on the brake to maintain a steady 30mph!”

Five years later, the very same Benz-badged beast was being readied for sale. Phil didn’t think twice. Despite the car going on to provide him with faithful service, however, he had his eyes on the top rung of the ladder: a 560 SEL V126 complete with every factory option. A dark blue example benefitting from individual rear buckets, full hydropneumatic suspension and all the toys joined the 500 on his driveway in 1992, but the new arrival’s presence signalled the end of the smaller-engined W126’s time at the James residence. “My old boss was keen to get his car back. I ended up agreeing to sell it to him. To this day, I can’t believe I parted with such a brilliant Benz. I must have suffered some form of mental lapse!”

The unique 500bhp TVR Boss Cerbera and a Lamborghini Diablo followed before Phil was presented with the opportunity to buy another mega Mercedes. The car in question was collecting dust at the back of his friend’s paint shop. The mention of stacked headlights and 280 SE 3.5 badges on the car’s boot lid was enough of a temptation for the boy from Buckinghamshire to register his interest, but he wasn’t sure he was interested enough to buy. A short while later, his phone rang with news the car had found a new owner. You snooze, you lose!

How much had the car sold for? Phil had to find out. “Surprisingly affordable,” came the response. If he’d have known the acceptable sale price was so low, he’d have bought it himself. “Well,” said his friend. “If you’re still interested, I’d rather sell it to you.” The deal was done, and two potential plans for the project swiftly developed: if the car was in good overall condition, it would be put back on the road after necessary recommissioning work, but if the snoozing four-door proved to be a rotter, it would be turned into a Red Pig replica racer and punished at the track.

On arrival at Milton Keynes-based marque specialist, Autoclass, the 280 SE was treated to a thorough inspection. The results tipped Phil’s plans towards preservation; despite sitting in storage for a decade, the 3.5-litre engine was in good condition and the body was largely free from corrosion. “It looked worse than it was,” he confirms. “The car had been partially stripped, much of its exterior trim had been chucked into the boot space and panels appeared to have been flatted back ready for fresh paint. Funny little things like the bonnet latches needed to be replaced, but those parts are easy to obtain direct from Mercedes.” Fresh fluids, filters, a full service and concerted work on the Bosch D-Jetronic electronic fuel injection system was all the car’s beating heart required. Only the condition of the paintwork stood in the way of a rapid return to the road. 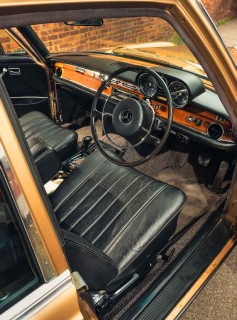 Impressed by the full respray they’d given his 560 SEL a few years earlier, Phil asked the guys at Autowerx Bodyshop in Milton Keynes to get his W108 shining again. Working from a paint pot found buried in the car’s boot, the team replaced the original straw-tinged gold with its current brighter shade. Warm and full-bodied with bronze undertones, the gorgeous finish draws stares whenever it’s on display. “The colour looks great, even when covered in a layer of road film,” smiles Phil. “People always want to stop and talk to me about the car whenever I’m filling up at a fuel station. I never imagined folk would be so enthusiastic about my Mercedes. They certainly don’t expect me to tell them I use it as a daily!”

It’s the attention to detail which brings this build to completion. All five wheels, including the spare, have been fitted with Galaxy R1 whitewall rubber supplied by North Hants Tyres, while pre-1975 black and silver registration plates add an extra air of authenticity. Not content to stop there, Phil even attended our photo shoot with his feet tucked firmly into gold-flecked Jeffery West suede winklepickers! “I only ever wear winklepickers,” he admits. “The guys at Jeffery West come up with incredible creations. This pair matches my Merc!” For three years, this wonderful W108 has served as a dependable daily companion. Living outside and used in all seasons, the big-grilled Benz has covered 15,000 miles since Phil returned it to the public highway. Occasional air locks in the power steering system have been the only cause for complaint. "The car has demanded little from me other than routine servicing. It’s a cared-for Mercedes, but it isn’t mollycoddled. When I’m ready to embark on long trips, all I do is look at the oil level, check tyre pressures and get going,” he says, referencing the historic race meetings at Spa Francorchamps he attends with his retro ride ably fulfilling its role as his transport of choice.

Previously, he’d used a Lamborghini Espada to carry him across the continent. As you’d expect, differences between the big V12 grand touring coupe and his Benz are pronounced. “At first, friends would ask me why I hadn’t turned up in the Lambo!” he laughs. “I wouldn’t have a word said against the car, but I don’t mind admitting an Espada is a physical machine to drive. In contrast, the Merc is an easy cruiser. I love it!”

Despite his apparent need for speed, Phil has no plans to play with his 280 SE’s standard specification. Furthermore, he hasn’t a desire to sell the sensational saloon any time soon. “Oh no,” he stresses. “Where would I find another classic like this? It eats miles, it looks fantastic, it’s utterly usable and I can go anywhere in it. This car has exceeded all my expectations!”

His vote of confidence reminds us of The Life and Death of King John, where Shakespeare suggested there’s no need to “throw a perfume on the violet” and said nothing was to gain from “painting the lily”. Indeed, if you have a W108 280 SE 3.5 that performs and looks as good as Phil’s at your disposal, why “gild refined gold”?!

Any racing fan will know why Phil was considering turning his gorgeous gold W108 into a Red Pig replica: the one-off 300 SEL fielded by AMG in the early 1970s is one of the most famous touring car racers ever built. With wide arches, wider tyres and a bored-out 6.8- litre V8, the Pig had pace to spare at Spa when it defied critics to finish second overall and first-in-class at the Belgian circuit's twenty-four hour endurance race in 1971. Denuded of its bumpers and painted bright red, we can only imagine what the 400bhp monster looked like to other competitors! Originally developed by a covert team of Mercedes engineers, the project raced successfully in Macau before being sold to AMG. Thus, the Rote Sau was developed for its greatest success!

Worst thing about your W108 280 SE 3.5 It's tough, but if I had to nit-pick, I’d say the car’s poor windscreen demisting abilities

Below Slushbox makes for effortless continent cruising in Phil's magnificent Merc Bottom The car's user interface may be simple, but there's no denying its retro chic. 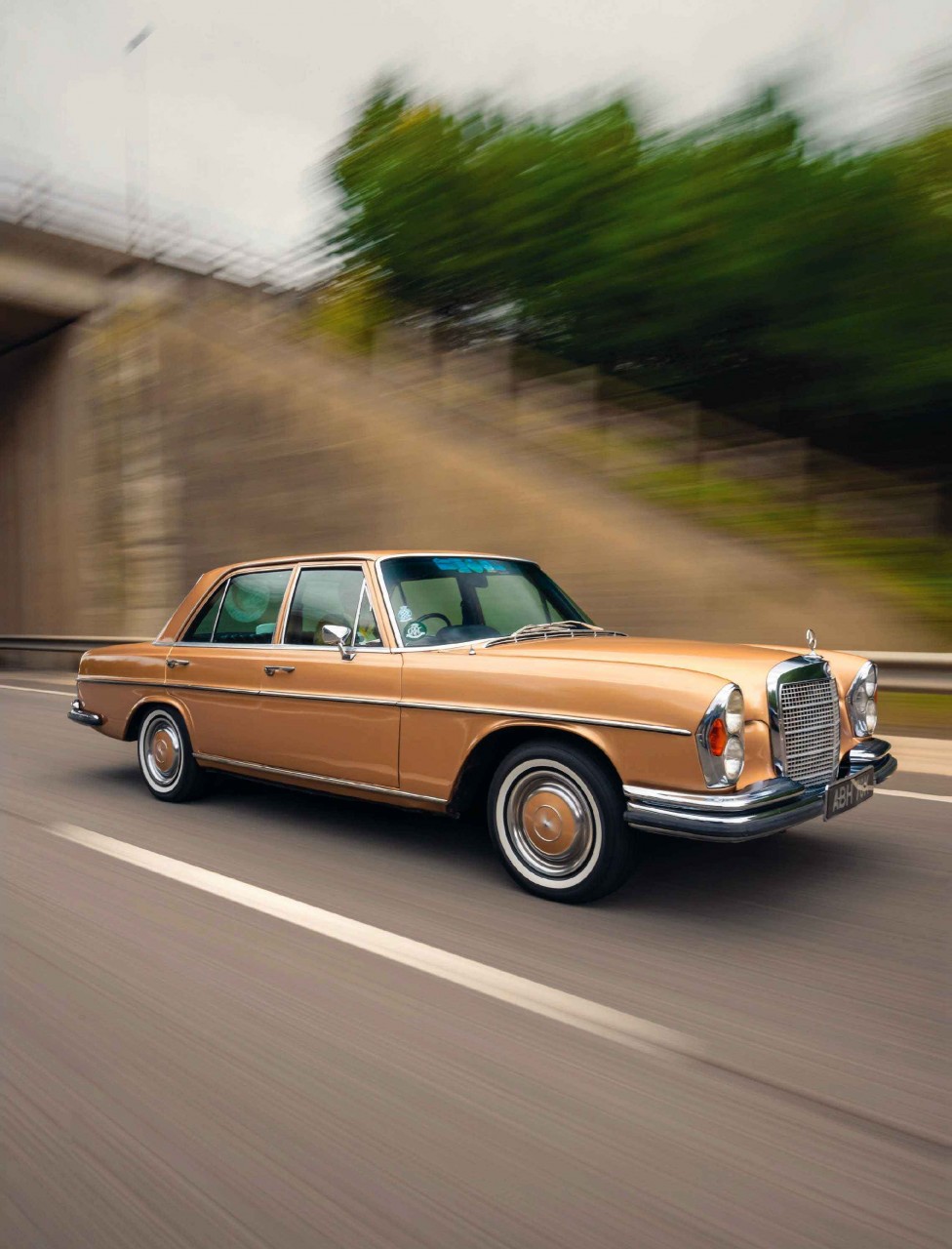 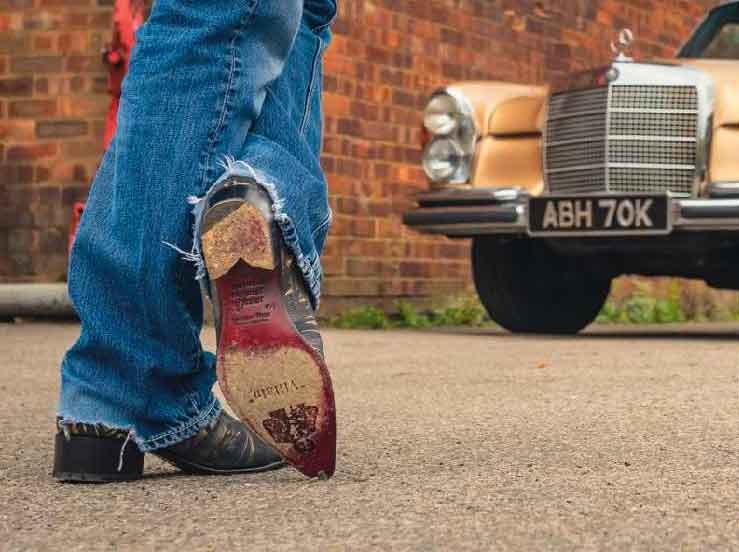 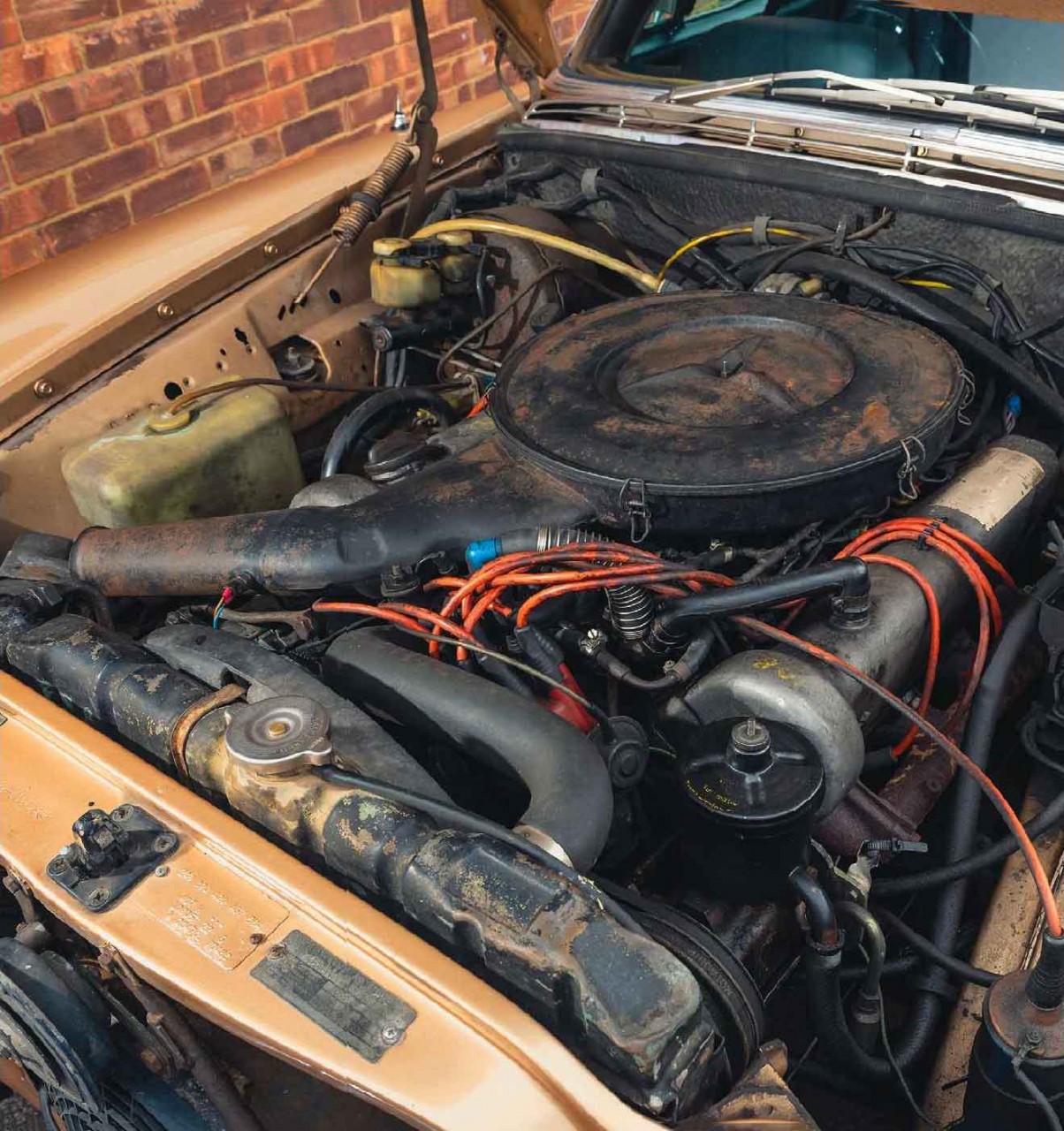 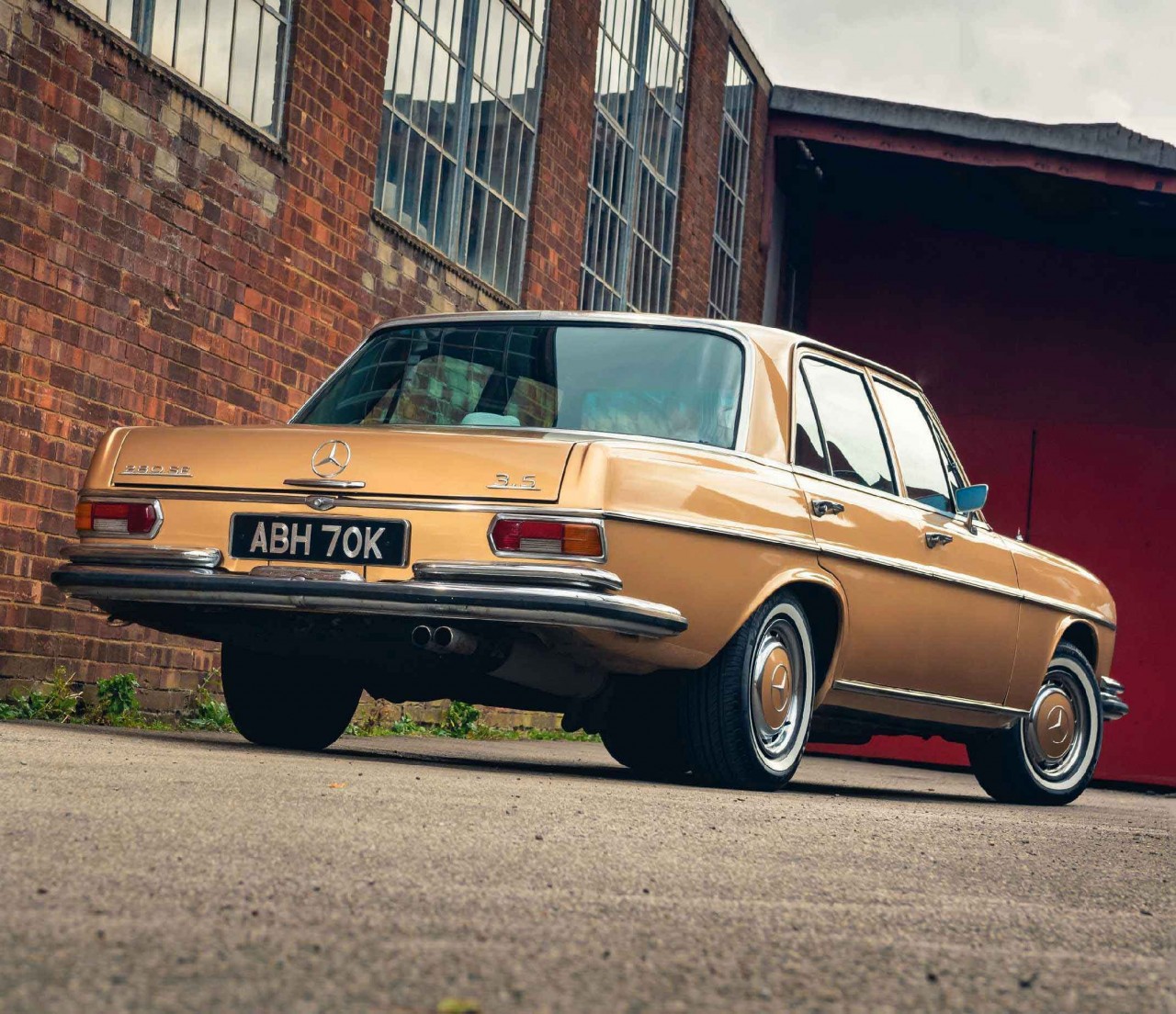 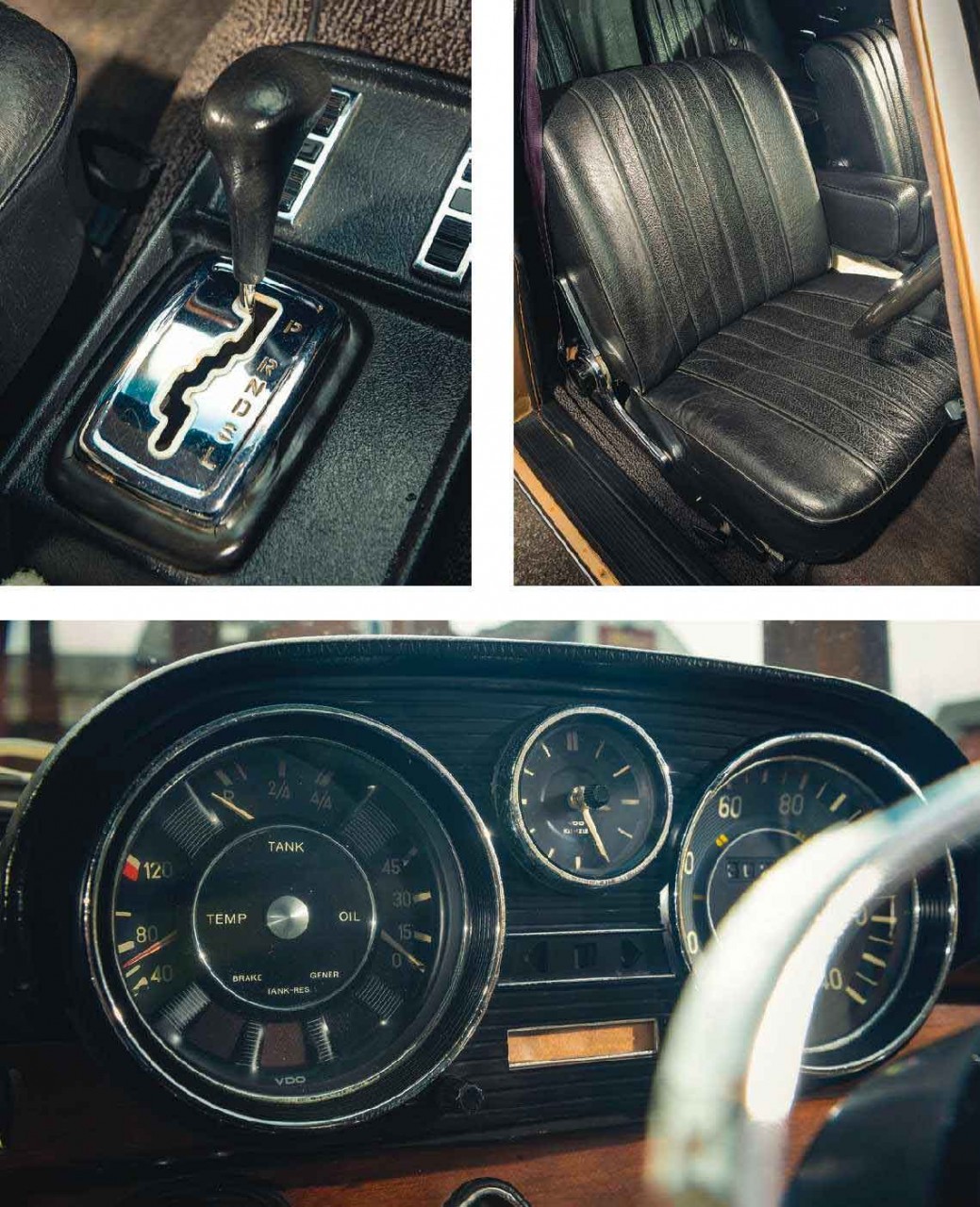 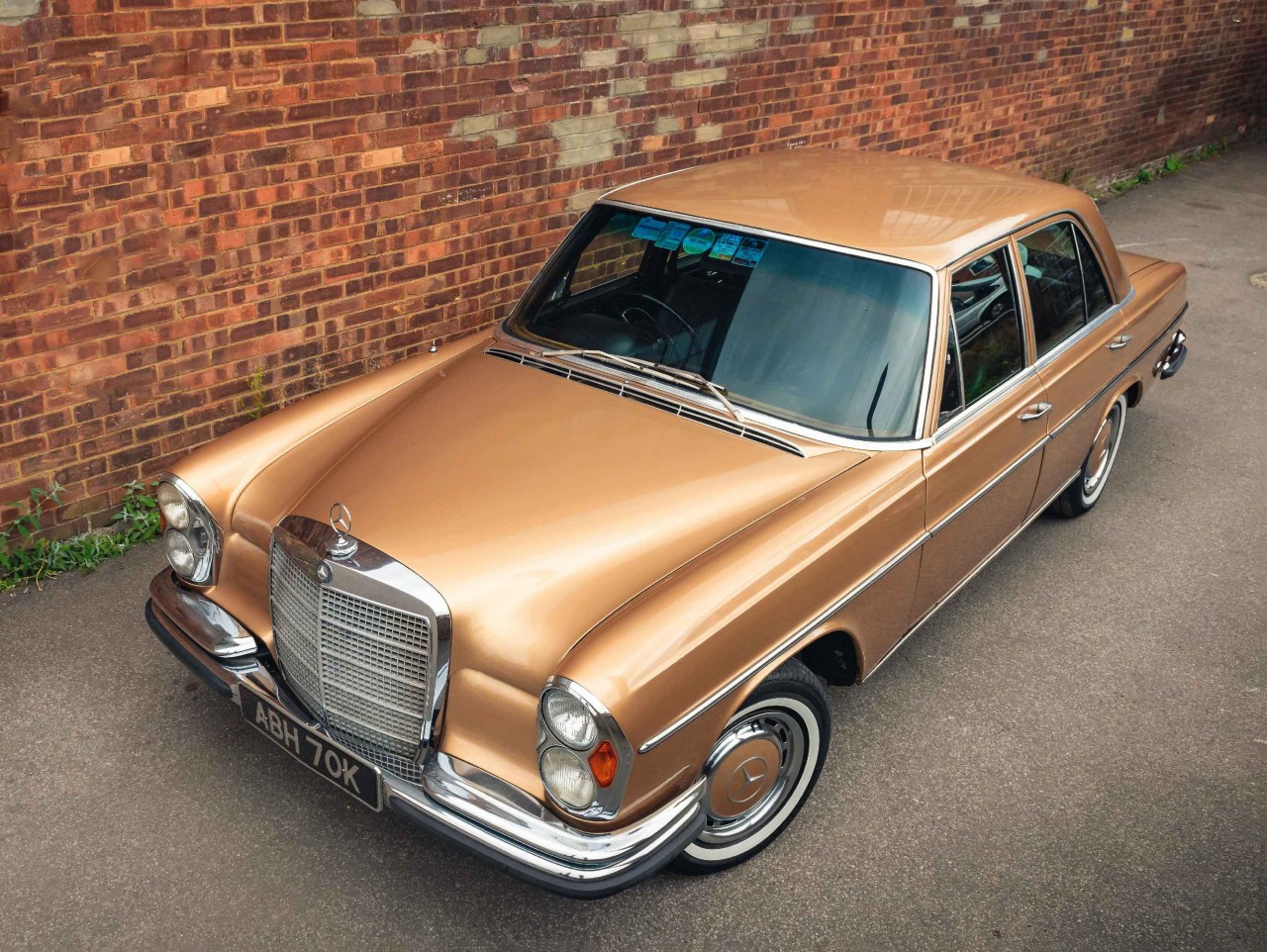 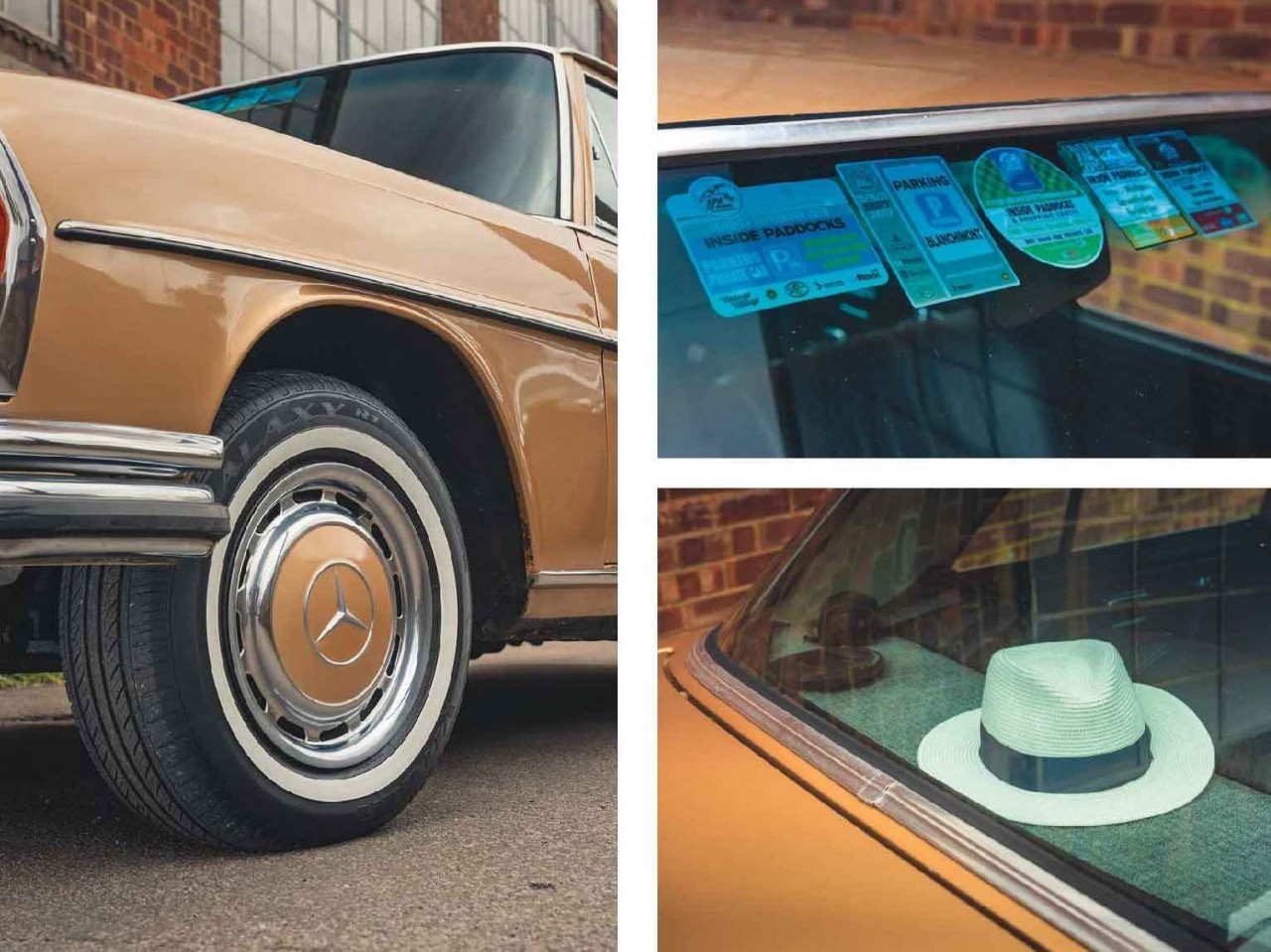 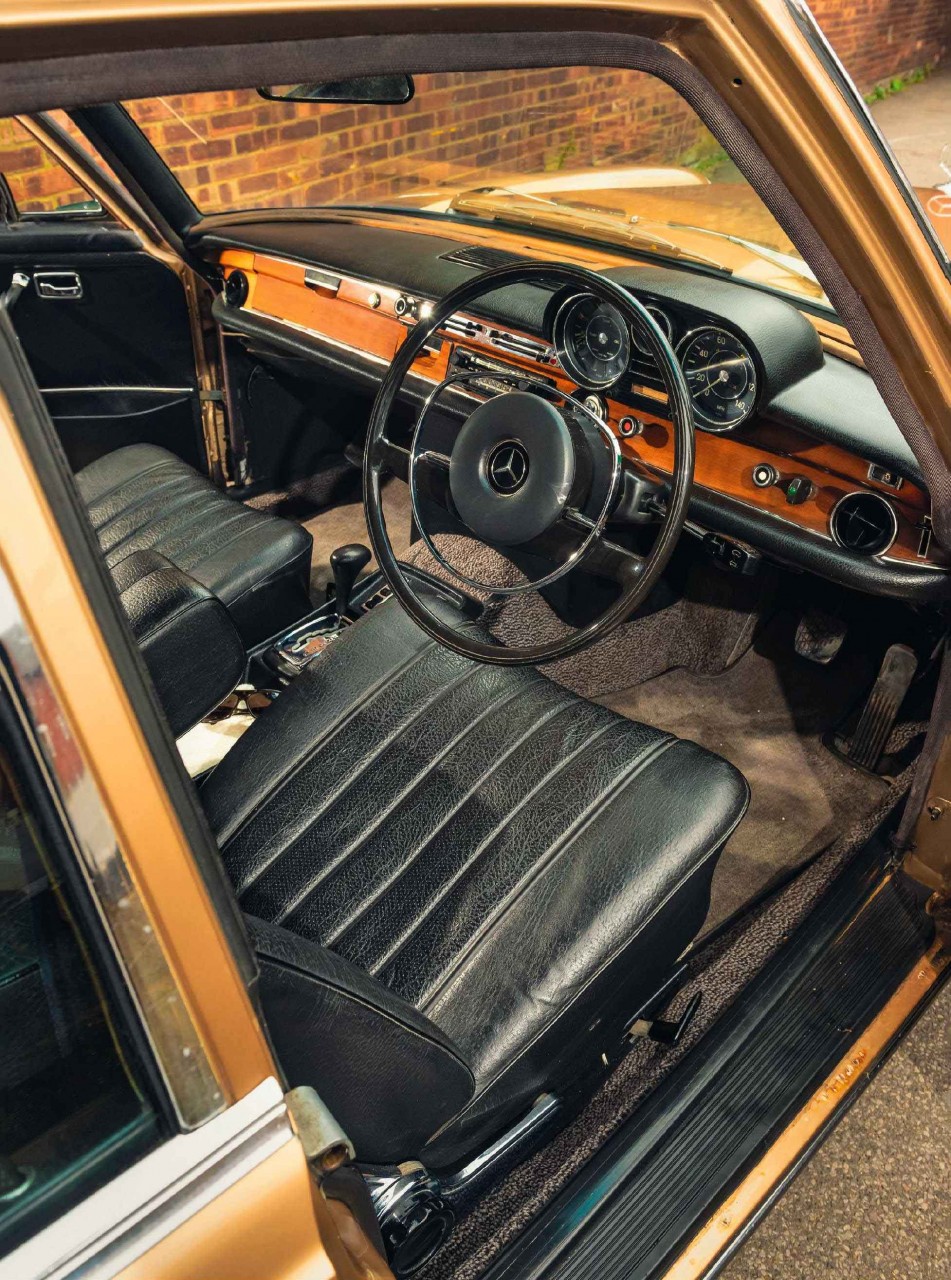 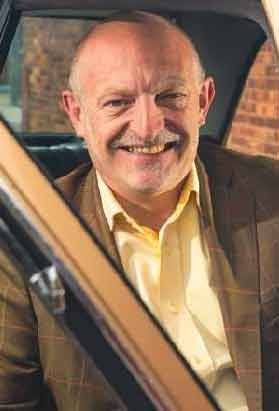 Above Galaxy whitewalls add extra depth to the car's exterior Left Phil is proud of the fact his W108 is used in all weather and covers many miles. Above Gorgeous paintwork was applied to the car by the guys at Autowerx Bodyshop in Milton Keynes Facing page A lazy old Benz is a comfortable place to be when it comes to long journeys.

IT'S THE ATTENTION TO DETAIL WHICH BRINGS THIS BUILD TO COMPLETION