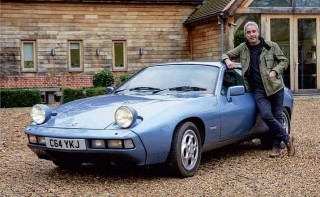 As an engineer and fine watch specialist whose company machines parts to a tolerance of five microns - a tenth of the gauge of a human hair - Giles English has an appreciation of machines that are engineered to last. ‘You love objects because they’re beautiful,’ he says, ‘and, like watches, old cars will go on forever if you service them - and with no depreciation! Depreciation, and the hateful disposable society we live in, is why I don’t like buying new cars.’ English is a long-term Porsche fan. He bought a 1973 911T with his first paycheck, when aged just 21, and he’s loyal, too - he still has that very car and recently drove across America in it.

The front-engined V8 GT epiphany was more recent, but goes back to his youth: ‘Everyone remembers Risky Business with Tom Cruise, but for me it was a friend’s dad who had a 928 when I was young. Almost three years ago I thought “Let’s get a 928” and it went from there. It’s an S2, but it’s the 1986.5 model meaning it has S4 suspension and brakes, but simpler wiring and is 70kg lighter. I wanted a manual, plus the rarer car holds its value better, and I got it from James Dennison of Brightwells. It had been owned by car designer Sam Livingstone, who’d backdated the looks, deleting the side strakes and front and rear spoilers, and fitting earlier teledial wheels.’

It is still 32 years old, though, so surely it is a bit ragged around the edges? ‘It’s as solid as anything - the engineering is incredible and it’s beautifully made, galvanised with some aluminium panels so there are few rust issues. It feels like a modern car to sit in, and to drive; it’s fast, comfortable and not stressful. I love the way the instruments move when you adjust the steering wheel, though the clutch is a bit heavy- after a long time in traffic, the air-con has gone but that doesn’t bother me, and I put a new stereo in it, which sounds better than the one in my wife’s new car. The engine was rebuilt 35,000 miles ago and I might have to get it done again because it’s developed a little oil leak.’

So the big bills these cars are notorious for racking-up could be about to start rolling in. Even if they do, English says: ‘Pound per mile or hour of use it costs less than my wife’s BMW. Yes, you have to spend a bit of money on them, but it’s not depreciating, you can get parts and tyres are cheaper than for modern supercars. I do around 10,000 miles a year in it - it’s now up to about 150,000 - and I reckon I get 21-22mpg.

‘Porsche 928s have a bad reputation for electrical issues if they stand, but this one doesn’t stand because I commute 100 miles a day to Bremont’s manufacturing base in Henley. It’s the same with aeroplanes - some develop a reputation and then you fly one and find they’re no problem. I’ve changed a few switches that went sticky, and when an electric window went I bought the parts online and fixed it myself. I’m also lucky that we’re near a good specialist, Hillcrest Motors in Nettlebed, whose owner, Simon Hope, really understands the cars.’