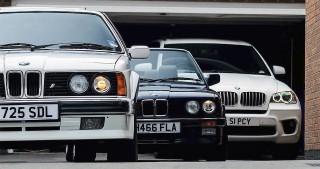 What’s in your Garage? We meet a man with a mix of old and new BMWs. We meet one man who has had plenty of modern BMWs over the years, but has lately turned his attentions to some modern classics, along with an X5 for his wife… Words: Simon Holmes Photography: Steve Hall.

As you might imagine, we tend to meet plenty of loyal BMW enthusiasts when doing these What’s in your Garage? features. And whilst slowly perusing these fine collections, it’s always interesting to listen to the owner’s story. It’s the tale of how they became so enchanted by the Bavarian brand that they couldn’t help having more than one in their possession and their tale is usually centred around a single, key piece of information that inspired them. It frequently tends to be either a taste or trait picked up or passed on from someone else or a fond memory or experience growing up. Talking to Steve Pearcy, the proud owner of the cars pictured here, he mentions that he has early memories of BMWs, but that doesn’t fully explain why he’s since owned 14 BMWs over the last two decades or so! 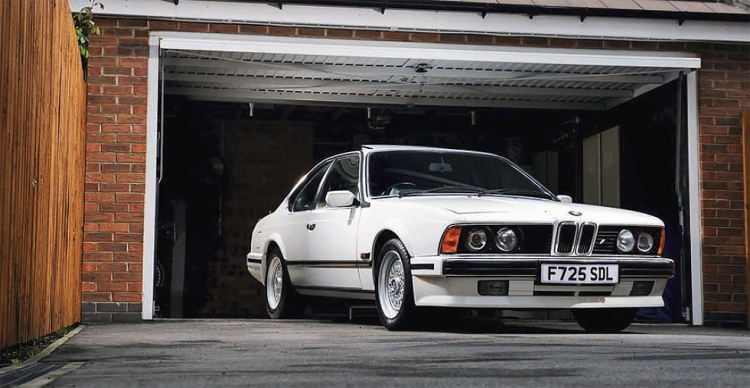 “My dad was a mechanic for many years and always had cars around ever since I was young, so I’ve always been interested in anything with wheels,” he recalls. “I remember a friend of my dad’s, a vicar in fact, who had a 2002tii and a damaged 2002 turbo at his house and I used to sit in them when we visited.”

“I love my cars and I don’t ever put my foot down in them, I just enjoy them. They are tucked away, maintained and looked after”

Although that got him started with cars that wasn’t enough to ignite his passion for BMWs. Instead, that side of things came later, after Steve had learnt to drive and he happened to have a good friend that gave him an experience of the brand that left a mark, as he explains: “My friend worked for a BMW main dealer years ago and he used to let me borrow loan cars on a regular basis. I was allowed to borrow anything and in my early 20s I was often driving around in new M3s or M5s and I even borrowed an E31 8 Series, which was a very expensive car back then.”

It was enough to convince Steve that BMW was the marque he wanted to drive from then on and after savouring his loan cars he took the plunge and actually bought a BMW for himself. But his long-lasting relationship began with more humble beginnings in the shape of an E36 318is that was a few years old. He then moved on to a second-hand six-cylinder 323i Coupé and then an E46 330i before treating himself to a brand-new 330Ci M Sport in 2003. By then he was well and truly hooked and over the next few years Steve side-stepped his way through a vast array of BMWs, covering just about every kind of model in the range from the last decade or so, ranging from a E63 645Ci to a Phoenix yellow E46 M3. He even convinced his loving wife to embrace the brand so there were often two BMWs parked in the driveway.

Then, after a few years, when Steve’s kids had grown up a bit and the family moved to a house much closer to his place of work, Steve decided he didn’t need an everyday car anymore. This was no bad thing as, instead, it meant that he could indulge his passion for older and slightly less practical everyday cars, namely BMWs from the 1980s.

“When I moved I got the bug for classics, or modern classics as you might call them. These were the kinds of cars I wanted when I was younger but couldn’t afford,” he recalls. “After a while of looking I mentioned to my wife that I wanted to buy a E24 635CSi as I had liked them since I was a teenager. It had to be a Highline, as although I would have loved an M635 they had started going for much more money, so this seemed like the next best thing.”

Steve began scouting the internet for suitable cars and being a bit of a perfectionist at heart he wanted a good, clean example. He soon found this fine example for sale at a classic car dealer that tended to deal in high-end cars and although it was the first he went to see, he ended up taking it home. With just 57,000 miles under its belt it was in fantastic condition, having been treated to a restoration in the past but there was still a couple of niggily things it wanted: “Just little bits like the odd suspension drop links and pitman arms needed doing and it was on 8 Series wheels when I got it, so I found a set of genuine TRXs and sourced some tyres as I wanted it to look original.”

A set of replacement roundels were also fitted to freshen up the details and keen to keep it looking neat and tidy in the right places, Steve also smartened up the engine bay by painting the rocker cover and re-wrapping the wiring loom among some other intricate details. But although Steve likes the car to be right, that’s not to say it’s just a garage queen that lives its life behind a closed door. Instead, Steve chooses to enjoy it at his leisure: “I use it on Sundays to take the kids somewhere or sometimes I take it on a jaunt to nowhere. I do a 50-mile drive in it just for the sake of it. I do also take it to the odd show.” 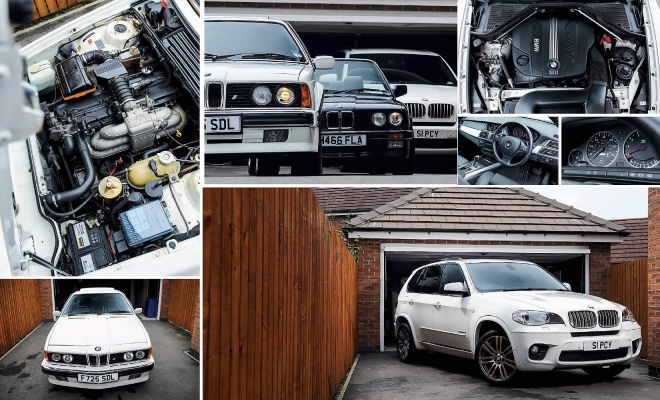 With a modern classic parked in the garage to keep Steve happy, next came the 2013 E70 X5, which joined the household some 18 months ago. This Alpine white M Sport xDrive30d was bought brandnew from the dealer and it joins the 6 Series as a compromise to his understanding wife, Kerry. “My wife had always wanted an X5 since it was launched and as she supported my many BMW purchases over the years it was only fair we bought her one.”

It’s obviously a very different car to the Six and although Steve still drives it from time to time he’s happier behind the wheel of his own classic car.

After a few months of 6 Series ownership the car was in fine form and together with a new X5 on the driveway that meant his wife was happy, all was well in the Pearcy household. But then the idea soon came about to give Steve’s beloved 6 Series a companion in the empty spot next to it in the garage… “I had spent about nine months tinkering away with the Six and got it to the point where I was happy, but then I found myself with some free time. So it seemed like a good time to move on to something else and I began looking at another car I wanted as a teenager; an E30 3 Series.” 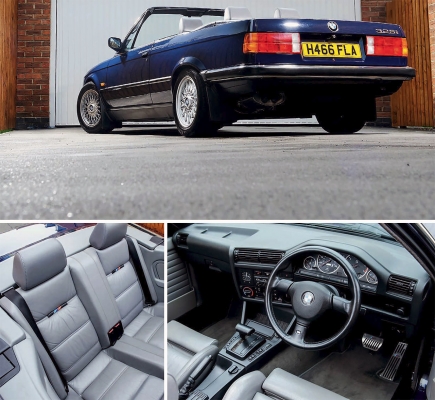 When this fine example came up it fitted the bill perfectly; a clean E30 325i automatic with just 67,003 miles on it and finished in rare Atlantis blue. And as a plus point it had the manual roof Steve preferred as he didn’t want the associated issues that can arise with an electric one. The car was tracked down on the internet classifieds and it all seemed ideal except for the small fact that it was located some 320 miles away in Scotland! But Steve felt it was a good car with an honest seller, and when he asked for more photos and information and the owner promptly sent him a few dozen detailed images. That was enough to warrant making the trip up north to see it.

“It did look good and ticked all the right boxes, so I took a risk on it and went on the train up there to see it,” Steve recalls. “The owner had told me it was immaculate and when I got there it was, so I bought it there and then and drove it home. I seem to have a knack for buying cars and getting lucky. Both were the first I had seen in the flesh and being old cars there is a risk but they have turned out to be good cars.”

Again, like his 6 Series, Steve wanted his new purchase to be perfect and original so the aftermarket exhaust system and clear indicator lenses that had been fitted were hastily replaced with standard items. Then it was a matter of addressing the small but annoying issues. “The car needed drop links, the rocker cover painting and the diff oil seals replacing, but I do little bits like that in my garage,” says Steve. 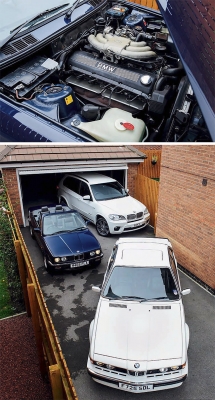 Much like the Six, the car has since been put to good, leisurely use and the roof is folded down regularly although with the weather turning colder the car will be parked up for its winter hibernation next to the 635 in the garage, both under tailored car covers.

Steve is clearly passionate about his cars but it’s easy to tell from speaking to him that the big, white 6 Series is his personal favourite. “I prefer older cars, they drive with more character,” he enthuses. “These cars are my pride and joy and the 325i is nice to drive but the 635 is so much smoother, you can tell straight away it’s a GT car. It would take a lot to make me sell it. But it’s great to open the garage door and have a choice and on a hot day the roof comes down on the E30 and I’ll use that. I love my cars and I don’t ever put my foot down in them, I just enjoy them.

They are tucked away, maintained and looked after.” So are there any plans to expand the collection further? Aside from the lack of garage space to actually house any more, that’s not stopped Steve thinking ahead and mentions he would love to own a 3.0CSL or a 2002 Turbo one day. “They are my ideal cars but I know they are probably out of my reach,” he confesses.

“We are currently looking at an X5 replacement in the form of a 430d M Sport in Estoril blue and I have a cheeky eye on a certain black E28 M535i on a specialist classic BMW website”.

One thing seems to be for sure and that’s the current modern classics residing in this garage won’t be going anywhere for a while. And now we know the reason why Steve likes his BMWs so much…

Steve also has a passion for drawing cars, trucks and bikes and these have developed into a portfolio that inevitably contains many BMWs. These can be viewed at: www.redbubble.com/people/mrstevepearcy.