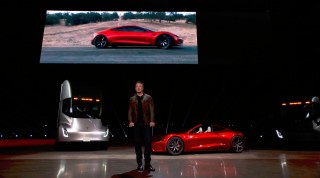 Elon Musk unveiled his new Tesla truck in November, of mild interest because it involves transport. Far more exciting was the second surprise – a new Tesla roadster with a top speed of over 200mph, 0-100mph in 4.2 seconds, a quarter-mile time of 8.9 seconds and a range of 600 miles on a charge. This could be the greatest gamechanger in the history of supercars.

Supercar manufacturers are in the same boat as the Swiss were 30-odd years ago, when more-accurate digital quartz watches from Japan became popular. Why spend thousands on some intricate handmade device with springs and complications when a tiny circuit board and a beautiful dial does the same thing? The mainstream press cringed at the $200,000-plus price of the Tesla roadster, but considering it’s faster than everything from a McLaren P1 to a Bugatti Chiron, and a tenth of the price, it’s an amazing accomplishment.

How many people who buy supercars really know what’s under the bonnet anyway? Let’s face it, once Mercedes-Benz and Porsche get involved in building electric supercars the internal combustion engine could go the way of the manual gearbox. There’ll always be a few people who want them, but not enough to justify the cost.

Imagine a supercar with no maintenance of any kind, no $10,000 first service, no outrageous fuel mileage or fuel prices to contend with. The last time we had a similar problem was at the beginning of the last century. Steam, electricity and internal combustion each had a third of the market. Steam had an edge at one point because it had been around for 100 years, powering everything from ocean liners to trains and automobiles. There were plenty of steam men around who understood it, often stressing how quiet and reliable steam cars were compared with those shrieking, banging, explosion-engine cars.

Electric cars had the battery-recharging and range problems they’ve always had until recently. They were seen as safe, slow and reliable, perfect for the wife because she could only go a few miles from home and there wasn’t much chance of her running off with the handyman in your new Detroit electric. Consequently, most electrics were marketed to wealthy upper-class women as a personal shopping car. And, as automakers have learned, you can’t sell a man a woman’s car.

‘OPENING A TESLA’S HOOD IS THE MOST DISAPPOINTING THING, BECAUSE THERE IS NOTHING TO LOOK AT’

Steam cars like the Stanley and the White were actually quite dependable. The Stanley was simple, with only about 13 moving parts in its non-condensing two-cylinder engine, but it took about 20 minutes to heat up 15 gallons of water before you could depart. The White, however, was truly an Edwardian scientific instrument. Instead of a boiler it used a steam generator that worked much like a tankless water heater, making steam on demand rather than storing it the way a Stanley did. An ingenious device called the flow motor mechanically balanced temperature and water, and you could pull away in under 10 minutes. The White also used super-heated steam, which made it more efficient. In America the White was the first military vehicle, as well as the first White House car.

Sadly for those two, internal combustion technology was moving at breakneck speed. The final nail in the coffin for steam and electric was the self-starter, invented by Charles Kettering in 1911. Five years earlier he’d replaced the hand crank on the products of the National Cash Register Company with an electric motor. He geared one up to start a car, so ending steam and electricity’s only advantage.

How do traditional supercar makers fight the electric onslaught? Pagani’s got the right idea. You make a car so beautiful, with details so intricate, that it becomes a rolling piece of sculpture. Vacheron Constantin built a watch called the Tivoli, the most complicated watch ever made. Do you need a watch like this? No. Do you want a watch like this for its beauty and mechanical intricacy? Of course.

So wouldn’t it be fun if supercar makers allowed us to see their intricate work in action? My 1983 Ducati Desmo motorcycle has a glass window at the top of the bevel drive that opens and closes the valves, but opening the hood of a Tesla is the most disappointing thing in the world because there’s nothing to look at. Imagine opening the rear hatch of your Porsche to find a clear valve cover that allowed you to see the cams and valves in action. Better yet, a window in the side of the crankcase, which allowed you to see the rods going from side to side. Even better than Netflix!