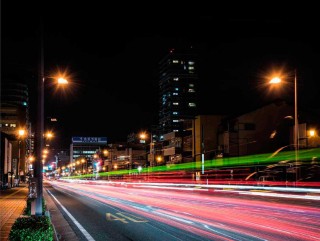 A thundering V12 for company makes light work of the dash to a modern motoring Mecca.

Motorway miles tick by, but eyes grow heavy. A can of something sweet and caffeinated staves off slumbering, but not for long. Some services. A corner of the car park. Recline the seat and… sleep. This brings a whole new meaning to ‘waiting at the lights’. Everywhere you look there are flashing, static or strobing specks with colours seemingly spanning the known spectrum and beyond. From the muted, mundane glow behind office windows to bold advertisements on screens and the wacky warning lights that mark out roadworks like miniature funfairs, everything is lit up. Exacerbated by the night, it’s a fluorescent soup that your eyes struggle to drink in.

Painted on the road are big white zebra stripes to channel human traffic across wide open tarmac spaces. But there are no people. No traffic, either. It is strangely still. It is lumière without the son.

Reach across with your right hand and select first. Luckily the vision from behind the flat-bottomed wheel is exemplary, the glass surrounding you so that it feels more like the canopy on a fighter jet. More revs than necessary, no finessing the clutch and a perfect V12 soundtrack rises up amongst the twinkling towers as the rear tyres paint two neat black lines across white.

Second, third, fourth and the lights become a vibrant blur in your peripheral vision. A road above you. A ramp to the left. A split-second decision and you’re climbing on a curving concrete corridor like a pinball in Tokyo’s machine. One lane becomes two as you join the Shuto Expressway. The car breathes with the road beneath you, the damping delicious. Flashing arrows point the way, Ridge Racer released from the digital into reality.

Although the car is wide, the steering is so precise and the suspension so communicative that you can thread your way through the tunnels and constant corners with confidence. And all the time that spine-tingling yowl, the sound rising and falling both with the throttle and the ever-changing proximity of the structures around you.

This, you now recognise, is the Bayshore Route. Home of the Mid Night Club. Surely it would approve of these empty roads. Time for a top-speed run. The Zonda feels like it should be good for more than 200mph but, as the lights of the city diminish, 199mph is the most it will manage. Fast enough as you flash across the bridge above Yokohama Bay, a sparkling Italian jewel dashing towards the docks and Daikoku PA. The road circles the famous parking area like some automotive holding pattern and below you see, finally, the lights of other cars. As you pull up in a corner of the car park, silence the Pagani’s theatrical Saturn rocket exhausts and get out to look at the nearest M-spec metal, the cold hits you. Your neck feels stiff. There is a Trueno with one headlight up and cautiously you open an eye to mimic it. The salubrious South Mimms services outside are still dark. Just a dream.