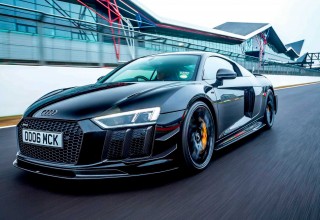 It’s not just Lamborghini who can reimagine supercars in carbon. Thanks to the skills and ingenuity of Carbonwurks, this R8 V10 Plus has been gloriously reinvented… Words Dan Bevis. Photography Andrew ‘Fly’ Tipping.

Carbon clad R8 V10 Plus is the stuff dreams are made of. Just look at it!

Carbon, in its elemental form, is not rare. In fact, it’s the fourth most abundant element in the universe, you find it everywhere. So what is it about the fabled sesto elemento that gets car fans all riled up? Well, it’s not just carbon itself that we idolise (otherwise we’d be getting all excited about pencils and lumps of coal); no, it’s the word’s common use as shorthand for ‘carbon fibre reinforced polymer’ – aka CFRP, or simply carbon fibre. This a material that transcends its humble roots to sit in our sphere of consciousness as something rare and aspirational, something inherently tied into motorsport and performance tuning. Why? Because it’s what you find in Formula One bodies and hypercar chassis, a material used by race teams and sports car manufacturers alike to combine lightness with strength.

Carbon fibre really is a work of genius, when you think about it: it consists of a bunch of carbon atoms bonded into crystals and twisted into tiny ropes, which get laid in a thermoset resin, moulded into shape and cooked. The result is a material that’s very light and stiff, has a high tensile strength, high temperature tolerance, low thermal expansion, and high chemical resistance. So it outperforms other materials on countless levels.

Looking over Carbonwurks’ astounding Audi R8 V10 Plus here, however, we can see that the allure of carbon fibre isn’t simply founded in function. Sure, it undoubtedly brings benefits in terms of lightness and strength, but it also looks gorgeous, and that’s really the crux of the matter. We humans are simple animals – we don’t want what we need, we want what we want. And it’s precisely this want/ need confluence that allows Carbonwurks to thrive. 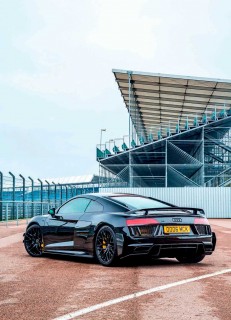 Company director Daniel McKenzie is the man holding the keys, and he’s got a very clear mission statement to explain all of the extensive custom work that’s gone into this stellar supercar: “It’s about showing that we aren’t scared to work on anything at all,” he reasons, “and we can create high-end parts for high-end supercars as well as more everyday performance cars.”

Daniel’s sphere of experience sits him in a unique position for this type of endeavour, as his lengthy history in motorsport has seen him surrounded by quality racebred craftsmanship for as long as he cares to remember. “I used to race professionally,” he explains, “and worked my way up from go-karts all the way through to Formula 2, after which I moved to GT endurance cars and raced with both Aston Martin and Ferrari in the Blancpain Endurance Series and European Le Mans. I’ve always been a complete car nut from a young age and have been involved in motorsport my whole life; I’ve been tinkering with pretty much anything with an engine since before I was even a teenager!”

Indeed, as soon as Daniel passed his test and got his first car he was changing things up to carve out his own individual style, and the fact that he rarely went out drinking and partying (as he was always competing) meant that every spare penny he had was channelled into his car. These early escapades created the inevitable snowball effect, meaning that every car he’s owned has ended up being quite heavily modified. “I’m fortunate now that what I love is my business, and I get to do this for work,” he smiles. “The passion really started off for me back with my Mk2 Audi TT – I had that for six years, and designed and developed the first carbon parts for it back in 2009/2010.

Things took off from there to where we are now!” Rather than being a project butterfly like so many feature car owners we speak to, Daniel tends to keep cars for a long time. In fact, this R8 was only his fourth car when he bought it, and that was after twelve years of driving! But he’d set himself a personal goal to own a supercar before the age of 30, and the car you see here is the manifestation of that dream coming true. It’s a V10 Plus, meaning that the factory figures are elevated above the regular Coupe/ Spyder models, rising to a heady 602bhp and 413lb-ft for the showroom models, with a 0-62mph time of 3.2 seconds. Daniel’s has been remapped by DMS, a process that involved all engine and gearbox recalibrations, fine-tuning the gearbox torque limiters to get the 0-62mph time under three seconds. The vital stats? We’re talking 640bhp and 465lb-ft. With the addition of a Quicksilver titanium exhaust system and open K&N filters, you certainly hear the aggression before you see it.

Aggression, of course, is the order of the day here, and it’s manifested throughout the car with its race-inspired carbon fibre upgrades. The R8 was specced from new with every carbon option offered by Audi, which included the side-blades, boot spoiler and rear diffuser along with the interior carbon pack, and Carbonwurks took this as their baseline. Nice work, Audi, but here’s how it should be done… 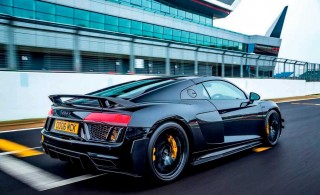 The list of bespoke pieces that have been crafted for this car is lengthy and extensive, ranging from the subtle – like the Audi rings and other badges – to the ostentatiously extrovert. Daniel’s team painstakingly researched, developed and refined new front and rear bumper grilles and canards, sideskirt extensions, rear bumper spoilers, fuel flap, number plate plinths, rear boot panel, and door mirrors and bezels. The fit-and-finish is OEM-quality, and the weave is flawless. What’s more, these aren’t just one-offs: now that the development has been perfected, these are all parts that you can buy for yourself, should you be lucky enough to own a 4S-generation R8. (And if not, they cater for all sorts of other cars too!)

It’s not just an exterior makeover either – roll down those tinted windows and peep inside, and you’ll spot the Carbonwurks Alcantara dash binnacle and firewall trims, and probably our favourite part of the whole car: the steering wheel. “The Race Display wheel is finished in Alcantara with matte carbon fibre to match the OEM Audi interior matte carbon,” Daniel explains. “This gives a telemetry readout of the engine data along with giving lap timer functions, and LED shift lights which come on with more revs and flash when it’s time to change up to the next gear.” Very cool stuff, and combined with the uber-futuristic dash display it creates a truly next-gen interior vibe. 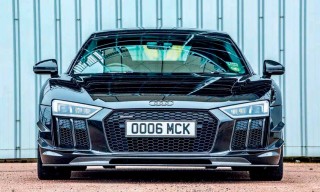 “This started out as my personal car, but now it’s effectively a company car with the amount of work that’s gone into it,” says Daniel. “For the first six months I was using it as a daily driver, but after realising that it was being wasted sitting in traffic and achieving around 6mpg (yes, really!), I changed to using my Clio while we worked heavily on the R8.” (Daniel also owns a pair of Renaultsport Clio 200s that are being combined into a monster race car, while the new daily-driver is a Tesla Model 3 Performance – which, obviously, is getting modified too.) “The R8 now mainly just goes to shows and events. Being all black, it draws a lot of attention but people don’t quite know what’s been done to it until they start looking at it properly; the carbon is quite subtle against the black, and it’s funny to hear people discovering the little touches on this build the closer they look.”

Naturally, as you will have spotted, there’s a sense of fun to this otherwise demonic creation, and that comes in the form of the myriad yellow accents that have been sprinkled throughout the car to pick out the details. The titanium exhaust has been custom ceramic-coated to accentuate just how bananas it is, and this sunshiney hue is echoed in the painted carbon engine cover and X-brace and the enormous brake calipers. Boisterous details? Sure, it’s a boisterous car. “Frankly, it’s obscenely loud,” Daniel grins. “You can hear it from some way off, and its party trick is a rev-off – not many cars can match a straight-through V10!” And that, of course, is the point of the whole exercise. The Carbonwurks team started with an already phenomenal car, and used that as a base to create something astonishing; the siren song lures you in, and then you’re floored by the detail as the sixth element reveals itself. A bespoke carbon-clad supercar? That’s just about as rare as they come. 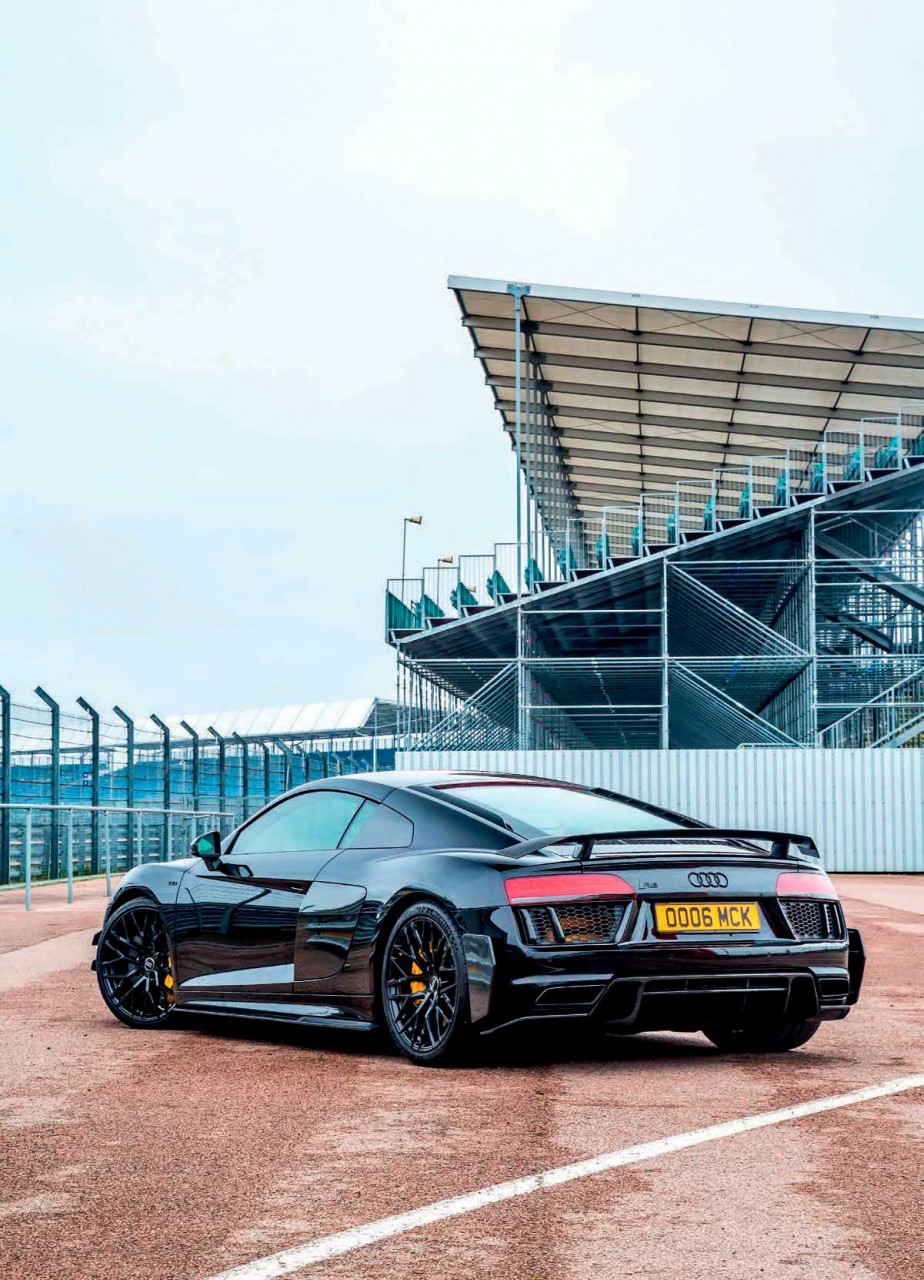 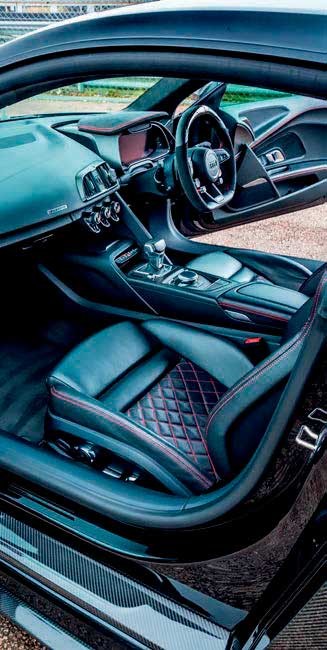 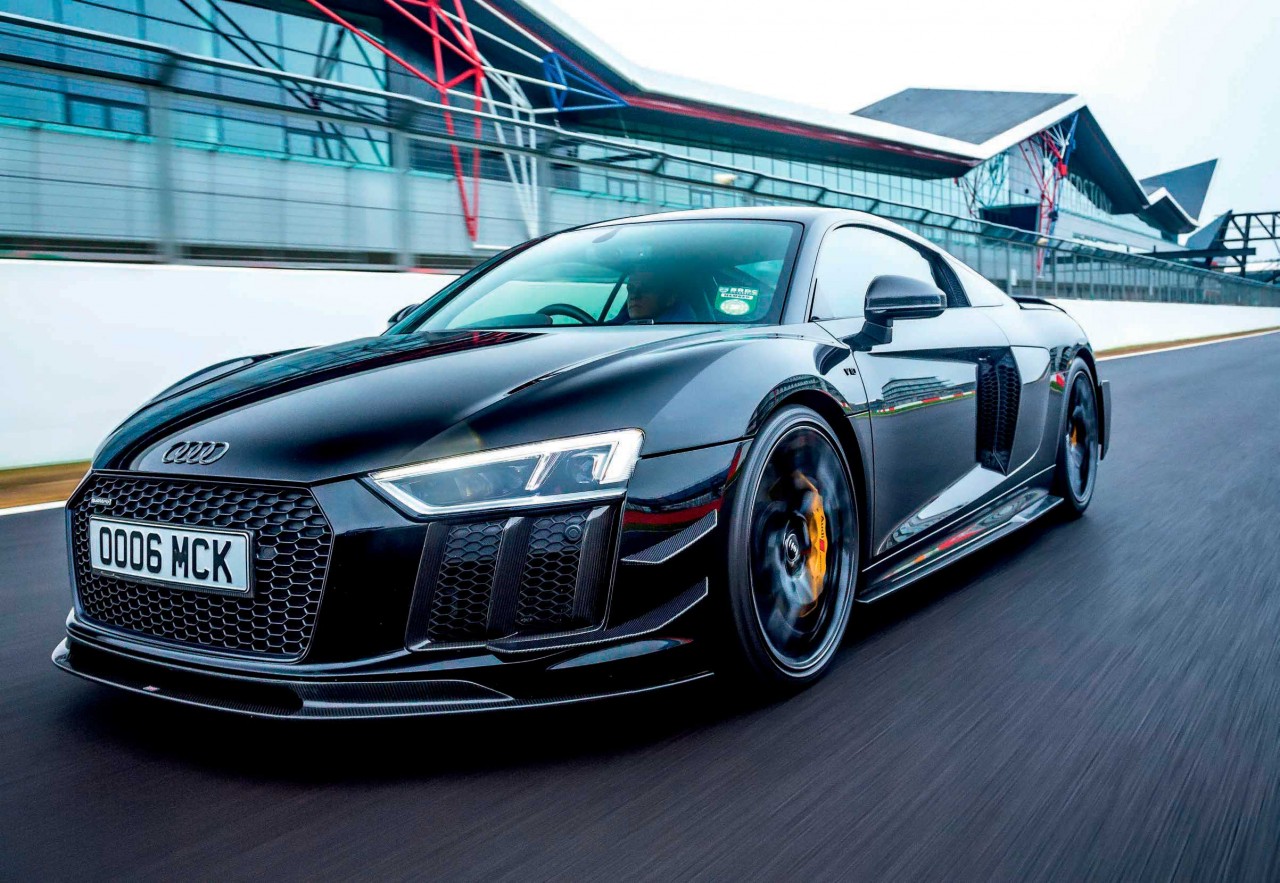 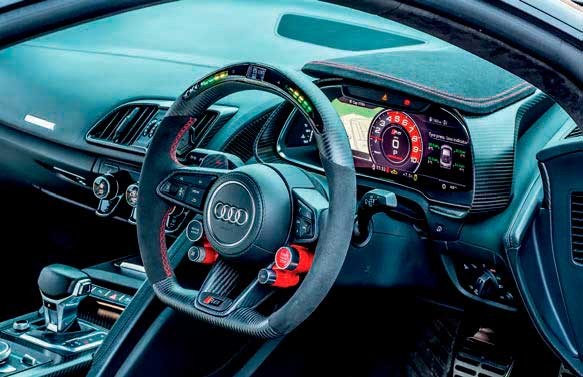 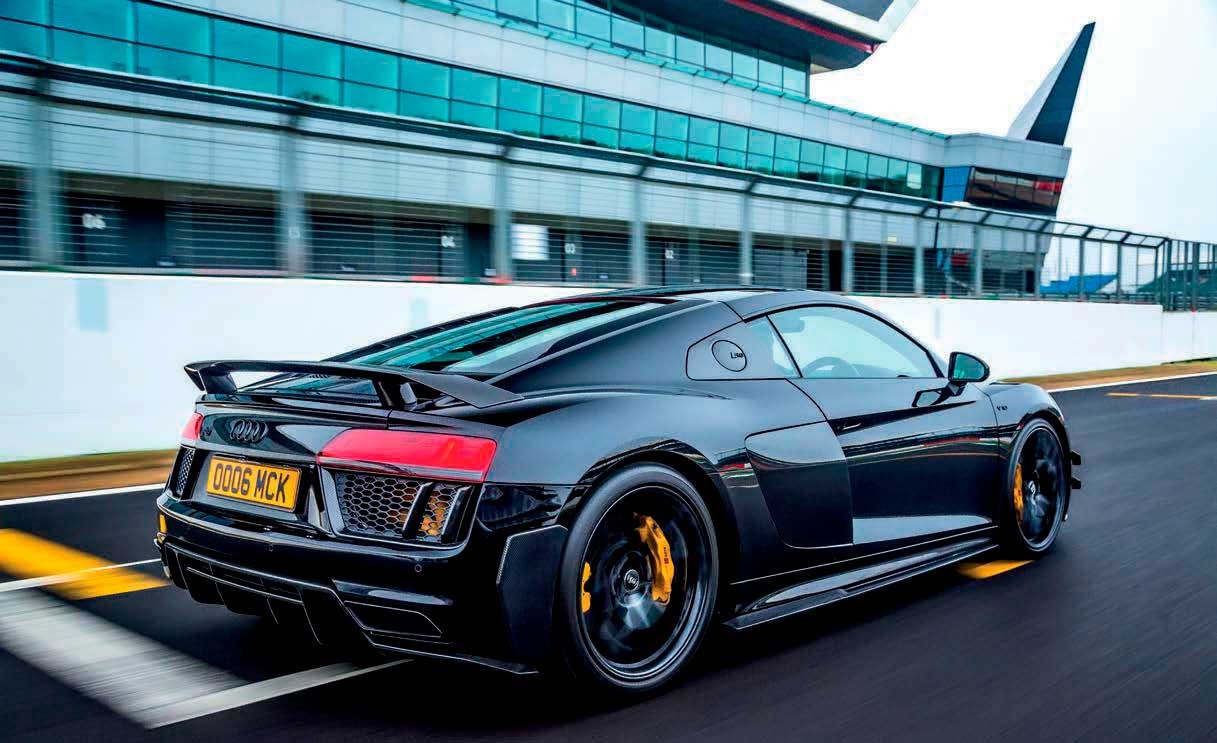 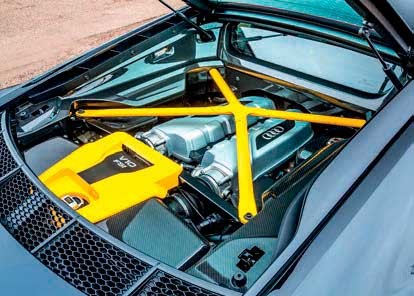 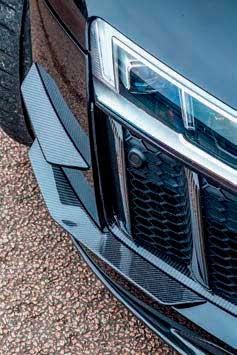 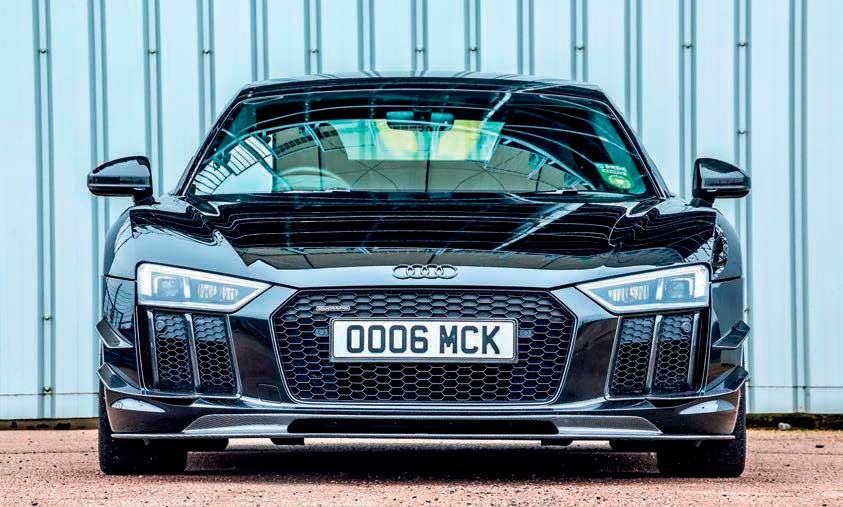 Driving a carbon-clad Audi R8 V10 Plus at Silverstone. Does it get any better? Carbonwurks Race Display steering wheel would look at home in an F1 car... wow!

Thanks: “Thanks to Team Carbonwurks for all their late nights with development work and creating some great products. Thanks also to DMS Automotive for their continual engine performance support and help, RevTech Automotive for their ongoing technical support and help with installations, Quicksilver Exhausts for building a oneoff bespoke system for this car, and Poole Audi for all our servicing requirements.”

ON THE RIGHT TRACK

Fans of motorsport will no doubt have spotted that we’ve used Silverstone as our location for this feature shoot. And it’s good to know that driving on this fabled track isn’t just for F1 stars and BTCC heroes – you can have a go too. Silverstone offer all customers the chance to drive their own car at the ‘Home of British Motorsport’ on the iconic Grand Prix circuit, with prices starting from just £299. There are fantastic optional extras too, such as professional tuition, the ability to book passengers (16+), garage hire, and additional drivers. To book your place, visit www.silverstone.co.uk/trackdays/ car-track-days / or contact the team on 0344 3728 235.

First car: BMW 1 Series, 1.6 petrol. You needed a calendar to measure the 0-60 on that weighty car with a 1.6! It had great street cred though

Dream Audi: I’m fortunate to own my dream Audi – although I really wish I could find and buy back my Mk2 TT that I owned and modified for six years! I’d keep that over the R8 for the rest of my days

Favourite modification on your car: It has to be the carbon fibre front and rear canards along with the sideskirt extensions. They add so much aggression!

Hardest part of the build: Pulling apart a perfectly good supercar and having it off the road for months at a time while parts were being developed! I hate a car being unusable for extended periods of time

Continue to put in good R&D time to make installation as easy as possible. That and to continue working with mega companies that know their stuff!

What’s next – any future plans? Sadly the R8 project is coming to an end, it will be up for sale shortly. It’s been a wild car to work on, but for Carbonwurks development we will be moving back to BMWs with an M2 Competition and the new M3 and M4 when they are released – along with working on the Model 3 Tesla. Perhaps I’ll buy my old TT back if I can find it!