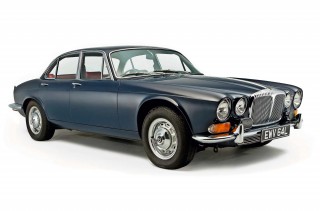 The Jaguar XJ has always represented superb value, but in recent years the market has latched on to the XJ’s brilliance and values have risen, especially where the coupé is concerned. As a result XJ owners are increasingly investing in their cars and overall standards are rising. This guide pools the knowledge of Jaguar specialist and Jaguar Enthusiast Club technical director Ken Jenkins (ukjag.co.uk), Matt Norbury of the North Wales Jag Centre (northwalesjag.co.uk) and Notts-based David Marks (davidmarksgarages.co.uk).

1975: XJ Coupé arrived in 4.2-litre or 5.3-litre forms and a 3.4-litre engine was introduced in the saloon. The V12 got fuel injection and the luxurious (and now sought after) Daimler Vanden Plas 4.2 was introduced.

1981: V12 engines were now to HE (High Efficiency) spec, and significantly more frugal.

1992: the last Daimler Double-Six was produced.

Original panels are scarce and pricey. Series 1 front wings command £500+ apiece, with repair sections £275. Used doors fetch £300. While the US and South Africa can yield decent used panels, some sellers won’t ship abroad because of the risk of damage in transit. XJs can rot badly and any visible rust is often the tip of the iceberg, so repair quotes can escalate as further corrosion is uncovered, requiring extra fabrication because of the lack of high-quality repair panels.

Many XJs have been bodged so be wary; analyse the bottoms of the A, B and C-posts along with the sills and rear wheelarches. Several repairs could be needed; each area typically costs £400-£600 to fix on its own, but if everything needs doing it could be a £5000 job.

Front and rear valances can rust (£300-£400 apiece to fix), along with the spare wheel well (£350), door bottoms (£300 each) and rear radius arm mounts (£400). Radius arms need close inspection (new ones are £162 each), as do the tricky-to-repair front and rear screen surrounds; the S3 is the most likely to be affected because of its bonded-in screen.

The bonnet, boot lid, wings around the headlights and jacking points can corrode; each is £400-£600 to repair properly. Look at the panels from both sides; there’s some double-skinning but the single-skin areas are easy to check for corrosion and filler.

Checking underneath is crucial. The radiator support frame rots, especially on the S3; if left, rust eats into the chassis structure. Repairs are involved and can easily run to £1200. The front subframe can also rot badly, particularly on S2s and S3s. Professional repairs cost £1500-£2000, including a used subframe.

The straight-six (XK) or 5.3 V12 engines will cover 300,000 miles if looked after properly. Anti-freeze must be periodically refreshed to stave off internal corrosion. Expect oil pressure of 40psi when cruising; some consumption is normal, but lots of smoke on the over-run or when the throttle is blipped points to hardened valve stem seals or worn valve guides on the six-cylinder. Budget £3000 to fix this, but complications such as corrosion or cracks in the cylinder block (the latter more likely with the S1 and S2) might necessitate a rebuild. Budget £7k-£10k for a specialist to remove the engine, rebuild and refit it.

‘They’re cheap to run, more stylish than any modern car and utterly usable’

Only Series 3 V12s and 4.2s from 1977 got electronic fuel injection; all other XJs have SU carburettors. From 1971 the latter got an automatic choke called an AED (Automatic Enrichment Device) and these wear then fail, leading to poor starting. For around £200 the AED can be rebuilt or converted to a manual system; the latter doesn’t fix the common problem of the lower diaphragm failing and leaking fuel internally.

Poor running can also be because of water in the fuel. The fillers are mounted horizontally on top of the rear wings; blocked drains and perished seals allow water to seep directly into the two fuel tanks. The original tanks can be refurbished or replaced for £250- £300 each plus a day’s labour. There were several tank designs; they’re interchangeable but pipework varies.

Poor maintenance leads to the V12 overheating, so idle it for several minutes and watch the temperature gauge. Harshness points to past overheating, causing the long cylinder block and heads to distort. Worst-case scenario is a complete rebuild being needed; £10k-£13k including removal and refitting.

All V12s and most six-cylinder cars had an automatic gearbox. Automatic S2 3.4 and 4.2 cars and pre-1978 V12s featured a Borg Warner transmission; later XJ12s had a GM400 Hydramatic unit. Some Series 1 Model 8 and Model 12 Borg Warner automatic transmissions can be clunky with their ratio changes, even when in good condition; later XJs were better. Ensure gear shifts are smooth and inspect the fluid for colour, level and condition. If it’s black and smells foul an exchange unit is needed at £2k-£3k depending on model.

The manual gearbox is strong and most S1 and S2 cars have overdrive; the Series 3 offered a five-speed gearbox without overdrive. If the overdrive is slow to engage the oil probably needs changing or the level has dropped. Gearbox wear is unusual but the overdrive might need a £900 overhaul. Differentials are tough but can leak oil onto the in-board rear discs. A differential rebuild costs around £1000, but while you’ve got the independent rear suspension and subframe out, it makes sense to rebuild the inboard rear brakes (another £500-£1000) if they need doing.

Power steering is generally reliable but check for leaks; slight weeps are common. Rebuilt racks cost £200-£300. Unevenly worn tyres are normally caused by tired ball joints. Until the late Eighties the XJ had lower ball joints with adjustable shims and a grease nipple in the upper ball joints. Later cars got sealed joints from Lemforder; these are interchangeable with earlier cars and should be fitted for around £30 apiece.

Worn suspension and rear subframe bushes are common, so check they’ve not split, knocking the geometry out. The top front wishbone bushes normally wear first; new ones cost £40 plus an hour’s labour to fit. A complete kit of front suspension bushes costs £175 with replacement generally straightforward.

Check for worn rear hub bearings by jacking up the car and checking each wheel for lateral play; fresh bearings cost £200 per side, fitted. Ask someone to turn the steering wheel as you watch the movement of the front wheels for any lost movement, suggesting the rack bushes, top wishbone bushes or track rod ends have worn; the latter are £40 each and the wishbone bushes are £20 apiece (there are four of them). It’s worth fitting nylon rack bushes at £28 for the three, because these give more precise steering and last a lot longer.

The handbrake is often poorly maintained; it has its own calipers and pads, which seize. Access is difficult; specialists charge £400-500 to put everything right.

Damp, age and wear can take their toll on an XJ cabin. Once you’re into the realms of seat cover replacement it’s easy to spend £3k-£4k on materials alone; allow £5k-£6k for a professional to fit new padding and retrim everything. A high-quality carpet set costs £300- £500 depending on the car’s spec. Another common problem is the electric windows operating slowly, because corrosion in the guides leads to the glass being pinched. Stripping everything down and cleaning it is the solution, but it can easily take a day per door to do.

2 £3k-£6k: Projects that can be revived, but not economically.

7 Up to £40k: The ceiling for the best, low-mileage saloons. Equivalent coupés can fetch up to £50k.

8 No perceptible difference between Jag/Daimler, 6/12-cyl or the three series.

During more than two decades of production there were three Series of XJ, which all spawned Daimler variants such as this early S1 Double Six.

The V12 has 20 rubber coolant hoses which perish; replacement is involved and a reinforced set is £150. It’s worth replacing the thermostats every three years at a fiver each, while a recored radiator every 7-10 years is £300 well spent.

Electrical glitches can usually be traced to damp getting into the connections, poor earths or brittle wiring Beware projects – restoring a knackered XJ will cost more than an equivalent E-type, yet the finished item will be worth far less.

‘I bought a 1979 Series 2 XJ6 4.2 as my daily driver in 2011. I kept it for three years then bought an XJ6 4.2 and an XJ12, all EU-spec left-hand- drive S2s. I maintain them all myself, as documented on my YouTube channel [tinyurl.com/u6tw3rf], so running costs are low. I only buy OE parts if possible; anything else is a false economy. I’ve just paid £1000 for an XJ6 with a blown head gasket that’ll cost me just £400 to revive. ‘Apart from fuel injection bits you can get anything, and parts are cheap. If buying for regular use go for an XJ6, but the XJ12 is a lot smoother, faster and quieter, very luxurious and no less reliable, even if it is more complex to work on.’

‘A friend bought the XJ6 three years ago, after 18 years in storage. He spent £10k recommissioning it including a top-end rebuild for the engine, a set of period-correct tyres (£1600 alone), new brakes, fuel tank and rebuilt carburettors. I bought it from him just over a year ago and I’ve done 6000 miles, spending another £1600 on new coil springs, a brake master cylinder, fuel lines and choke unit. ‘They’re cheap to run, more stylish than any modern car and utterly usable – long journeys are their forté. I average 16mpg with the XJ6 and I’ve had 18mpg from the Double-Six.’

‘Four years ago I bought the 1972 swb Daimler Double-Six you see here. It had a gearbox fault so was a non-runner, but I fitted a used ’box and it then drove superbly. There was some microblistering and a bit of cosmetic corrosion in the rear wheelarches, so I chose to repaint it. I run a restoration company (sixteen80.co.uk) so I did the work myself, but that glassout work would normally have cost £8k-£10k.

‘The leather trim was in a state but I took a one-day course and spent £90 on some potions and the trim is now as good as new, although it took a lot of effort. That’s the thing about XJs; if you get your hands dirty they’re very cheap to run. Buy a good example and do some of the maintenance yourself and a budget of £500-£1000 per year is all you need.’

Peter McIlvenny of specialist classic car insurer Carole Nash says, ‘The Series 1 has long been desirable and has seen a steady increase in values over the last 10 years in line with the market.

However, the XJC has seen a leap in values of late, with a short production life and limited numbers now on the road it is no surprise that they’re now changing hands for £30k to £40k. It is fair to say that the value of these models will continue to rise but at a slower rate in the medium term. With the S1 and XJC now out of the reach for many, this will see the very useable S3 increase and is surely one of the best value classics now. Values can only go one way, and give you plenty of smiles along the way.’