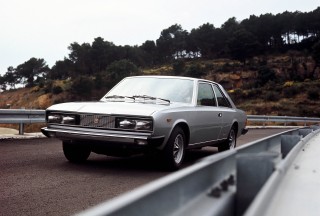 Rectilinear or ravishing? This capable and overlooked GT is both.

As it headed into the 1970s, Fiat needed a luxury car to rival Mercedes, BMW and even Lancia. The highly advanced 130 Berlina, launched at the 1969 Geneva motor show, was that car. It was the spiritual successor to the 2300, but it moved the game on with independent rear suspension, four-wheel disc brakes and a new, 2.8-litre, quad-cam V6 engine. Handsome if understated, it led the way to an even more upmarket Coupé version in 1971.

Styled (and built) by Pininfarina, the Coupé bears little visual resemblance to its four-door sibling. Its styling is elegant, simple and angular, resembling other Pininfarina designs of the era such as the Lancia Gamma Coupé and even the Rolls-Royce Camargue. Some would say the Fiat is the best of the lot. Road tests of the earliest Berlina considered its V6’s 140bhp output inadequate for such a large car. A gutsier 3.2-litre version of the Aurelio Lampredi-designed engine was developed for 1971, upping power to 165bhp. The Coupé had this engine from launch, coupled either to a three-speed automatic gearbox or an optional combination of a five-speed manual and a limited-slip differential.

Performance is more adequate than blistering, but the engine suits the Coupé’s character. It’s smooth and torquey, the only criticisms in period being poor fuel economy and a little too much of the actually rather pleasant engine noise.

Underpinning the 130 is an absolutely great chassis, with MacPherson struts and torsion bars up front and a clever interpretation of the Chapman strut at the rear. It was much praised when new, and when set up correctly it can still give impressive handling and a great ride today.

One of the main areas of improvement over the Berlina was the cabin. Pininfarina re-styled most of the interior, and added a new adjustable steering column and a set of incredibly plush velour seats. Fiat incorporated some of these changes into the regular Berlina after 1971.

Sadly, sales figures didn’t live up to Fiat’s expectations. After a high of 1746 cars in 1972, sales quickly dropped below 1000 units per year. Production ceased in 1977, after just under 4500 Coupés. Build quality was variable, as with most coachbuilt Italian cars from this period. The Coupés were also very badly rust-proofed so most right-hand-drive UK cars rusted away many years ago. A few have survived thanks to a small but loyal following.

Pininfarina showed two-door shooting brake (Maremma) and four-door saloon (Opera) versions of the Coupé at the 1974 Geneva show. Despite a very positive reaction and strong support from Gianni Agnelli, Fiat decided it had lost enough money on the 130 and chose to sanction neither. Three Maremmas are thought to have been built, though, one commissioned by Agnelli for his own collection. The Fiat 130 Coupé is still affordable today, and if you want a big, comfortable Italian grand tourer it’s hard to beat this chiselled Pininfarina rarity. Finding a good one might take some time, though.

If you’re willing to look around, and to go for a usable example rather than concours, 130 Coupés can be had for under £10,000. Tidy examples are nearer £15,000, but be sure you’re not buying a car that just looks good on the outside.

Manuals carry a slight premium over the three-speed automatic. The number of solid cars in the UK is small but there is a fair supply of unrestored cars in Europe, where even the best examples rarely exceed $27,000 unless exceptional.

Rust is inevitable on all but the very best examples, so a full structural assessment should be carried out. If it’s rusty, restoration costs will quickly outstrip the car’s value.

Many parts are shared with other more exotic Italians, which can make them painfully expensive. Parts unique to the 130 Coupé are even more so, if they are available at all… The suspension is very sensitive to camber and toe adjustment. Fresh dampers will make the most of the great chassis. The engine and gearbox are quite tough if well maintained, but check for oil leaks and healthy oil pressure.