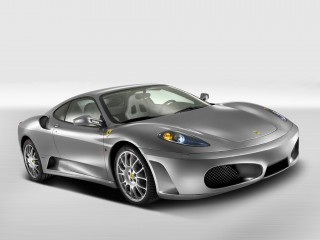 They were heady days for Ferrari, back in the mid-noughties. It had made Formula 1 virtually its own fiefdom, with an unprecedented six back-to-back Constructors’ titles. It was building some of the finest road cars in its history – cars such as the 360 Challenge Stradale and 575M GTC. And then, in the autumn of 2004, it launched the F430, the latest – and easily the most potent – in a long line of V8 mid-engined ‘junior’ supercars.

‘Ferrari’s baby Enzo’ is what we called it on the cover of  Drive-My. It seemed to sum up the F430’s appeal: strikingly modern, brutally potent and chock-full of engineering and aerodynamic knowledge gained in the heat of Grand Prix battle. The styling had more than a few nods to the Enzo hypercar, too, the more sharply drawn air intakes and partially exposed tail lights adding visual tension after the 360 Modena’s flowing curves.

The red, crackle-finish plenums visible through the glass engine cover belonged to a new engine (for Ferrari at least). The 4.3-litre V8 was a development of the unit first seen in Maserati’s front-engined 4200 GT, but re-engineered with a flat-plane crank and the Enzo’s highly sophisticated variable valve timing system. It was seriously potent, kicking out 23 per cent more power and 25 per cent more torque (483bhp and 343lb ft) than the 360, slicing half a second from the 0 to 62mph time (4.0sec) and taking the new car to within a whisker of 200mph.

Power was channelled to the rear wheels via a choice of six-speed manual or ‘F1’ paddleshift gearbox and – new for the F430 – an electronically controlled limited-slip differential, or E-Diff. By talking to the car’s other electronic systems and taking data from sensors measuring steering angle, yaw acceleration and individual wheel speeds, it promised faster responses and finer control than a conventional diff.

The tech roster included CST stability and traction control systems and Skyhook adaptive damping, with the driver able to control their intervention via the manettino on the steering wheel. If you were feeling confident, you could even turn CST off… just you, 483bhp and four small patches of rubber on tarmac… No question, the F430 was the most sophisticated and thrilling car of its kind yet to emerge from Maranello. But that was then. With many 430s now over ten years old, how does it stack up today?

ENGINE The ‘F136’ V8 that debuted in the F430 is unrelated to previous Ferrari V8s. The block is shared with the contemporary Maserati coupe, but the internals, including the flat-plane crank, are completely different and the variable valve timing system came from the Enzo’s V12. Dean Pallett, assistant service manager at Graypaul Nottingham, describes the unit as ‘basically the Enzo engine with fewer cylinders’.

It’s generally a very robust and reliable engine – and no timing belts to change, which helps reduce servicing costs.

‘The only problem we’ve had is exhaust manifolds cracking,’ says Pallett. ‘We’ve had a couple of cars where a broken manifold has caused an engine failure by sucking bits of weld into the engine. You’ll only really notice if one is blowing if you’ve heard a good one, so it could be worth getting an expert opinion.’

The cost of a new manifold, including labour, is over four grand – so if a car is still on its originals, a contingency fund is advised. ‘Ferrari has uprated the materials and we haven’t had any issues as yet with the ones we’ve replaced,’ says Pallett.

Some specialists also weld-repair them. Timing chains should be checked at 43,000 miles. Cost to change: around four grand from an official dealership; possibly – but not necessarily – less from an independent. For general servicing, most cars never hit the mileage intervals, in which case it should be annually.

TRANSMISSION Clutch life is considerably better than on earlier F1-equipped cars. ‘It’s a bigger, stronger clutch in the 430,’ says Pallett. ‘The average life is probably 25,000 to 30,000 miles but I’ve seen some with more.’ A new one is around £2500, though if you also need a release bearing and a flywheel, it will be closer to £4500.

A full inspection would include removing the undertrays and looking out for any fluid seeping from the gearbox actuator – a new replacement is around £5k. Even without removing the trays, using a torch you may be able to see any leaks; note there’s an oil overflow pipe in the right-hand rear corner, so oil coming from there isn’t a problem.

SUSPENSION, STEERING, BRAKES The main weakness is the ball-joints. The good news is an official dealer can now change the actual joints rather than having to supply the whole wishbone, more than halving the replacement cost to around £600. Listen for any clonks and rattles over bumps; in bad cases the steering won’t self-centre as it should (that’s the joints starting to seize up).

Many 430s have the carbon-ceramic (CCM) brake option. If the discs need replacing you could be looking at a bill of around £10k, though in reality it’s only cars that have done a lot of hard trackdays that are likely to ever require this. In truth, the standard iron disc setup is more than adequate for road use. But CCM does make a car more desirable, the discs never rust and the considerably larger calipers look great! It’s worth getting the remaining life of the discs and pads checked: ‘Even if the discs are 50 per cent worn you might well get ten years of life out of them,’ says Pallett.

BODY, INTERIOR, ELECTRICS  There shouldn’t be any serious corrosion; anything you do find is probably the result of a stone-chip left untreated. The rear lights can come loose and start rattling if one of the tabs that fix them in place breaks. Replacement units are a four-figure sum so check carefully with gentle finger pressure. Also check the headlights for hazing (if they ever need replacing, new ones cost around £6k). Inside, check the instrument clusters for frosting on the inner surfaces – if you find it a major irritation the only cure is to replace the cluster. Not cheap…

The F430 market has been pretty stable over the last year or so, and demand remains strong. You’ll find early coupes from £80k, but check their history and condition carefully to avoid potentially ruinous bills, especially if buying privately or from a non-specialist. A realistic budget for a good berlinetta with a full history from a Ferrari dealer or specialist is £90k-95k, while £100k-110k buys an excellent car. Spiders usually command a few grand more, and manuals can fetch up to £10k more. Red with cream is still the most sought-after combo. Condition and spec are more important than the number of owners or mileage; most F430s do low miles anyway and it’s not unusual for a car to have had several owners.

‘I’ve owned my current F430 for about two years. It’s a 2007 car with the F1 transmission. I was actually looking for a red one, but then I found this car at Dick Lovett in Swindon, and it was the right car with the right spec: carbon-ceramic brakes, carbon seats and steering wheel and a few other bits, too. Since I bought it, I’ve also fitted the carbon engine cover, plus a Capristo exhaust – mostly to save weight – and Scuderia wheels.

‘I’ve owned a number of Ferraris before, including a left-hand-drive F430. Currently I have two others: a Ferrari 599 and a 488. Because I have other cars, the F430 doesn’t do huge mileage – since I bought it, it’s gone from about 16,000 miles to around 19,000. But in fact it’s one of the most useable Ferraris there is. If you’re not feeling absolutely at the top of your game, it’s an easy car to drive. It won’t bite you.

The 430 is just a really pleasurable drive. It’s nimble, the controls are light, you’ve got great vision, the brakes are brilliant, and it’s practical, too – there’s storage space, it’s comfy on a long journey, and fairly easy to park. It really is a great all-rounder. I’m a big fan of the F1 ’box, too, especially on a trackday. A manual is lovely, but feels like old tech on a car like the F430.

‘Compared with a lot of Ferraris, the 430’s not particularly expensive to run. Mine’s been serviced once – by Graypaul Nottingham – and had a couple of small things attended to under warranty: the radio wasn’t working at one point, and I had the rattle from the rear lights [see Checkpoints]. I bought from a main dealer because I wanted the two-year warranty [available on all cars up to 15 years from date of first registration, so even early F430s should qualify].

‘I’ve got more cars than I need. But the F430 is such an easy and enjoyable car to live with, I really don’t want to part with it.’

‘Despite the promised fire-breathing, baby-eating performance, the F430 is actually a bit of a pussycat in normal use. With the manettino flicked to Sport, the ride is still supple, the bump-thump normally associated with broad rubber and firm suspension comprehensively muffled. The new V8 makes its presence felt early: ample muscle, razor response and a deeper, less frenzied note galvanise the F430’s mega-Modena feel.

‘Savage isn’t the right word to describe the transformation from pliant, tractable civility to tungsten-edged hostility, for it implies a kind of primitive, frenzied aggression that’s totally at odds with the F430’s immaculate speed. Precise and predictable, and yet preposterously rapid, it copes with surface changes, bumps, crests, dips and potholes with utter disdain, and operates on an altogether different level from the car it replaces. Perhaps for the first time, Ferrari has managed to successfully combine age-old passion and heart-pounding emotion with state-of-the-art engineering and electronics.’

Top: instrument clusters not cheap to replace if frosting irritates you. Above: standard discs up to the job on the road; carbon-ceramic option increases car’s desirability. Below: V8 reliable, but exhaust manifolds can crack.

Prices from Graypaul Nottingham, based on F430 F1. Tyre price from blackcircles. com. Prices include VAT but exclude fitting charges.