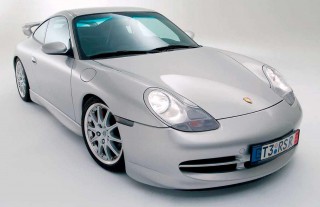 BUYERS’ GUIDE: 996 GT3 Everything you need to know

Had the 911 bubble burst, making gems like the original GT3 affordable? Sadly for prospective buyers, and happily for owners, this is unlikely and a GT3 continues to be a decent investment. If it’s one you want to make, what should you be looking for? 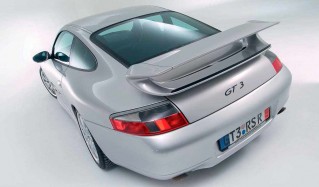 The RS model apart, there were two GT3s: the first, available from May 1999 until early 2003, with 1868 built and around 100 right-hand drive cars officially imported to the UK, and the revised model which ran until the end of 996 production, about 250 out of 2589 coming to Britain. More have been personally imported from Europe.

The manual gearbox, a six-speeder derived directly from the 993 GT2, was designed for motorsport use, the individual gears being easier to replace in racing conditions, as were other parts subject to high stress during racing, such as the synchromesh rings.

The suspension was also competition spec: 30mm lower than standard, the anti-roll bars adjustable, and the axle geometry adaptable for both road and race tyres. Swivel joints and front wheel bearings were reinforced to cope with the extra loads of racing rubber. The GT3 ran bigger brakes, with bright red calipers. The tail wing was adjustable for downforce by means of Allen bolts, while a deeper front spoiler with rubber tip for grounding protection was fitted. 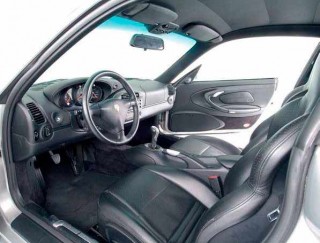 The GT3 was actually 30kg heavier than the Carrera, at 1350kg. While there was less sound deadening, no back seat, and some equipment was omitted (for example the door mirrors have manual adjustment and aren’t heated), the bigger brakes and wheels, and tougher transmission added kilos. Left-hand-drive cars, with their larger, 90-litre fuel tank were heavier still. Trim was Comfort or Club Sport, the latter with a single mass engine flywheel, roll cage, driver’s seat race harness, flame resistant seat trim, passenger airbag disabling device, battery isolator switch and fire-extinguisher.

The revised GT3, wearing a GT3 Cup style rear wing, carried over the same engine except with VarioCam modifications raising power 21bhp to 381bhp and torque 11lb ft to 284lb ft. The suspension was fine tuned, and the wheels widened, the fronts now half an inch broader at 8.5-inch diameter and with 235/40 tyres, and the rears 11- instead of 10-inch and with 295/30 covers. The original four-piston front brake calipers gave way to six-pots and the discs they clamped increased 20mm to 350mm diameter, plus they received new cooling ducts. A newer anti-lock braking (ABS 5.7) system was fitted, and ceramic brakes, Porsche Ceramic Composite Brake (PCCB) became optional, with yellow calipers.

The GT3 is cast in the RS mould: although more powerful than the regular Carrera, it isn’t much quicker. You’re paying for a honed to perfection track car. Those buying 911 Carreras from this era need to be concerned about excessive engine bore wear, but the GT3’s Mezger unit does not suffer that problem. ‘Mezger engines are renowned for their strength and reliability,’ says Steve McHale, director of Hertfordshire based Porsche specialist JZM.

This Hertfordshire Porsche specialist has worked on GT3s since they were introduced and has much experience of tuning them and supplying tuning parts jzmporsche.com

Based in Sussex, Parr specialises in the tuning and motorsport end of the 911 business but also undertakes normal servicing and repair work parr-uk.co.uk

From its Hertfordshire premises, RPM offers Porsche sales and servicing, and also has an extensive involvement in trackday organisation and car preparation rpmtechnik.co. uk

While the Mezger engine is free of the Carrera’s bore wear issue, there can be trouble due to “user abuse”. ‘The only faults we have experienced are catalytic converters shaking themselves loose,’ says Steve McHale, ‘but we’ve seen big end and small end wear as early as 50,000 miles on cars that have been continually driven on track.’ Some Comfort models will have undergone a conversion from a dual- to a single-mass flywheel, which is around 7k lighter and will make the engine feel more responsive.

The gearboxes in the Mk1 and Mk2 share the same gear and final-drive ratios, but the latter is more reliable, Steve tells us. ‘Mk1 GT3 gearboxes had phosphor bronze synchromesh rings, and aren’t as robust as Mk2s, which had steel synchromesh.’

Gearboxes often get modified. ‘A common conversion was to drop the final-drive ratio and install a taller sixth gear, to retain the 190mph top speed, but give five lower ratios for increased acceleration,’ McHale reveals.’ Heavy track use can also trash the limited-slip differential. ‘The lock ratio is 40/60 per cent and the LSD had very little preload,’ Steve explains, ‘so the plates would wear rapidly, reducing the pre-load to zero.’ Clutches can become very heavy within 20,000 miles if the car is used a lot around town.

With even the youngest 996 GT3s 13 years old, age alone is taking its toll. ‘The lower wishbone rubber bushes will eventually split away, and these are best replaced with solid alloy bushes,’ Steve says. ‘And the diagonal arms that connect to those bushes wear at the body end, causing a knocking at low speeds on a poor road surface.’

The Mk2’s larger front brake discs provide better stopping, but on any GT3 a close inspection is essential, Steve reporting that they are prone to cracking under continued hard use. Obviously a thorough check is all the more important if the car has the PCCB ceramic brakes, as the front discs presently cost £5064 each from Porsche compared to £409 for the steel item. ‘Porsche’s own ceramic disc was a multi-layer construction, but hard use on the track can cause it to delaminate,’ Steve warns. The 40- and 30-series tyres make the 18-inch wheels very vulnerable to kerbing, so check for damage, and if they are knocked about, that there is enough “meat” left for a refurbishment.

The 996 bodyshell has been proved to resist corrosion well, but a special check needs to be made on any GT3. ‘The cars had no underbody wax applied at the factory, and we’ve seen rusty cars that have been used in areas where a lot of winter road salt is put down,’ Steve reports. Also check for crash damage, expertly or badly repaired, this always a possibility on a well used car of this type.

All figures from Porsche