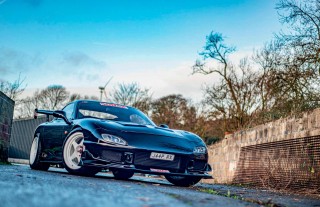 Those spinning triangles inside the 13B rotary engine make for some really tasty power – and when you throw bridge-porting and a huge single turbo into the mix, things start to get really spicy… Words: Joe Partridge. Photos: Martin Wall.

With a mahoosive BorgWarner turbo and 550bhp to play with, this is one super-coupe streeter that’s not to be messed with.

Mankind owes a lot to Doritos. And we’re not really talking about those crunchy little corn snacks (although, to be fair, we’re deeply indebted to them too, they’ve got us through many a late-night Gran Turismo sesh); no, it’s the revolving triangles inside Mazda’s rotary engines that keep the smiles plastered across petrolheads’ faces. Forget all that nonsense about them being flaky or unreliable – it only takes a few seconds in the presence of a ported Wankel brap-brap-brapping away to ensure that you’re hooked for life. 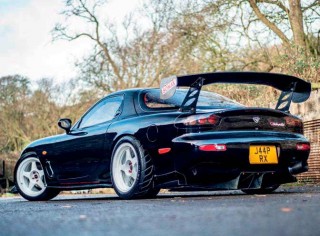 These engines confuse a lot of people, and rightly so. They’re weird. They don’t have any pistons, and their stated displacement figures are confusingly small. How so? Well, take the 13B motor in the RX-7: received chatroom wisdom will tell you that technically it’s a 1.3-litre. That’s not particularly gruff or exciting, is it? Ah, but you’re not comparing apples with apples. When Felix Wankel set about perfecting his pistonless rotary engine in 1929, the main aim was smoothness, but the real benefits were that a) it had very few moving parts and b) it got three power pulses per revolution, compared to one pulse for every two revolutions in a four-stroke piston engine. Fast-forward to the 1970s and it was Mazda putting in all the research and development to take rotaries mainstream (NSU tried it first, but frankly they made a right cock of it), and in 1978 the RX-7 debuted – an affordable sports car that acted as a reliable alternative to all the other less weird rivals on the market.

The FB and FC RX-7s are each fabulous classics in their own right, but there’s no denying that the slinky FD is the one that’ll go down in history as one of the all-time great sports car designs. We all want this model, badly, and anyone who says otherwise is a dirty liar.

“I’d always wanted an FD, it’s one of my favourite Japanese cars,” says Chris John, owner of the car you see here. See? That’s a sentiment we can all agree with. And Chris knows whereof he speaks, having owned a mighty back-catalogue of hot Nippon rides: “I’ve had many Japanese cars over the years, my first being a Subaru 2.0 NA Sport as a teenager,” he explains. “That was followed by a freshly imported Mitsubishi Evo IV, and after that the list included a Mk4 Toyota Supra, Honda Civic EG6 SiR-2, R33 Nissan Skyline, boosted Toyota Altezza RS, EP82 Starlet, Nissan 350Z, FC RX-7, and many Subaru Imprezas, including Spec Cs.” 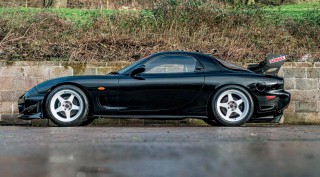 He’s more than dipped a toe in the water then, and a dalliance with an FC helped him decide that slipping off for a cheeky Wankel was very much his bag. “A friend of mine had an FD years ago, and still does,” he continues, “and I loved the timeless look of the car right from the start. The unique sound and handling they offer placed it high on my list of Japanese cars to own, and after owning an FC RX-7 I knew it was time for the FD.”

A tip-off from a mate put Chris on the trail of a tidy example that was for sale locally, a near-complete project with a few tasty bits, so he arranged a viewing to see what was what. The Mazda boasted a street-ported motor with a Garrett T04E turbo as well as some Japan Racing wheels, and all in all it looked like a pretty good base for what Chris had planned. So hands were shaken, dotted lines signed upon, and the merry-go-round span anew.

Not long after buying the car, however, the FD started having engine issues. (Alright, keep the gags to yourselves – we still maintain that Mazda rotaries are solid and reliable things if you look after them. Well, in general. This one wasn’t.) “At this point I decided to go and chase some power,” says Chris, always one to convert crises into opportunities. 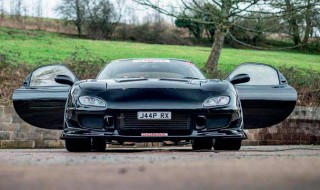 “After speaking with Chris and Dave at RotaryMotion, we opted to go full bridge-port and upgrade the turbo to a BorgWarner EFR8374. A few other supporting mods then followed to bring the car to the power I was hoping for.”

Now, we’ve got to take a moment to talk about porting. After all, this is something that comes up a lot when discussing rotary engines and it’s something akin to witchcraft. When Chris bought the car, as he says, it was running a street-ported motor, and what this essentially means is that the engine’s stock intake ports had been gently reshaped to optimise and increase flow. Usually the next step on from this is to try an extend-port, which basically involves making said holes a bit bigger. You lose a bit of low-end torque and suffer a rougher idle, but the trade off is a lot more urgency at the top end.

However, Chris didn’t want to muck about: he wanted to take the nuclear option, and that means bridge-porting. This entails extend-porting the standard apertures and then adding a whole extra eyebrow-shaped hole above. What this achieves is to make the engine rather less smooth, dramatically less economical, and massively noisier – all of which is what you want, as it leads to absolutely colossal percentage power increases. Coupled with all of these monkeyshines, the act of swapping out the factory twin sequential turbos for a sodding great single BorgWarner hooligan is similar in principle to attaching a longitudinal pendulum behind the driver’s seat which swings a sledgehammer directly into the base of your spine every time you floor it. 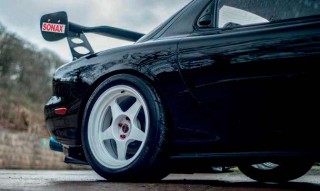 The details tell a richer story. Fuelling is fiendishly clever here, with a rising-rate Aeromotive FPR working with two sets of injectors in the billet fuel rails – 850cc primaries, whopping 1,680cc secondaries – and the concept of hugeness is rife throughout the build. Just look at the massive front-mount intercooler, the Blitz exhaust system that’s big enough to shove your arm in right up to the shoulder, it’s all big stuff for big thrills. Cunningly whipped into shape by an A’PEXi Power FC (which was painstakingly mapped by the experts at RotaryMotion), it’s making 550bhp.

That’s a very tasty number. And we’d recommend looking Chris up on Instagram – the handle’s @cjquicksilver – so you can hear how angry this staccato-revving monster really is. It’s a little bit frightening. “As with all rotary ownership, there have been some testing moments,” says Chris, “but once you’re sat with that bridgeported engine brapping away, it’s worth it!”

That Dorito-flavoured engine is very much the centrepiece then, but there’s a lot more to enjoy in this piquant smorgasbord of exotic fare. The badass stance that’s making your heart flutter is thanks to a set of HSD coilovers, hunkering the FD down over its superdesirable Desmond Regamaster seventeens. And for a generation of fans raised on ultra-realistic gaming and the Fast & Furious movie franchise, the exterior aesthetics are absolutely on point: Seibon is always a name you can trust, and their FEED-style carbon bonnet plays a blinder here, neatly matched by the vast carbon wing at the tail end. The combination of ’99-spec lights, C-West front bumper, side extensions and rear diffuser add up to a package that’s far from stock but by no means overblown – it all just looks right. Damn right, and aggressive enough to match the astonishing horsepower within. 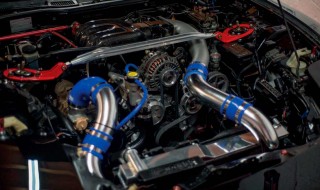 “The FD is seriously loud, and has a unique sound,” Chris grins. “When I’m driving around, everyone will turn and try to identify what the noise is - and then what the car is! Driving into shows it certainly gets lots of attention. The car is also a SONAX Detailing Academy UK sponsored car, so it’s taken to shows across the country plus I get the added bonus of having it professionally detailed before any event!” You can’t say fairer than that, can you? And now that he’s really got a taste for the Dorito life, it’s safe to say Chris is struggling to keep his plans for the Mazda from bubbling over; a brake upgrade is on the cards next, and then he’ll be pushing for even more power. Who knows how far that rotary can be pushed? It’ll certainly be fun finding out, brap-brapbrapping like a demented cyborg. We really should be thankful for those spicy little triangles, they do make life all the more interesting.

Thanks: “I would like to give a massive thank you to Chris Channon at SONAX UK / SONAX Detailing academy for sponsoring the car and taking care of that delicate Japanese paintwork! (www. sonaxdetailingacademyuk.com) Thanks also to Ian and the team at Motaparts Downend (www.motapartsbristol.co.uk), Chris and Dave at RotaryMotion (www. rotarymotion.net), and Well Chuffed Media for the coverage.

JDM wheel choices don’t get a lot cooler or more desirable than the iconic Desmond Regamaster. This name may or may not be familiar to you, but if not… let’s just say that these wheels are very much in demand right now. Incredibly light and strong, these are actually Russian-built rims which were made specifically for JDM aftermarket applications; indeed, one Regamaster variant was developed in conjunction with tuning heroes Spoon Sports. As well as being ultra-light, super-strong and endlessly desirable, they’re also rare enough to make hens’ teeth look extravagantly abundant. If you can find a set, you’re instantly winning at life! 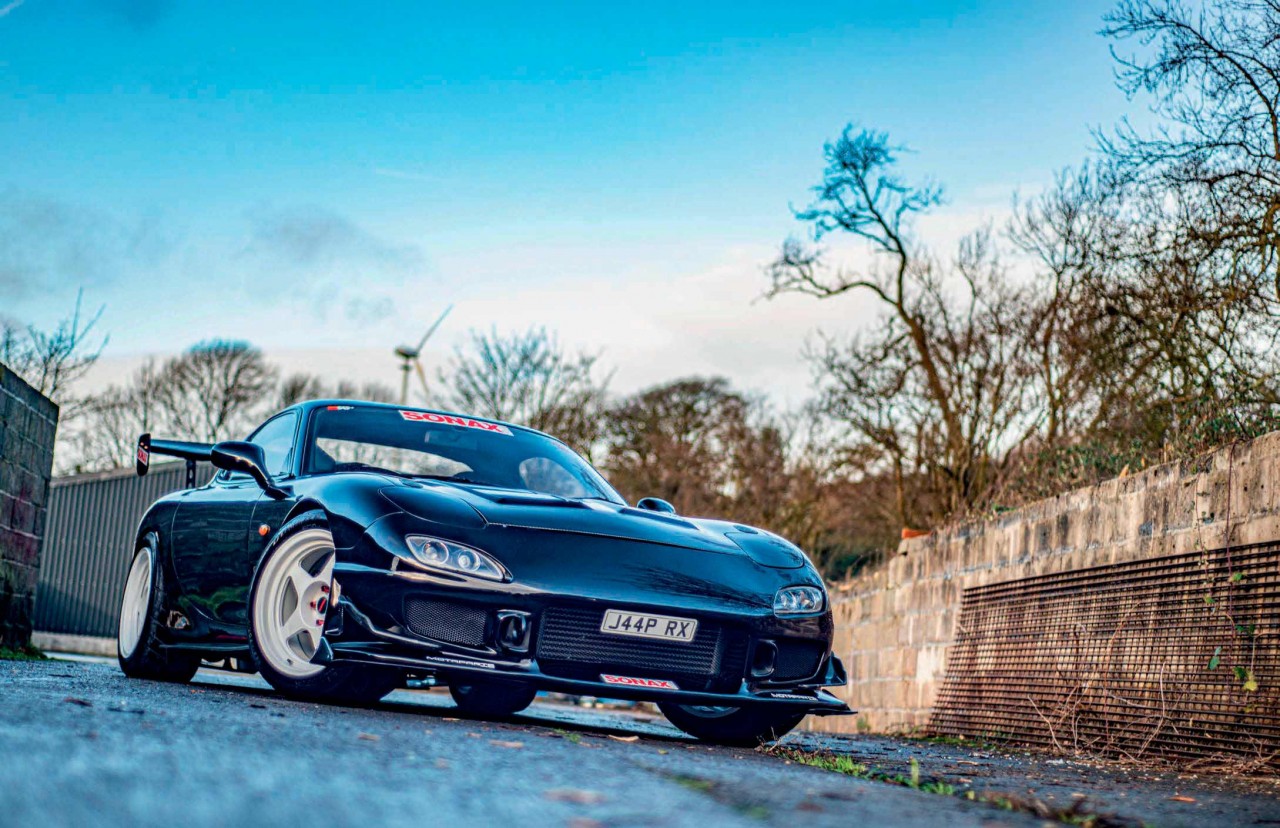 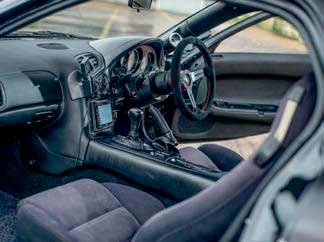 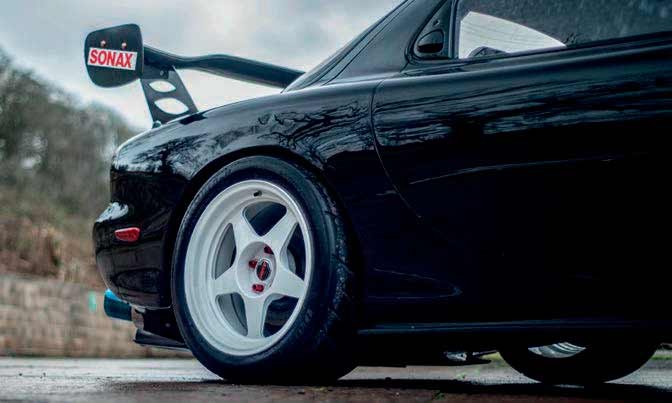 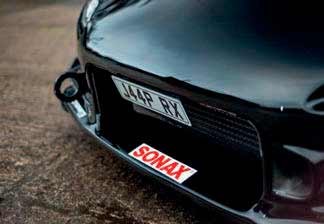 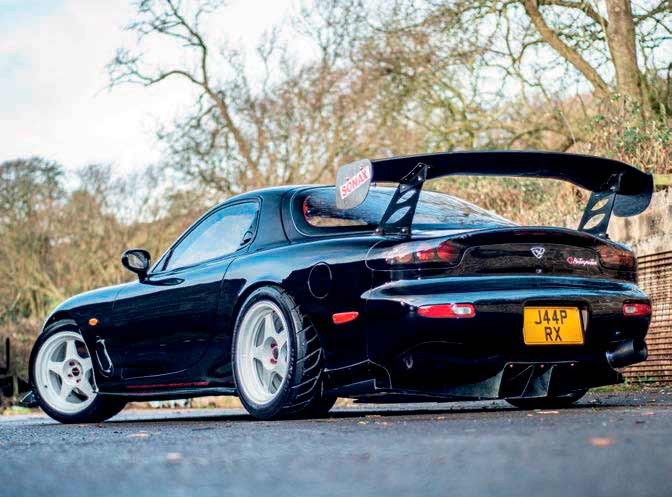 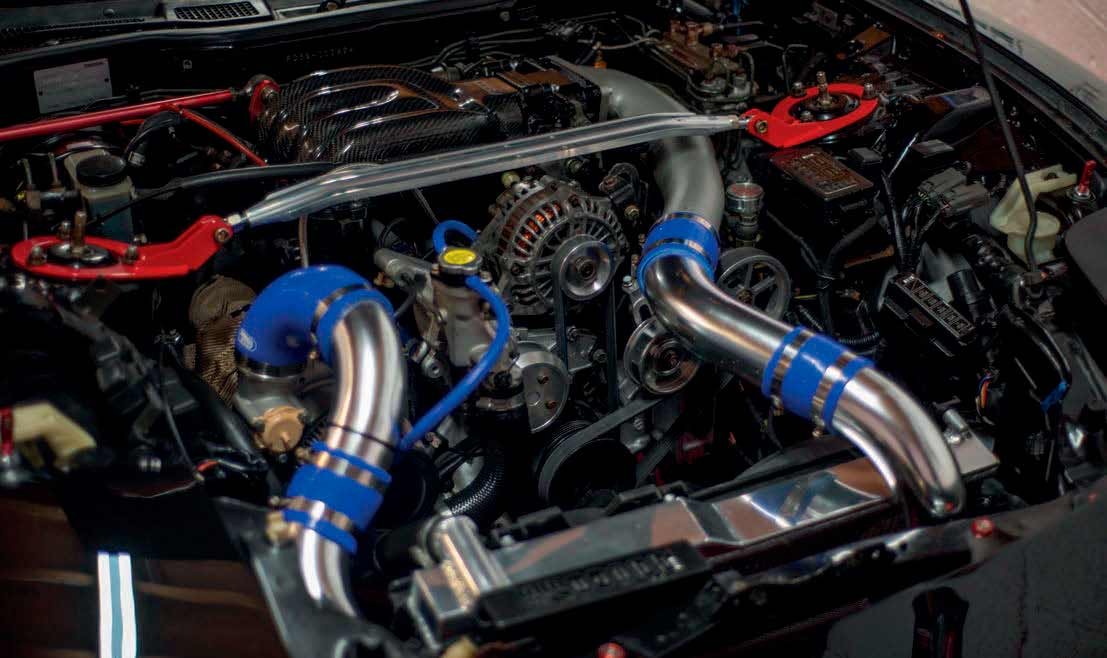 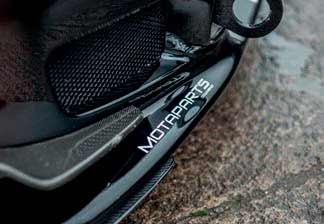 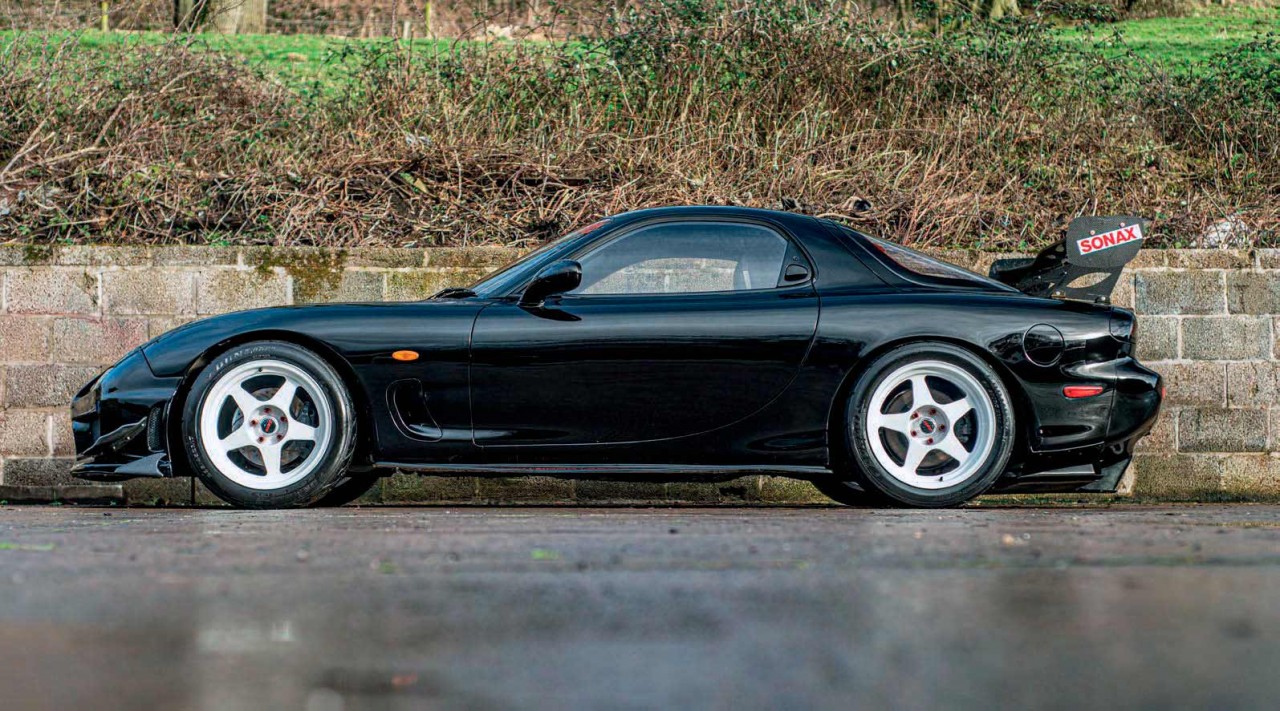 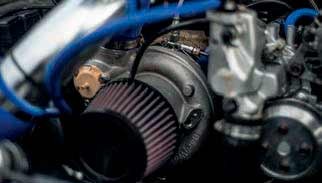 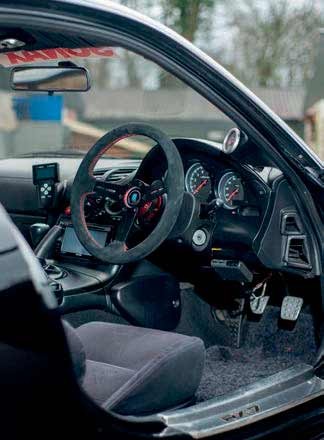 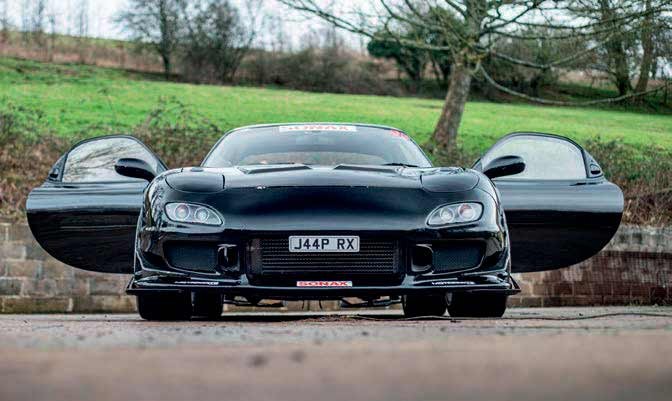 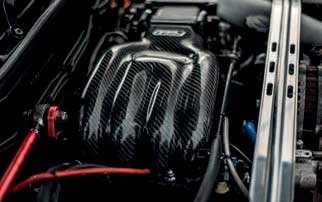