DTM Dream. What do you do if you spent your childhood lusting after an E30 M3 DTM car? Build yourself a stunning replica, that’s what! Words and photography: Robb Pritchard.

DTM Dream. A Peruvian owner’s amazing build of an E30 M3 DTM replica where he did all the work himself.

In an act of kindness, if not quite one of financial responsibility, Said Baba from Lima, Peru, did the honourable thing and saved an E30 from being dragged off to a scrapyard and crushed. Peru, like neighbouring Ecuador (for those who recall the 3.0 CSi, Alpina and 2002 stories from there over the last year or so) has some very strict rules about what can be imported, as well as very expensive tariff s on what you can, so the problem was that he couldn’t really afford to do a top-notch restoration. The engine was seized and needed a lot of work to get it going and there was also a lot wrong with the suspension and body so in what might be a familiar story for many who have started a project a little beyond their capabilities and budget it languished in the back of the workshop, gathering dust.

Said already owned his dream E30 M3, one of only two late-standard examples in Peru, so he still got his full fill of Bavarian master craft as a daily drive so to finally bring the project to life he decided to compromise and bought another E30 that had a good engine and built up a hybrid using the best parts from both cars. Job done. It wasn’t the most eye-catching restoration or showcase of skills, but it was driveable and sellable and so opened up some space in the workshop… But this story follows the fortunes of the bare shell that he’d stripped and harvested of parts. 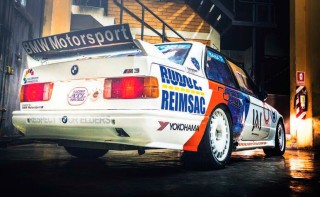 He could have just scrapped it to make space for the next project. Or maybe not… As just a shell it held the potential for absolutely any build that Said cared to imagine, but it was his cousin who suggested making what is arguably the ultimate incarnation of the E30, the DTM. Of course that was dismissed as just a crazy idea but it actually planted the seed in Said’s BMW fevered brain and he spent a few days mulling over what it would take to get the shell tearing around race tracks. The answer of course would be a massive amount of time and money. But he had been a weekend mechanic for years working on his and his friends’ cars, fabricating parts they couldn’t get into the country… so maybe he could use this as a project to practice his skills which could then act as a running demo to show them off…

More than a few evenings were spent online researching exactly what differences the DTM car had compared to the road-going M3… and it became very clear very quickly that although he could probably build a car that looked and performed like an ex-works Schnitzer car of the late ‘80s and early ‘90s a true BMW aficionado would be able to tell the differences a mile off. But who wouldn’t want to make a car that would be a worthy replica of the ones he used to watch when he was a boy? 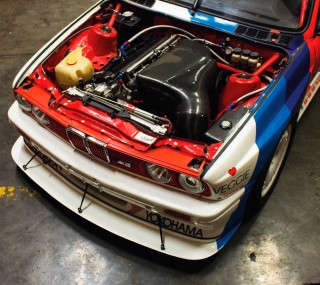 It wasn’t an easy decision to begin the build though. The only way to get the budget for it was to sell the M3. It was such a nice car that he always had offers for it and so he didn’t need to post an advert to sell it. (It actually found its way Juan Pablo Carrera in Ecuador whose pair of Alpinas we featured in June 2016). So with a fresh wad of cash in his hand the first thing to do was fabricate and fit the rollcage, and this was made to the exact DTM specifications by El Gato, one of the most well respected fabricators in Peru. “He said that it was unnecessary to fit a few of the bars for the Peruvian safety regulations so they were going to serve no purpose apart from adding weight, but I wanted it to be a good replica, so asked him to do it.”

But the more research he did and the more photos and YouTube videos he saw of the M3s battling Mercedes and Opels he realised it would be missing the point to build a replica of a race car without racing it… The biggest event in Peru, one of the biggest in the whole of South America, is the 6 Hours of Peru. At 35 years old it’s not only prestigious, it also attracts entries of over 50 cars spread over many classes and that’s what Said decided to build the car for. Without writing anything incriminating he had no experience of pushing a car to the limit in a legal and regulated setting, but that didn’t deter him and he sent his race registration in for a car that was still in pieces.

With the timescale for the build drastically reduced all evenings and weekends were spent in the workshop and Said did a lot of the work himself such as fitting an ATL cell tank, bigger brakes and rotors he machined himself, dual brake master cylinders, and some carbon-fibre works-like DTM style mirrors, floor and door panels. By far the biggest job though was making the suspension parts. In a perfect world there would have been CAD files he could just email to a fabricator but every online search he made came up empty. He did find a guy in New Zealand who had an original car and explained that he was just a fan who wanted to fabricate his own setup, not someone looking to make a business. There was no reply though but then closer to home, in Peru, he found someone who had an earlier Group A car who allowed him to unbolt parts to take accurate measurements. 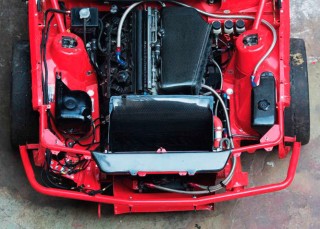 Armed with the correct diameter chromoly steel tubing he made a jig to situate them, as welding causes deformities, roughly tacked them together, mounted them in situ then increased the welds until the whole subframe was complete. The same process was repeated for the trailing arms and when it was all finished he finally got a reply from the New Zealand guy who sent a lot of photos and measurements. Said was pleased to find out that his own work was only out by a few millimetres here and there, and that could be rectified by adjusting the setup. He also made a set of lightweight control arms for the front.

Of course buying a full Schnitzer or M-tuned engine from Europe was completely out of the question, both for cost and for importation issues, so for the heart of the car he bought a rather sickly S54 out of a scrapyard E46 M3 which was good for 343hp. The car was also painted white with the iconic two-two blue and red stripes. But anyone who has ever built a car to race knows that there is never enough time to prepare everything before the green flag. Because the engine was over 3000cc Said was placed in the open class… which had an Audi R8 GT3 and a Ferrari 458 in it – not exactly machinery the E30 was on par with. Still, the event has many different types of touring cars and he qualified around middle of the grid.

But the lack of testing time was evident from the start. As soon as it was pushed the engine started leaking oil through the cylinders which caused a lot of smoke as well as a lack of power. The biggest problem though was the self-made control arms. Bouncing over the curbs pushed them far beyond their tolerances and they snapped. The spares were the same design though so even keeping off the curbs meant that two and a half hours of the race was spent in the pits. Still he finished a not all that disastrous sounding fourth in class, but although he had a seriously good looking car Said knew what he had to do to get it to be a great performing one. 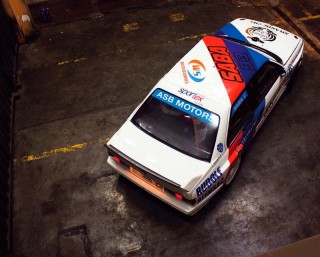 The engine was pulled out, stripped down and rebuilt with competition spec valves, springs, retainers and solid lifters with under-head shims. With a few curses about the customs fees the rods, pistons, crankshaft and camshafts all came direct from BMW Motorsport, as did the cylinder head. A custom tune was done by a company called Tuning Tech but the ECU was a standard one so it couldn’t be programmed too easily. Power was raised from a not too shabby 343hp to a much more serious 370hp, which is 30hp more than the DTM cars ever had.

The control arms were reinforced as was the rear subframe which had also started to crack in the race. Weight was also taken out as more carbon fibre was added wherever steel was unnecessary. Delving ever deeper into the intricacies of high performance parts he even machined himself a set of hubs that worked with a pressed bearing just like the race cars had as it’s much easier to change the bearing alone than the whole hub. Unlike Schnitzer though his starting point was a pair of standard E39 hubs. All of this took a year he came back to enter this year’s 6 Hours again with much higher hopes. However, although the engine had a lot more power this time Said found that once back on the circuit the ratios of the gearbox didn’t let it race to its full potential.

But that was a long way from being the biggest problem unfortunately. Machining a bearing race into the E39 hubs caused a critical weakness as he’d taken too much out of the metal to fit the bearing in. Again, hours were lost in the pits effecting repairs. Any chance of a good result was gone and again he finished fourth.

To get the same result after a year of work really wasn’t a cause for celebration so to be third time lucky in 2017 the car is undergoing another big rebuild. And this time it’s serious. He’s just finished installing a five-speed gearbox made by Samsonas Motorsport in Lithuania, which with the pacer added is actually a six-speed. It’s a dog-leg ‘box with the ratios Said chose himself. It’s also shorter than the standard E30 gearbox so he managed to install the engine five-centimetres further back to give a slightly better front to rear weight ratio. The exhaust needed to be redesigned to fit so now there is a dual 2.5- inch bore pipe which also has the advantage of making the car sound awesome too. The hubs have been redesigned, machined from scratch this time, which was a lot of work and a full carbon fibre air intake system has been fitted.

A few more kilos have been shed thanks to a thorough sandblasting and the first test is going to start after the respray so this time he’ll have months to dial the car into the track. The DTM was honed to perfection on the race track. So too is Said’s gorgeous replica and not just in looks, but in performance too. We wish him every success in this years’ event. 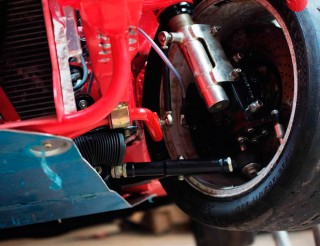 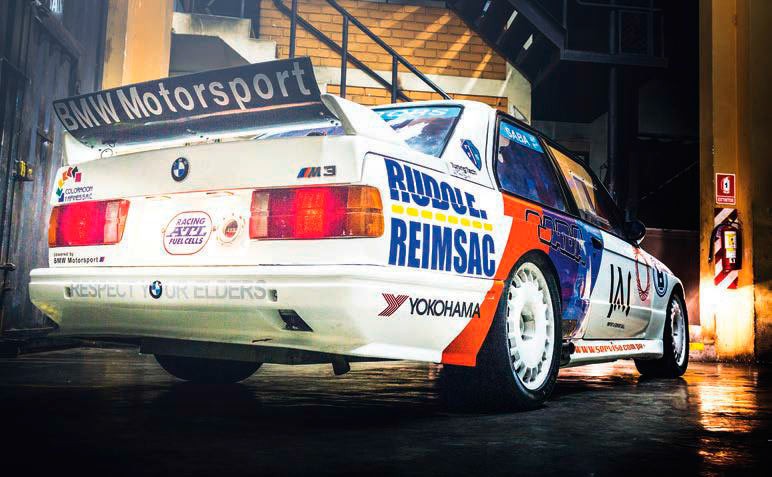 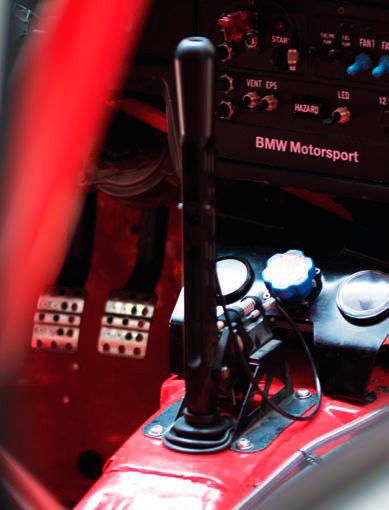 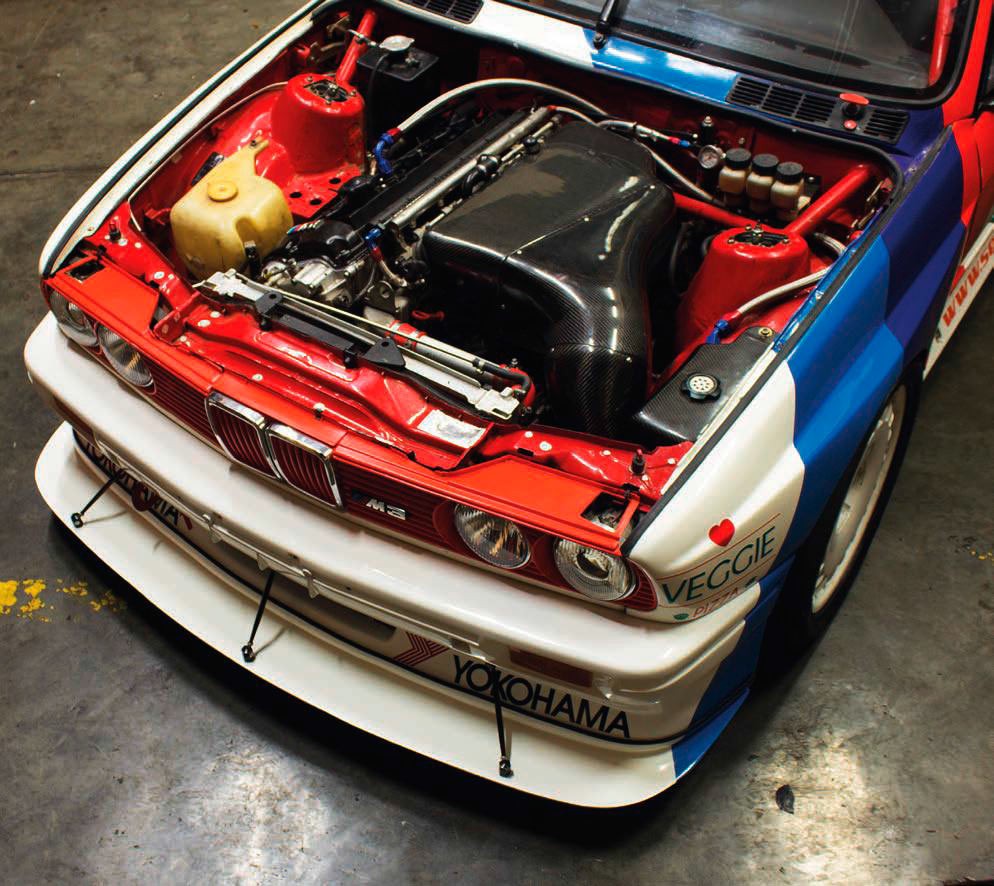 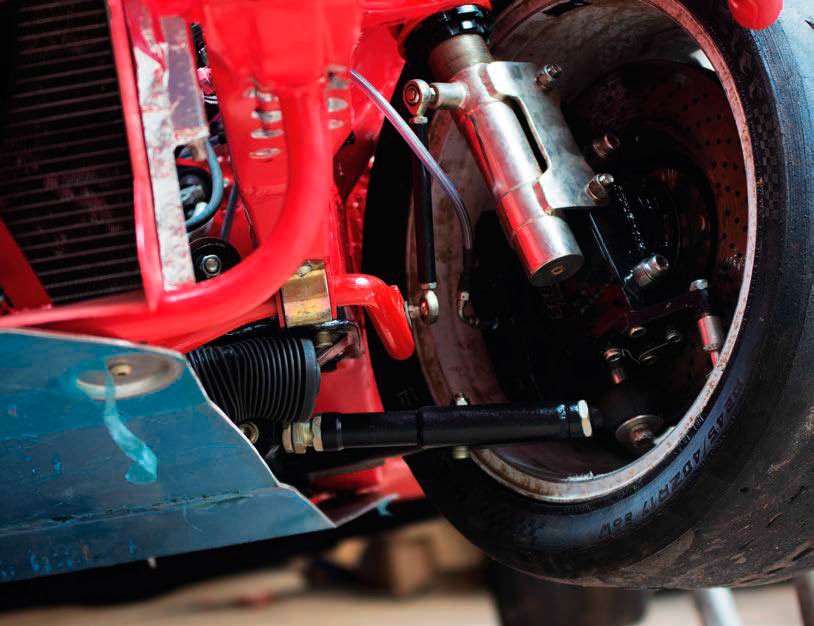 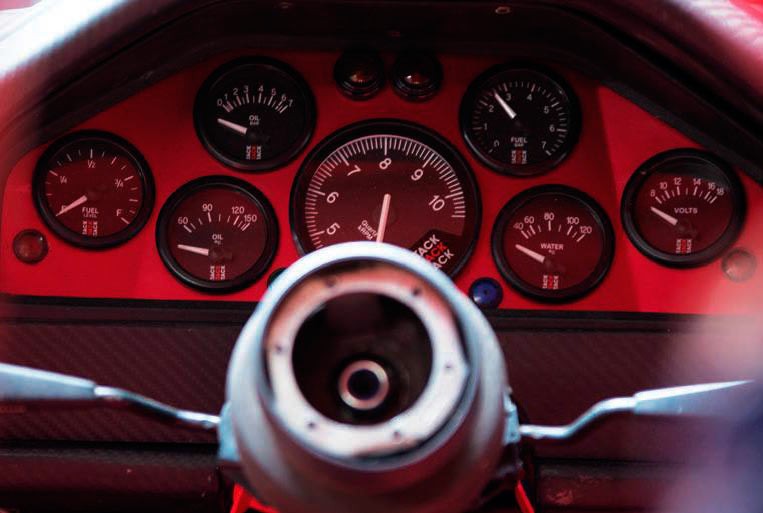 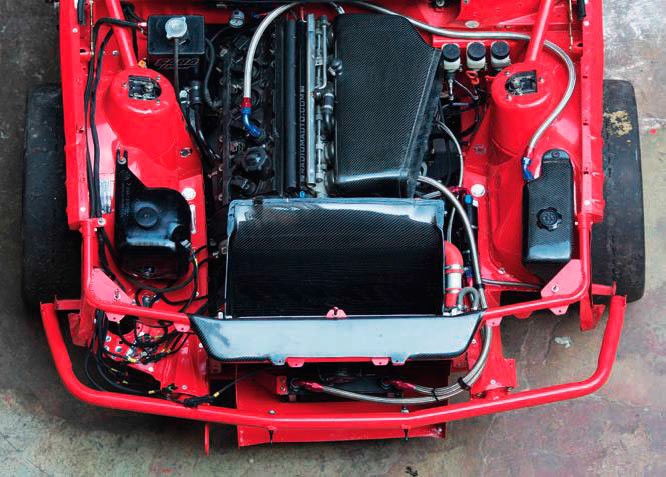 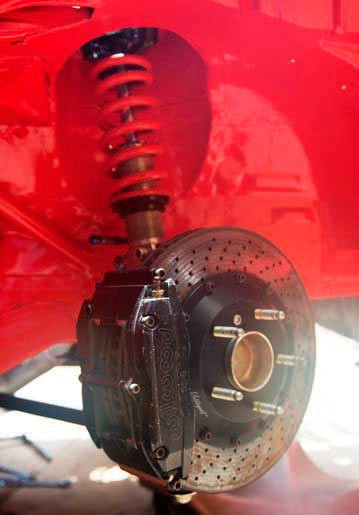 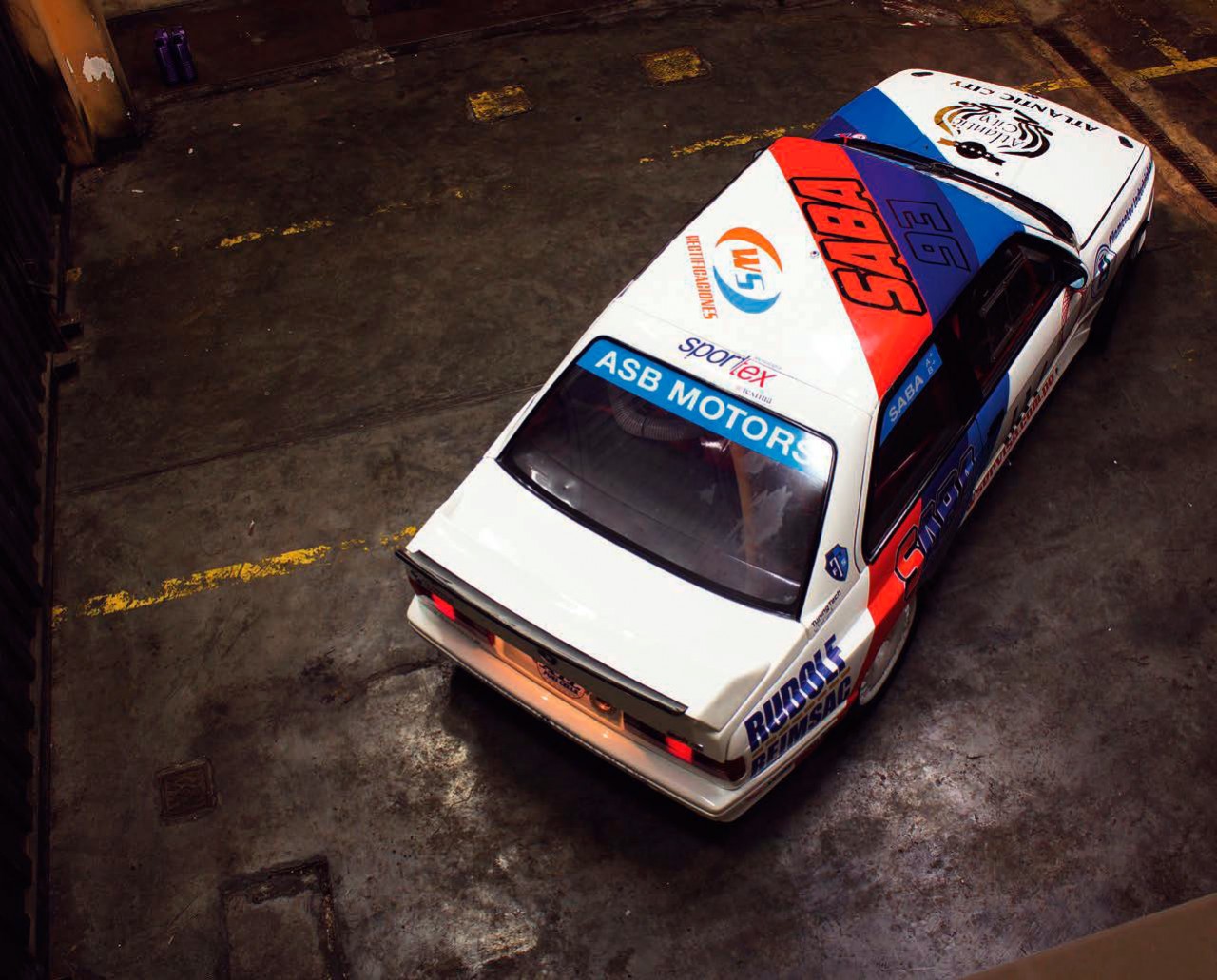 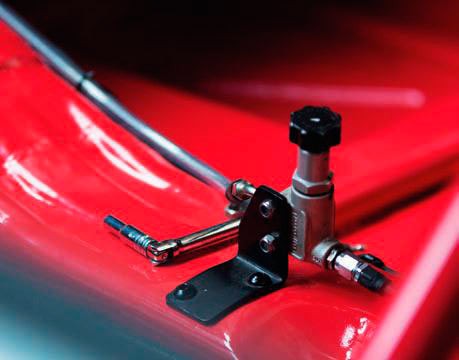