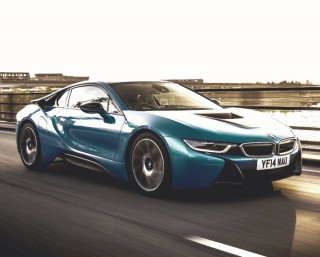 I’ve been waiting for the earliest 2014 examples of BMW’s otherworldly plug-in electric supercar to fall below £40k, but the i8 is holding strong.

When you look at how desirable and hard to find the first Tesla roadsters have become, this could be another vision of the future that’s worth quietly tucking away. And, let’s face it, the i8 has a lot going for it – great looks, massive road presence, 155mph performance and no range anxiety. The 7.1Kwh lithium ion battery powering a 131bhp electric motor coupled to a 1.5-litre turbocharged engine means you’re good for 30 miles on battery only and the little petrol unit will always get you home. The sprint to 60mph takes just four seconds and you even get a faux engine soundtrack complete with gearbox shift blip noises. If you’ve never driven an i8 you’ll be surprised at just how captivating they are. The butterfly doors are pure drama and, owing much to the old M1 mid-engined supercar, the i8 shape is a clever homage.

This is also a future-proof supercar that can glide in and out of ultra low emission zones and be compliant with the blizzard of upcoming emission legislation that’s likely to hit most cities in the UK soon. Wonderfully exotic, and with a hundred grand list price at launch, it had a ten-month waiting list at one time.

The UK has always been one of the i8’s strongest markets. Having said that there are still only 2000 on the DVLA mainframe and only 249 of those are 2014s, so I’d go for the earliest one you can find. A private seller in London has a grey 2015 with 27k and full BMWSH for £42,000 while another enthusiast in Aylesbury has a launch-year one-owner car in black with 22k miles and a complete history for £44,000. A little over £50k will snag you a 2016 car with low miles. So if you fancy some low emission, guilt-free heave with supercar looks and better value-holding potential than most performance iron, the i8 could tick all the boxes and then some.

‘The i8 has low-emission guilt-free heave and supercar looks’