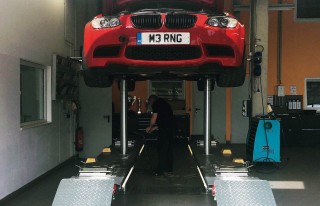 BMW E92 M3 Coupe Track Project. In my last report I was pleased with both myself and the car after the track day at Spa. As my confidence was growing in the car I was getting to the point where I could begin to pick out some setup flaws in the chassis. There was still a feeling of lightness on the faster sections and the rear of the car didn’t feel as planted as the CSL mentioned in previous reports.

After some heavy research, Raeder Motorsport at the Nürburging was mentioned several times as being one of the best workshops in the area and after closer investigation it turned out that the main man in charge there is VLN Race-winning champion, Christoph Breuer. When you go to the Nürburgring there are hundreds of BMWs roaring round, but only one or two companies are associated with the really fast cars in ‘Tourist Time’ – one being an E92 M3 set up by Raeder that has completed a 7:05 BTG (Bridge to Gantry), so discovering all of this, I knew that it was going to be the one to help set the car up.

So I called Raeder and spoke to Christoph and explained that the car didn’t feel 100 per cent and that it felt loose at the rear and not as planted at high speed as I’d like it to be. He said that if I booked it in with him for a full geometry setup he could guarantee it would be money well spent!

In between all this digging about, I had also spoken to KW UK about shock settings and it suggested Raeder Motorsport. As it turned out, Richard at KW UK was going to an RMA track day with the KW stand and would have technicians on-hand to assist with the car’s setup and suggested that I should come along. So I booked the M3 in with Raeder for the afternoon before the RMA day in the hope that the car would be set up as close as possible, so that any further adjustments would just be minute tweaks.

So when I arrived at the ‘Ring, I duly dropped the car off to the most beautiful, clean, modern and professional workshop I have ever laid eyes on! It puts BMW main dealers in the UK to shame with how clinical it is. I was greeted by Christoph Breuer who asked what I wanted from the car and so I explained that I wanted it setup solely for the Nürburgring, clarifying that I wasn’t bothered about how it drove on the road or any other track in the UK, providing it was perfect for the Nordschleife! At that point, he cracked a smile and confirmed it would not be a problem. I hung around for a while absorbing the sight and sounds of all the other race car builds and customer cars being setup or having modifications done – there were some real monsters in the making and I could just tell that this place meant business.

After a short while I went back into Christoph’s office and he mentioned that the damping was already set to more or less the settings it would use so I suggested that if he could see any improvements to be made on the geometry he should feel free to do as he wished. I then noticed the particular person who was working on my car was scratching his head and while he was corner weighting the car he kept coming back and forth, front to back adjusting a little here, though without getting the results he clearly wanted. He then got a bit of paper, wrote down the corner weights and took it into Christoph’s office.

Christoph took one look at the figures, walked out to the corner weight machines, pulled one plug from the front left and one from the back left, swapped them round and smiled, looked at the new figures, smiled again and went back to the office. I found this very amusing as it was an easy mistake to make.

Once it was all set up, a print-out sheet of the car was given to me to show what the previous settings were compared to the new settings. The new camber settings looked very aggressive, the front ride height was left where it was but it was lowered a further 10mm at the rear.

The biggest change was to the rear passenger side of the car. It was toeing out, which would make the rear of the car want to overtake the front (no wonder it felt loose!). When Christoph saw this figure he asked me if I really drove it like that on Nordschleife, when I confirmed that I had, he laughed saying it must have been a very crazy car to drive. They set the rear of the car with 4mm overall of toe-in on the rear. When he told me, I thought that was really excessive but he explained that as the rear of the car compresses the geometry changes and with these settings the rear wheels should be parallel with the fronts.

I was happy so far but a little bemused about the shock setup as after looking at the paperwork, very little had been altered, only the front made a fraction stiffer. From my research I knew if you stiffen the front of this car up any more it will understeer but lowering the rear and with the geo setup Christoph assured me this would compensate.

I did ask why they only altered the low speed compression and not the high speed or rebound? His reply was that it did not need it and whoever set the damping up on the car originally had done a good job! I was quite flattered, but still a little apprehensive as I had convinced myself it was the dampers that made the car feel like it was a little bit floaty on the fast sections. Christoff assured me it would be okay and to go away and try it and if I didn’t like it, to bring the car back and they would try some other settings…

So the next day I was on track the minute the barrier opened and instantly noticed that the rear end of the car felt absolutely amazing even on my sighting laps to check out the track conditions and get some temperature in the tyres. When I started to push harder the rear end was so planted I could hardly get it to step out sideways on even the slowspeed corners, where previously the whole car felt like it wanted to try to swap ends. I did soften the front end off a little but after further inspection the tyres where shot, so much so that when I looked at the inside edge after this trip they were down to the wire. I will have to investigate a little more with a heat gun and read across the whole tyre to see what is really going on to see if the extra camber is actually needed.

Since Jeremy Clarkson went to the Nürburgring on Top Gear I have always been interested in the ‘Ring and my goal was to crack ten minutes. That soon became nine minutes after almost cracking the nine-minute barrier in a 136hp Suzuki Swift Rent4Ring car rental. Now with the M3, the goal has been to achieve a sub-eight minute time – on this trip with the new setup and added confidence in the car I managed 11 laps im just over the eight minutes, and then it finally happened, a 7:59.76. I must say I’m not an emotional person, but you would have thought I had won the Formula One World Championship. I was shell shocked, completely exhausted physically and mentally and I even parked up in the pits and nodded off for ten minutes. For me this was a great accomplishment and a day I will always remember. It didn’t take long before I started to wonder what the car and I could do with some more modifications, maybe some more power or the addition of some aero – the saga continues…

An impressive sub-eight minute Bridge to Gantry time at the ’Ring after some set up work at Raeder Motorsport.