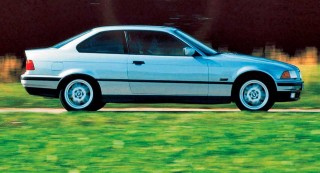 This time out we show you how to tackle a common issue on the E36 step-by-step – replacement of the ABS sensor.... Words & Photography: Andrew Everett.

Just like a random airbag light, the ABS light on any car can be a nuisance. It just so happened that the ABS light on my E36 decided to ping up one day – ignition off and restart and it went out. But the next day it came on, and stayed on. A quick scan with Autologic came up with all four sensors faulty – damn, that means the ABS block or ECU is faulty. But the codes were cleared, the engine started and the light was still on but now showing just the front right (UK driver's side) sensor. That’s better.

So, I had a sensor in stock from febi Bilstein and set to replacing it. Now, according to the workshop manuals it looks like 20-minutes of work and on a new car, it probably was. But, after 25-years or so, this was going to be the usual fight to the death.

I learned years ago that taking the official line would result in a broken ABS sensor retaining screw because it rusts into the sensor, and that the sensor would not budge because the iron front hub will have rusted around the sensor, resulting in a vice-like grip. The proper way to do it involves more dismantling but works out easier in the long run.

This procedure is from an E36 and that means the Z3 as well, but you can apply the logic to other older BMW’s such as the E46.

On the E36 with it’s simple self-learning ABS system, you can plug a new sensor into each corner until you find the faulty one. The light will go straight out once the ECU detects four working sensors.

1 With the car jacked up, secured on axle stands and the wheel removed, start by unplugging the ABS sensor from the car loom on the small black connector box under the wing. If the lid doesn’t clip shut, use a cable tie to secure it.

2 Unplug the ABS connector by pressing the two inner tangs together and pulling them apart – they’re not hard to do. Check carefully for green corrosion in the pins on both parts of the connector as this can cause all kinds of trouble with the ABS.

3 Now use a suitable Allen key to undo and remove the brake disc securing screw. You can insert a screwdriver into one of the disc vents through the caliper hole to hold the disc still whilst you do this. Use a spline drive to remove rounded out discs screws.

4 Removing the caliper is easy enough – there are two Allen key slider pins that the caliper mounts on behind a couple of plastic caps, and on the E36 the caliper carrier to hub bolts are 16mm. Torque to 110Nm on reassembly.

5 Some BMWs have an earth wire on one of the ABS sensor. On our car it was broken off – feeling hopeful, I remade the connection and fitted it again but it made no difference. I plugged the new sensor into the car loom and the ABS light went out.

6 Now to remove the hub, the first job is to carefully remove this dust cap. Use a thin screwdriver and hammer it into an edge to get a grip on the cap and lever it out. Do not be tempted to pack extra grease on reassembly!

8 The hub will now pull off. Chances are, it will leave the inner bearing race behind on the stub axle but don’t worry, you can either leave it there or draw it off later and press it back into the bearing.

9 Now to remove the brake backplate. If yours are rusty and horrible like these, invest £30 or £40 in a new pair. They are secured to the hub by three 10mm bolts – they undo but you may need to hammer a 9mm socket onto rusty ones.

10 Here we can see the ABS sensor in all its glory. This is an earlier type with the stainless steel casing – later ones were all plastic. The red dot is to the right of the ABS sensor retaining bolt’s threaded hole – spray WD40 in here!

11 Forget trying to undo the bolt, chances are it will snap off either in the hub or in the sensor. That means drilling and tapping – very boring. Instead, grind the top of the sensor away until you reveal the bolt thread, then chisel the sensor away from around the bolt.

12 Now we can drive the old sensor out by whatever means – a hammer and an old ugly screwdriver or a 3/8 socket extension. This one came out leaving the stainless steel casing behind but that was soon removed with a thin screwdriver.

13 Next, the sensor hole in the hub needs to be filed out until it is super clean, the new sensor slides in and out with ease. On reassembly you should smear some copper grease or similar into the hub so that the sensor won’t rust in.

14 Now to get the sensor retaining bolt out. You can use heat here but I left it stewing in WD40 for 20-minutes. With a pair off locking grips, I gingerly slackened it a quarter turn, then back again… In a few goes it was loose and came out fine.

15 Here is our new sensor, a nice quality item from febi Bilstein. There are plenty of ABS sensors out there and I’ve been lucky with the cheap eBay ones – there’s no need to buy from BMW in all honesty.

16 Reassembly is as for removal, but once the sensor is bolted in, slide the hub back on and check that the sensor doesn’t foul the trigger ring. Unlike 2005-onwards BMWs, these trigger rings were made from stainless steel. Clean them up before refitting.