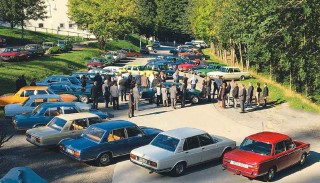 OUT AND ABOUT  Happy Golden Anniversary E3!

September 1968 was a significant month for BMW. Not only were the E9 coupé and the M30 engine introduced, but the all-new E3 saloon also made its debut. The arrival of this particular model was akin to parking a tank on Mercedes-Benz’s front lawn. Up until this point, the large, luxurious saloon car had been very much the preserve of the Stuttgart giant. But the E3 really was a game-changer, in that it combined luxury and superb build quality with engineering excellence and a truly sporting driving experience.

The E3 marked a very clear statement of intent, and it was anticipated that it would build upon the phenomenal success of the smaller Neue Classe saloons.

Accordingly, BMW selected a spectacular location in the heart of Bavaria to show off its new super saloon, and it was to this same place that the German E3 Club returned last month, to replicate that initial press launch photograph.

Over 40 E3s gathered in Wallberg in September, under the supervision of club chairman Reinhard Queckenberg, and set about turning the clock back 50 years. Reinhard delivered the same speech that BMW’s then director, Helmut Boensch did at the car’s press launch, and then the cars were arranged exactly as they had been on that historic day in 1968, for a club photograph. Early Series One E3s were placed prominently, and the result is really effective. It certainly made me do a double-take! 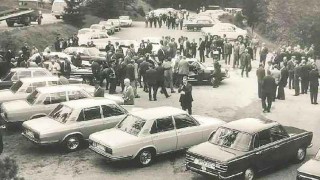 The E3 Club of Germany enjoys a large membership and, currently, 500 cars of all variants feature within its ranks. This number is about 10 times greater than the equivalent known surviving E3s in the UK, and the club organises a thriving diary of events, including exhibitions at major classic car shows, road trips, social events and even an annual driving holiday to far-flung parts of the European continent.

During the 50th anniversary celebration weekend, club members took part in a road trip across the stunning landscape of Oberbayern, centred on Irsee in Allgau, Walting in Altmuehltal and taking in Munich and the old Cold War communications site at Raisting.

The highlight for most was a visit to BMW Classic’s headquarters on Saturday morning. Martina Roessle and Manfred Grunert from BMW Classic very kindly hosted a guided tour of the workshops, and the extremely impressive collection of cars owned by the company; all housed in the fully-restored and updated building that was BMW’s first manufacturing site, way back in 1916. This fantastic facility is a must-see attraction for any BMW enthusiast, and Martina and Manfred are only too pleased to welcome die-hard fanatics to this atmospheric and historic site.

The contents of the car park were, however, for any E3 fan the main talking point. In addition to BMW Classic’s own stunning 3.3L – in Arktisblau with contrasting flawless white leather interior – Kai Nolte’s 3.3Li immediately caught my eye. Thought to be the only long wheelbase E3 ordered in Koral red, Kai’s car was also fitted with rare ASS Scheel seats from the factory. Originally delivered to a cosmetics company in 1976, it’s thought that the bright red colour of the car was intended to match the firm’s new line in lipstick!

On a similar theme, one of the most striking aspects of the weekend was the sheer variety of colours that the E3 was offered in. BMW championed the ‘safety colour’ idea in the 1970s, and it was fantastic to see so many bright and lurid shades of yellow, orange, red, green, blue, white and turquoise cars in attendance. In stark contrast, the ubiquitous silver that’s so often seen on new cars today, made up a small proportion of the cars present.

Georg Lutz, of Procar Motorsport, in Albaching (just to the east of Munich), is probably the foremost E3 restorer in Germany, and quite a few of his creations were present. This included not one, but two incredibly rare, genuine, Alpina B2S saloons finished in fabulous period colours, such as Golf Yellow and Chamonix White. The B2S featured a very similar specification to its E9 sibling with the same designation, and Alpina really pushed the boat out when developing the car. The standard 3.0Si’s Bosch D Jetronic fuel-injection set-up was replaced by a Kugelfischer system and this, along with a more aggressive camshaft, raised the compression ratio. This, combined with some cylinder head work, saw a 25% increase in power output – from 200 to 250hp. The result was pretty impressive, even by today’s standards, let alone in 1973; 0-60 was dispatched in 6.4 seconds, with a top speed of just under 150mph!

The E3 Club’s celebration of the model’s 50th birthday was a phenomenal success due to the hard work of club organisers and the dedication of its members. It was a tangible expression of the sheer enthusiasm that exists for this often forgotten and overlooked example of BMW’s recent past. However, the club isn’t content to halt there though; it’s already planning its next celebratory road trip for 2019, to mark the 50th anniversary of the first E3 sales taking place in the UK… 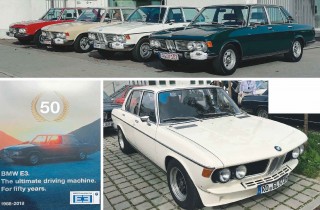 The BMW E3 Club’s celebration of the model’s 50th birthday was a phenomenal success.