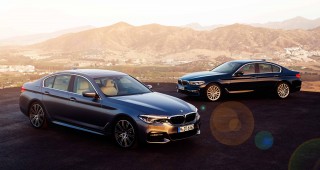 BMW UK has now released pricing and spec details for the new 5 Series that will be hitting our showrooms in February next year and before one looks at specification levels, the new car does seem to be quite a bit more expensive than the outgoing F10 generation machine. Four different engines will be available when the car goes on sale – 520d, 530d, 530i and 540i – and these will be available in a variety of two- and four-wheel drive guises. Unlike other markets the UK will only have two trim levels – SE and M Sport – Luxury spec won’t be listed over here for the simple reason that with the F10 hardly anyone spec’d it! The two diesel models will be available as SE and M Sports with or without xDrive while the 530i will only feature rear-wheel drive in either SE or M Sport trim. The (for now) rangetopping 540i will only be offered as an xDrive model, and can be spec’d either as an SE or M Sport. Full pricing can be seen in the accompanying table but if we look at the two diesel models (as these are the only two where a proper like-for-like comparison can be made) then the new 520d SE is £3410 more expensive than the F10 and the new 530d M Sport is £2715 dearer than the outgoing equivalent.

All UK models will be equipped with the eight-speed automatic transmission (the standard version with steering wheel-mounted paddles for the 520d, the Sport version for all other models) so for the first time in the UK the 5 Series will no longer be available with a manual ‘box. Given the auto with paddleshift on a F10 520d was a £1685 option this goes some way towards explaining the price difference between the new and old models.

SE-spec highlights include: 17-inch V-spoke style 618 wheels (520d/520d xDrive only) and 18-inch multi-spoke style 619 wheels for all other models, a 20GB hard disc drive (HDD) memory, air conditioning, automatic with two-zone control, Bluetooth Hands-free facility with USB audio interface and Voice Control and BMW ConnectedDrive Services. Leather upholstery is standard along with heated front seats, there’s Cruise control with braking function and the navigation system is the full Professional version, even on the base model. Front and rear lights both feature LED technology while front and rear PDC will be a standard fitment, too.

There isn’t enough space here to delve into the entire options list but there are a number of packages to choose from – Comfort, M Sport Plus, Premium, Technology, Visibility – along with items such as Adaptive Drive, Variable Damper Control and the much reported Gesture control from the 7 Series G11/G12. Next month we’ll get to slip behind the wheel of the new Five so make sure you check back then for our full driving impressions.