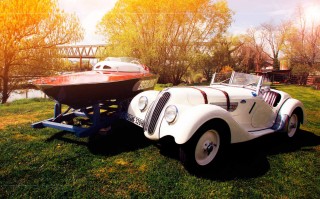 BMW 328 and Berlin III. Beauty and the…Boat! We look back at the 328 and discover a wonderfully restored 328-engined boat.  Pre-war 328.  The Italians have often powered boats with engines of their best racing cars but the German examples are quite rare especially when it comes to the prestigious 328 Roadster. Words: Gérald Guétat. Photography: Henri Thibault Archives: Rolf Guersch & BMW.

When the BMW 328 Roadster was released in 1936, BMW was still a quite young automobile manufacturer which had been producing its own car models only for five years. The Bavarian firm which began with the manufacture of aircraft engines by taking control of Rapp Motoren Werke in 1916, started making motorcycles in 1923, on which the famous BMW emblem appeared for the first time. The symbolism of this logo has been subject to several interpretations, some observers viewing propeller blades in a blue sky. Actually, aeronautics was there but only by the resumption of the old logo of the Rapp factory, a black circle with its original horse in the centre was replaced by the blue and white colours of Bavaria. Five years of existence is a very short life for a car manufacturer, especially in the context of the economic crisis of the early 1930s. 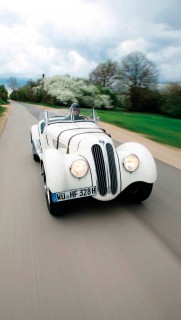 Thus budget was lacking and the engineers had to surpass themselves to find low-cost but efficient solutions. In addition, BMW also had to quickly obtain racing results to stand out in front of its English and Italian competitors on European circuits. As commented by the German magazine Motor und Sport issued upon the release of the new BMW in early 1936; “We can consider the 328 as a full sports car which opens a new way for the future.

What the customer who takes some pleasure in the sports driving nowadays wants is an automobile combining the ease of maintenance and the life expectancy of a passenger car with a clearly superior power and the possibility of participating successfully in competitions.” We could not better describe the reasons why the new BMW so rapidly acquired such an enviable and international reputation. A breakthrough in terms of lightness and speed, the 328 was the result of teamwork between several talented engineers and designers, based on the continuation of former models. Among the men who made BMW famous, Fritz Fiedler was one of the most prominent characters in charge of new model development, to be credited with the 303 in 1933, the 315 one year later, the 326 in 1936 and his crowning glory, the 328, also in 1936. One of his best and closest engineers was Rudolf Schleicher, a former motorcycle racing driver and later designer of the famous BMW six-cylinder engine among many other successful features which pushed the make to the forefront as an innovative firm. In addition, he was in charge of the factory racing division at the end of the 1930s.

At the bodywork department were again two key men, Peter Szymanowski and Wilhelm Meyerhuber. The former as chief of the styling studio at BMW was an innovator and a pioneer, one of the first to make an extensive use of wind tunnel testing. Under his leadership, were designed nothing less than the 319, the 326, the 328 and also the 327 under the management of Wilhelm Meyerhuber, appointed director of the newly created BMW design department in 1937. Like Szymanowski, Meyerhuber was a talented artist, as good in aesthetics as in technology. The legendary 328 Mille Miglia Roadster prototype of 1940 was down to his pencil. Another man of much talent should be added to the list even if not part of the BMW permanent staff . Wunibald Kamm, a pioneer of aerodynamics, founded two major research institutes in Stuttgart and produced celebrated streamlined cars, especially the two based on the 328, the K1 (1938) and the K4 (1940), the “Kamm-tail Mille Miglia” Coupé crafted by Carrozzeria Touring in Milan. 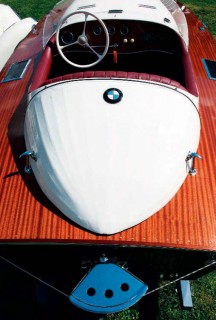 With such people around its cradle, the 328 was a great car born from the best minds and hands. With limited time and money, its engineers had to concentrate on simple and effective solutions. Its tubular frame with box cross members chassis was stiff , strong and light. The front-wheel suspension received lower transverse links and an upper transverse spring while the rigid rear axle had semielliptical longitudinal leaf springs.

In a way, the 328’s bodywork derived from the Type 319/1 but a new headlight design and a much longer bonnet, locked down by two leather straps, made the model definitely unmistakable. Under the hood, with no money to design a DOHC engine, Fiedler made a new aluminium alloy head where the valve timing was activated by the original side camshaft of the former 2.0-litre block but with reverse lever and transverse pushrods. Some drivers and mechanics quickly noticed that its spark plugs were located quite deep in the centre of such a sophisticated head and the socket supplied by the factory to change them wasn’t long enough to prevent burnt fingers when proceeding to check a plug on a hot engine! In 1936, its output of 80hp was quite a feat for a 2.0-litre engine in a car weighing only 830kg. The 328 was sold only as a Roadster though some fifty nine chassis were also sold to various coachbuilders. The volume production started up only in spring 1937 as, from the middle of 1936, the car was mostly made available for racing.

In fact, Fiedler’s six-cylinder with its new head had true racing potential as shown by its racing versions with up to 135hp and more, better known initially as the ‘Mille Miglia’ version. The BMW Roadster’s prize list lengthened ceaselessly after a first victory as soon as its early test on the Nürburgring circuit. In 1937, Prince Bira won the Tourist Trophy in the 2.0-litre class at Donington Park, finishing third overall. At the German Grand Prix in 1938, the 328 totally dominated the 2.0-litre category. Much fame came also from the results of the car in Italy, in the Mille Miglia of 1938 and 1940, as well as at the Le Mans 24 Hours in 1938 and 1939, where some special racing versions and Touring Superleggera ultra lightweight bodies and high output engines were entered in both races.

These impressive results went on to the postwar years even if BMW had to face a hard fate in 1945. The company was dismembered between the Allies on the West and the Soviet occupation of its major car factory at Eisenach in the communist zone. Then, both cars and engines went on a strange career bearing various badges. At Bristol in England, where Fritz Fiedler was sent to work in 1945 to help production, the Bristol 400 was derived directly from the BMW 327. In England too, the Frazer-Nash cars clocked a great racing career based on components seized after Germany’s surrender. In the meantime, in the Soviet zone which was to later become the Germany Democratic Republic, the Eisenach factory produced BMW, then EMW, cars, initially identical to the 321 and 327 models, as soon as 1945. In the western occupied zone, the BMW-Veritas, formed by ex-BMW employees was more competition oriented. 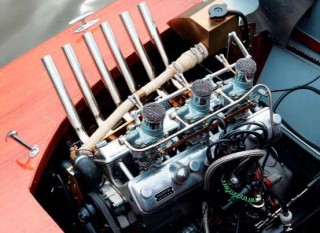 The make also produced also some marine versions of the six-cylinder 328 as its power and lightness could logically attract the rare German motorboat racing drivers in these difficult times. Indeed, having a racing runabout built in the early 1950s was reserved to a small golden elite. Young Jürgen Baginski was a member of it, just like his fellow countryman Christoph von Mayenburg, an internationally reputed powerboat champion.

Baginski and von Mayenburg’s parents emerged out of the disasters of the war more quickly than others because they were producing essential goods – aspirin tablets and toothpaste. In 1950, von Mayenburg introduced his friend Baginski to Max Steaves, a well known owner of the eponymous boatyard in Lübeck. Naval architect and builder of several successful racers, he was the designer and the builder of the Berlin III boat you can see here.

Max Steaves, as this was a fashion of the time in Europe, took the general lines of drawings promoted by the American powerboat federation as ‘Class D racing runabout’. Entering in the 2.0-litre European runabout Class 2, the boat was equipped with a six-cylinder BMW-Veritas, tuned in its most powerful racing configuration to some 130hp, inspired by the famous Mille Miglia car version. 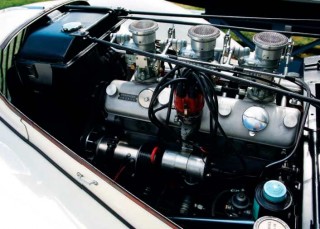 With his finely built and fast hull, Baginski began an honorable racing career in the early 1950s which was to lead him a few years later up to the title of World Champion in Cannes on the French Riviera, with a later boat named Berlin VI. At the wheel of Berlin III, the young driver initially took more local victories, as on Starnberg lake in 1953.

As a good gentleman driver and following again the advice of von Mayenburg, Baginski entrusted the care and storage of his racer to Kurt Gersch, another pilot and renowned boat builder settled in Mainz on the Rhine river. In the middle of 1950s, Baginski had new raceboats built, carrying the same Berlin name, numbered in a strict chronology. Obsolete, the third Berlin incarnation was abandoned in a shed in the area and it is there in 2003, nearly fifty years later, that Rolf, Kurt Gersch’s son found the old and forgotten racer. The boat had suffered from five decades of neglect. It had no longer its engine but important elements as its original hoods, much of its hardware and even its much sought-after original BMW badges were still in place. An entrepreneur based in the North of Germany, Torsten Müller, decided to go ahead and started the restoration project with the precious help of one of his collaborators, the master carpenter Sven Hageborg. 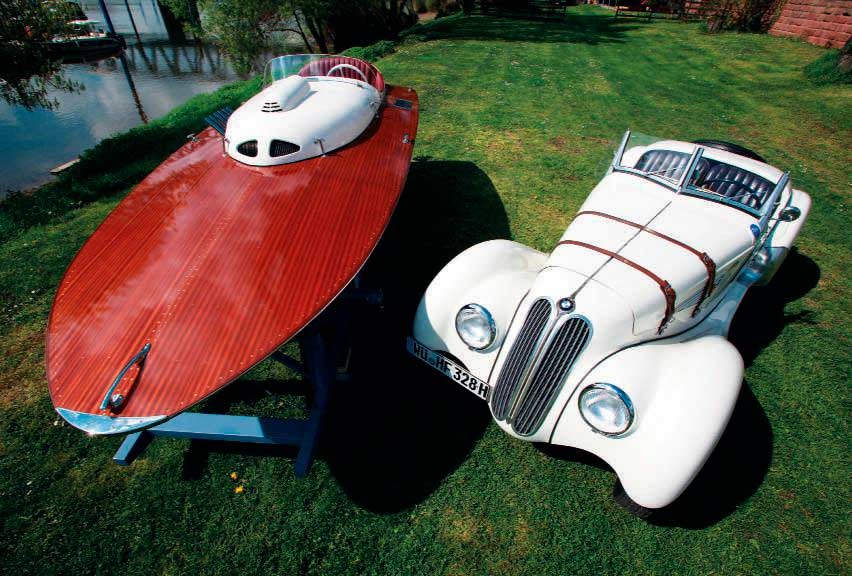 The light wooden hull was to be magnificently reconstructed to receive again the famous six-cylinder, a BMW-Veritas of the late 1940s patiently tuned into an original style Mille Miglia racing version. Then, the long-awaited day of a reunion in Mainz came with the launching of Berlin III on the Rhine river, at Rolf Gersh’s marina, precisely where some sixty years before his father released the gas pedal for the last time before it went into hiding. But, this time, a 328 Roadster built in the late 1937 was invited to join the party. Driven by Thomas Feierabend, a well known BMW restorer from father to son, this 328 is today part of the family classic car collection. 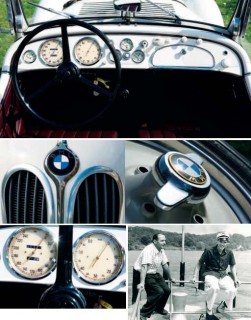 This chassis number 85 053 was part of the first series built, delivered new to BMW dealer Autotrac Breslau. The car was raced by Adolf Brudes, a well known BMW factory driver living in Breslau. At the 1938 Spa 24 Hours race, he teamed up with Paul Heinemann and finished fourth overall, second in the class. He also drove to record a podium, finishing third in the 1940 Mille Miglia over the shortened Gran Premio Bresci course, teaming up with Ralph Röese at the wheel of a factory 328 spider.

Helmut Feierabend, Thomas’s father found the car in Budapest some 25 years ago. The family workshop restored it completely, including the engine in Mille Miglia form of more than 135hp. Today, the white 1937 Roadster is a very fast car capable of speeds up to 200km/h, reliable and handling like a true gentleman’s sports car, but ready to race, as it was intended in 1936 by the BMW engineers in charge of the creation of one of the most sought-after pre-war sports classics.

The long-awaited day of a reunion in Mainz came with the launching of Berlin III on the Rhine river, at Rolf Gersh’s marina.

Jürgen Baginski in competition in Berlin III in the 1950s and with his friend Kurt Gersh (sitting on the left).

The light wooden hull was to be magnificently reconstructed to receive again the famous six-cylinder, a BMW-Veritas. 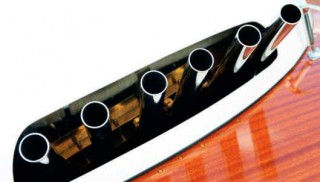 BRAKES: drums all round