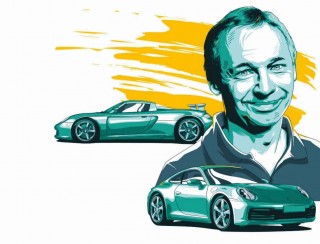 ‘I’ve been with the 911 half of my lifetime’ An engineer on the Porsche 911 since the 993, August Achleitner retires this year. ‘Mr 911’ discusses future-proofing an icon. Photo and Illustration Chris Rathbone.

August Achleitner joined Porsche in 1983. Only now, in 2019, is he leaving – to retire. In his career he’s shaped several generations of the talismanic 911, helped create the Boxster family, fathered the mighty Carrera GT and – you sense – had the time of his life. The kind of symbiotic professional life – employer and employee flourishing in each other’s service – that salves your fears about the capitalist system, it came about for two reasons: Achleitner, whose father worked for Ford and BMW, deciding to study engineering and economics in Munich; and a moment in childhood that put Porsche on his radar. ‘When I was young we had a neighbour with a red 356 coupe, which he polished endlessly. To me it was so different to everything else on the road at that time. It really impressed me. My dream car was always a Porsche, a red 911.’

If it was perhaps inevitable that Achleitner and the Porsche 911 would find each other, no one could have foreseen the extent to which they’d shape it each other’s lives. ‘Only three years after I started at Porsche I was responsible for a new axle design for a client – I was working for the separate Porsche Engineering Group at the time. That led to me and a colleague engineering a new axle for the 993-generation 911 – this was my first contact with the 911. My first part was the rear brake disc for the 964 Turbo. And I’ve been very proud of it all this time because it entered production without any changes.

‘From 1989 to 2000 I headed up the vehicle concepts and packaging department and, within this phase, I had been responsible for the concept of the 996 and the 983, the Boxster – we created this new family of small sports cars. After the Carrera GT I became head of the 911: my first project was the 996, second generation, and the first 911 I was completely responsible for was the 997, both generations. Then the 991 and now the 992. I’ve been with the 911 half of my lifetime!’

As Achleitner discusses the evolution of the world’s most famous sports car, you can’t help but think of the seismic changes some new 911s have introduced: liquid-cooled engines on the 996; turbocharged Carrera engines on the 991.2. Impressive though the new 992 most certainly is, isn’t it a little conservative, technically?

‘We could not expect such a big jump, because we had to prepare the 911 for the future with this car,’ says Achleitner. ‘There are many smaller improvements, new assistance systems, the eight-speed PDK gearbox, the possibility to install an electric motor in the future, and a completely new electrical Panamera-based architecture. The Panamera is already a hybrid, so now we have all these new systems and control units for the powertrain in place on the 911. It’s a big step forward but it’s also forced a lot of development work, and budget.

‘I would argue the new wheel sizes are a big step forward – we have 20-inch front wheels and 21-inch rears as standard on the Carrera S. Why? In the Carrera S the weight distribution is 38 per cent front and 62 per cent rear. As we say, the music plays in the back of the car – all the necessary and important things happen here. With the 993 we went to a new rear axle, close to what we have today. How can we improve again? We had to enlarge the contact patch. You can increase the width but that increases drag. Increasing the diameter is the second solution, giving greater grip for no increase in frontal area and an improvement in ride comfort, since we can reduce the pressures a little. Of course there is a little more weight, but we did a lot of calculations and simulations – the advantages are bigger than the disadvantages.’

Weight sits uneasily with Achleitner, as does complexity. And yet he’s just delivered a new 911 heavier in like-for-like guise than the car it replaces. ‘I love the idea of the lightweight 911. Dynamically, I don’t like the idea of a hybrid. It’s heavy, you have two engine systems in one car… It’s the most complicated solution, and a complicated solution is never a light solution. But we had to try to find the best compromise – we had to prepare the 911 for the future. Maybe London will decide to close the city completely to petrol engines, in which case a normal 911 would not be allowed. That’s why we did it, to prepare the car for the future. I feel more safe now about its future.’

From the man who’s spent half his life tirelessly working on the beloved 911, what final act could be more fitting than safeguarding its future?

Six questions only we would ask

Tell us about your ﬁrst car

‘It was a VW Beetle – I didn’t have it long because someone drove into me. Fortunately my father worked for BMW at the time – I used his discount because he had a company car.’

Which achievement makes you most proud?

What’s the best thing you’ve ever done in a car?

‘The best thing I’ve ever done professionally was the Carrera GT – part of my heart still belongs to that car. It was a chance to put economics aside and do all the best solutions from the technical point of view. That was a dream for me.’

Tell us about a time you screwed up…

‘The 40-years anniversary edition 911 [996, 2003] did not sell as well as we’d hoped. The problem was it was in competition with the 996 Carrera 4S, which was cheaper than the 40-years car and had the wide body, which people loved. We did things differently for the 50-years car and it sold out.’

‘I prefer the power and the precision of today’s cars.’

Company curveball: who said ‘This car is useless!’?

‘Maybe Ferdinand Porsche, because in the beginning it was felt nobody needed this car. [It was the verdict of one of Porsche’s test drivers]. But nobody’s ever bought a 911 for just getting from A to B – it’s a sports car. It just happens to be a very practical sports car, because of the unique layout.’