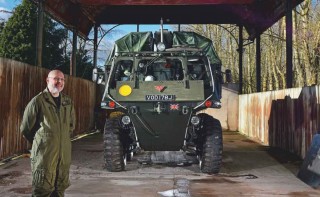 Alvis Stalwart and BMW 635CSi E24 also in my garage

Paul Sims. Only one vehicle would do the job for this prominent rangefinder specialist. Words Giles Chapman. Photography Will Williams.

ALSO IN MY GARAGE

Paul Sims is doleful when he contemplates his Alvis Stalwart. It slumbers beside his home in the rural west of England, and he’s in no position to wake this gigantic six-wheeler. Sims’ expertise is in rangefinders, hefty distance-measuring devices employed in both World Wars to pinpoint enemy warships and, latterly, bomber aircraft. Little of their British history is recorded, and he’s accumulated a huge archive of rangefinder information, with plans to create an online resource cataloguing their contribution to the country’s defences. However, Sims wants to go further still. He aims to transport three- and four-metre rangefinders to coastal and hilltop vantage points for public demonstrations. 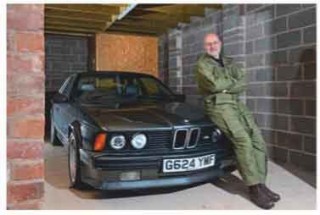 “The experience is like having your eyes very wide apart with a view of incredible crispness,” he enthuses. “The 3D effect is amazing.” Sims long ago decided the ideal vehicle to ferry these pieces of vintage apparatus – which took a team of nine to manhandle in WW2 – was a Stalwart. His grandfather worked on them as a mechanic at the Military Engineering Experimental Establishment in Dorset, and the sheer scale of these amphibious behemoths awed Sims when he clambered into one as a kid in the 1970s. They don’t come up often, so when he was offered the very last Stalwart – built in April 1971 – in 2017, he had to act fast. “It was the sole opportunity to get the thing I really wanted,” he chuckles, “so I decided to have it whatever.” The vehicle, complete with crane, was restored in 2011 but, despite its legendary indomitability (they are so strong they were deliberately used to set off mines in airstrips in Aden), keeping it outside was undesirable: “It’s basically a boat hull that fills when it rains. If it’s exposed, then it’ll rot. Luckily my landlord had a spare Dutch barn, we came to an arrangement.”

As for using ‘Molly the Stolly’, fate made an uncomfortable intervention. Sims must take things easy because he is still recovering from surgery after a hernia. Fortunately, he has his all-time dream car, a E24 BMW 635CSi, for convalescent mobility. Still, he occasionally, and carefully, climbs up some stepladders to turn over the engine of the Stalwart and pump the fluids around, but has yet to actually drive it. “Because of my age and its ‘historic vehicle’ status, I don’t need an HGV licence – even though it weighs 10 tonnes,” he explains. “But it’s as wide as the biggest tractor. It’s physically demanding even with power steering. And the clutch is incredibly heavy.

“People call it a roadgoing ship, and it’s apparently like a wandering supertanker on the road. The main issue is the permanent six-wheel drive and the two steerable front axles. On a grippy road surface you get terrible drive wind-up, although that’s scrubbed off on loose terrain.” There’s plenty to consider just in owning a Stalwart, but its former owner intends to give Sims a tutorial on the vital maintenance regime. Merely accessing the mechanicals requires a stevedore’s agility, and Sims has bought a Churchill brake-testing unit (it scrawls G-force rates on to graph paper) because nothing else can do the job. “Being my own MoT tester is quite a responsibility,” he adds. Sims is now planning his maiden voyage to Evesham this June, stitches permitting…