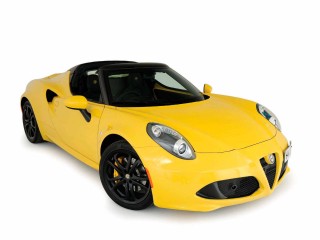 Alfa 4C: the truth… Alfa Romeo 4C buyers’ guide. The truth about Alfa’s mid-engined sports car. Buyers’ Guide everything you need to know about buying, driving & owning. Underrated masterpiece? Flawed genius? Here’s the truth about Alfa Romeo’s controversial mid-engined sports car – and everything you need to look out for when buying a 4C. Story by Richard Dredge. Photography by Michael Ward.

On paper, Alfa Romeo’s 4C Type 960 mid-engined sports car has it all: exotic carbonfibre chassis, potent turbocharged engine, lightweight agility and show-stopping looks. But when it was launched, the 4C’s price was perceived by some as too steep, while its chassis set-up was, reported many testers, too edgy. Time has brought fresh perspectives. Is now a great time to buy a 4C? 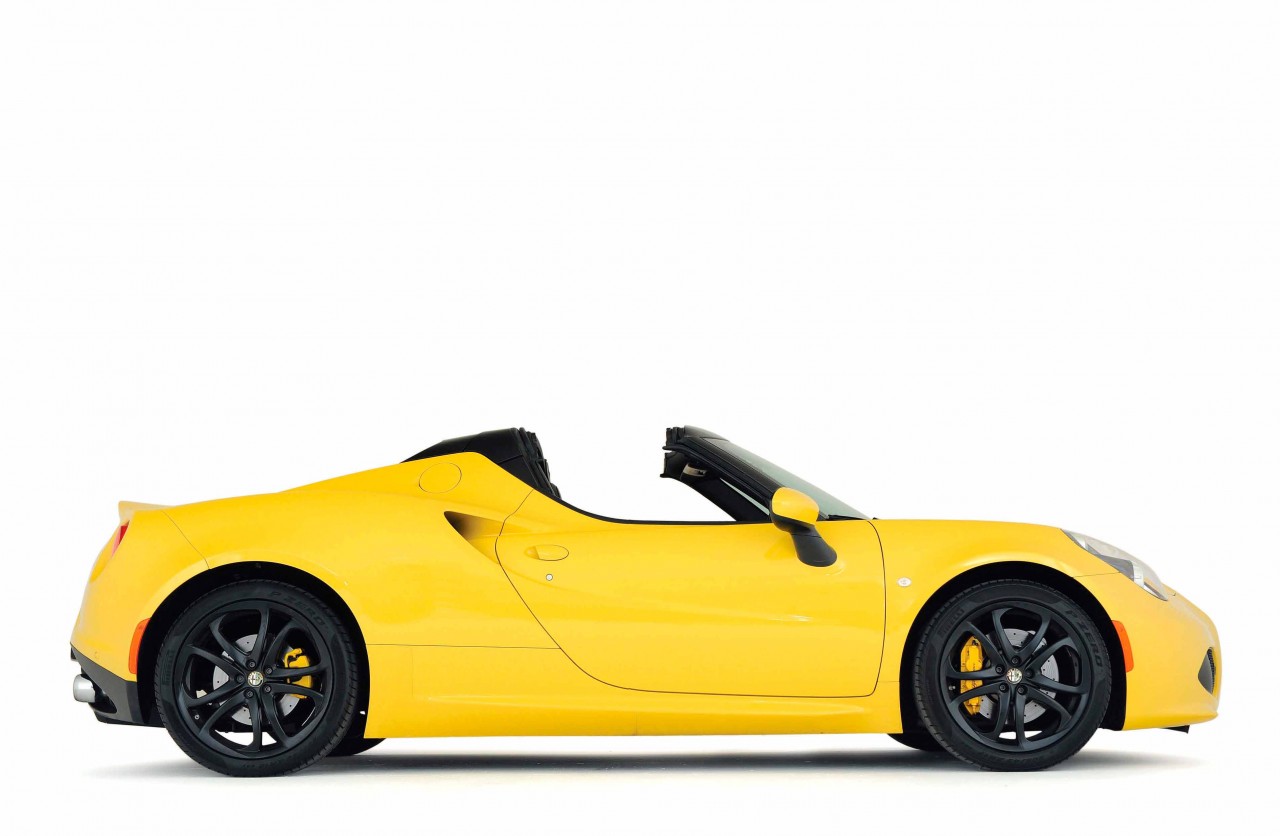 We got our first glimpse of the 4C Type 960 in concept form at the March 2011 Geneva motor show. Two years later the production car was revealed in coupe form, but the first eager buyers would have to wait until 2014 before their cars were delivered. The first 1000 examples were Launch Editions (400 in Europe, Africa and the Middle East, 500 in North America, 100 for everywhere else).

By summer 2015, the open-roof 4C Spider was on sale, featuring faired-in xenon headlamps (which were now optional on the coupé), an upgraded hi-fi and the option of a redesigned air intake system with improved transmission cooling, for track day fans. The arrival of the Spider coincided with a revised coupe with new front dampers and strengthened panels on either side of the engine bay.

To mark half a century since the introduction of the Duetto, in 2016 a 50th Anniversary Spider went on sale in the UK only. Limited to 50 examples and priced at a hefty £67,505, each one came in Competizione Red, Giallo Prototipo (yellow) or Madreperla White and featured only cosmetic tweaks over the standard car, including a carbonfibre surround for the instruments, 10-spoke 19-inch alloys and a numbered plaque on the dash.

The motoring press has been buzzing recently about a revised 4C that’s set to be shown later this year, before going on sale early in 2019. Alfa engineering boss Roberto Fedeli has already gone on record to say that no 4C will feature a manual gearbox and as a result, any changes are likely to be relatively minor.

Alfaworks’ Jamie Porter is easily the best-known specialist for the 4C. He comments: “I suspect a revised car would adopt electric power steering, as the unassisted set-up of the current car has attracted quite a lot of criticism.”

With a kerb weight of just 925kg it’s easy to see why the 240hp 4C is so rapid. At launch, Alfa’s European sales boss, Louis-Carl Vignon, reckoned that on tight, twisting roads the light and compact 4C could potentially leave a Bugatti Veyron for dead – tough talk.

While the 4C is fast and well balanced, in standard form it takes commitment to take it by the scruff of its neck and drive it to within an inch of its life on public roads. In many ways, this is a car that’s more at home on the track.

All 4Cs come with Alfa’s DNA system. As well as the regular Dynamic, Natural and All Weather modes there’s a Race setting too. ‘R’ mode allows the 4C to be driven much harder before the electronic aids cut in to save your skin; the ASR is disabled altogether, while the stability control intervenes to aid stability under harsh braking.

There’s a tendency to tramline and the brakes lack feel on the road, but they’re much more reassuring on track, where they can get up to temperature. Brembo track-spec pads are used at the front, but the rears are standard; upgrading the rear pads gives more bite once things are hot.

It’s a similar story with the tyres. All 4Cs are supplied with Pirelli Zero Corsa AR tyres which are road-biased, but there’s an ARR alternative for cars driven on track. Once hot these are fantastic, but if conditions are cold and/or wet they can be nervous.

Jamie Porter at the Alfa Workshop has developed a package of adjustments that are widely acknowledged to unleash the 4C’s full potential. For road use, £450 sorts out the front geometry while £2500 prepares a 4C fully for the track, with a remapped ECU and revised rear suspension added to the mix.

With most 4Cs having been barely run in, and most still under warranty, faults and wear aren’t something that you should expect to encounter. The main exception to this is a tired turbocharger, although this is only likely on a car that’s regularly been driven hard on track. Whistling noises might be evident, but it can be hard to tell when a replacement turbocharger is needed; expect to pay around £1300 for a specialist to do the work.

The 1750cc engine is fitted with a cambelt that has to be replaced every five years. There’s no set mileage recommendation but Jamie Porter suggests a self-imposed limit of 60,000 miles. Poor engine access means replacing the belt is a pig of a job, which is why it’s a bit more costly than you might expect, at £650. An ECU remap is one of the most popular 4C mods. The Alfaworks remap boosts peak power to 280hp while maximum torque is increased to 310lb ft; at the same time the torque curve is also flattened out, so in-gear times are reduced, while the four-pot’s driveability and flexibility are both improved by more than you’d think possible.

The 4C’s gearbox doesn’t give problems and neither does the diff, but the driveshafts are fitted with a spider joint which can fail on high-mileage cars. This wear-and-tear item costs £350 per side to fix. It’s usually the offside joint that fails and you don’t have to replace the driveshafts in pairs.

The 4C’s monocoque is made of carbonfibre, while the outer panels are all various types of plastic. Bodywork damage is unusual and when it does occur it’s usually major because of a track day excursion. While outer panels are available, monocoques aren’t; when someone buys a 4C new, they have to sign a contract that says they’ll send the car back to Italy if it needs major repairs. Subsequent owners aren’t bound by the same rules, but this makes no difference as replacement monocoques aren’t available in the UK. It’s obviously worth checking the panel alignment, but also check the subframe which may well be bent in a big impact.

More likely is stone-chip damage to the soft paint, especially across the nose and bonnet. A caring owner will have fitted clear protection film (Alfa now offers this as an option), but if the car has had a respray it’s not necessarily because of accident damage.

The front lower wishbones are fitted with a ball joint that wears; cars used on track days are especially likely to be suffering from this. Putting things right is easy enough, but unfortunately the whole wishbone has to be replaced as the ball joint can’t be renewed on its own. Expect an independent specialist to charge £450 to put things right.

The steering is prone to wandering and has very little self-centring because of the lack of castor (it’s set at just two degrees). It’s possible to fit wishbone spacers that tweak the geometry slightly – enough to make the car feel much more stable when cornering at high speeds. A set of eight spacers from Alfaworks costs £300, with different versions available depending on how the car is driven.

The rear suspension has a small amount of passive steering built in, but revised wishbones will transform stability in corners. A pair of these costs £864 excluding fitting, so it’s not a cheap mod, but it is money well spent if you do much track driving.

The interior is Spartan so there’s not much to go wrong. The trim lasts well and so does the instrumentation, switchgear and electrics. You obviously need to check the seat bolsters for wear and that all of the electrical equipment works, but there are no weaknesses that have materialised yet.

Says Jamie Porter: “Driven carefully, a 4C can return 50mpg, but in everyday use you should expect closer to 32mpg. On a track day I’d expect around 12mpg, though, which can get costly when you fill up with super unleaded. The Pirelli AR rear tyres typically last 6000-8000 miles while the ARRs will probably need to be replaced after just 4000 miles; replacements cost around £160 apiece.”

The cheapest 4Cs are now dipping below the £40,000 mark. Very few have breached the 10,000-mile barrier but we came across one that had notched up 34,000 miles, priced accordingly at a very tempting £33,000. As long as you’ve got £40,000 in your pocket, you’ve got your pick of cars, including some that have been improved by Jamie Porter. If your budget stretches to £42,000, a Spider is within reach, although most are priced from around £45,000. The most costly Spiders are generally priced at £50,000 for a delivery-mileage car, although there is the odd example priced above this.

Jamie Porter adds: “Launch Edition cars are worth seeking out as they’re very highly specified. They sold for £52,000 when new but the same car bought new now would be around £65,000. Whatever you buy, check what extras are fitted; some high-spec cars have the same asking price as cars with very few options. A popular extra is the Racing Pack which brings lots of carbonfibre for the interior, along with revised springs and dampers, thicker anti-roll bars, a sports exhaust and bigger wheels.

“We’re likely to see a revised 4C within the next year and this is common knowledge, which might soften values soon. What’s more likely to make the 4C more affordable, though, is an increase in the number of used cars coming onto the market. Alfa has offered some keen lease deals, and many of those cars will be coming to the end of their term soon which means they’ll be entering the used market, increasing choice and possibly reducing values.”

Overall the 4C is holding its value well. The soft-roof Spider attracts a slight premium over the coupe. 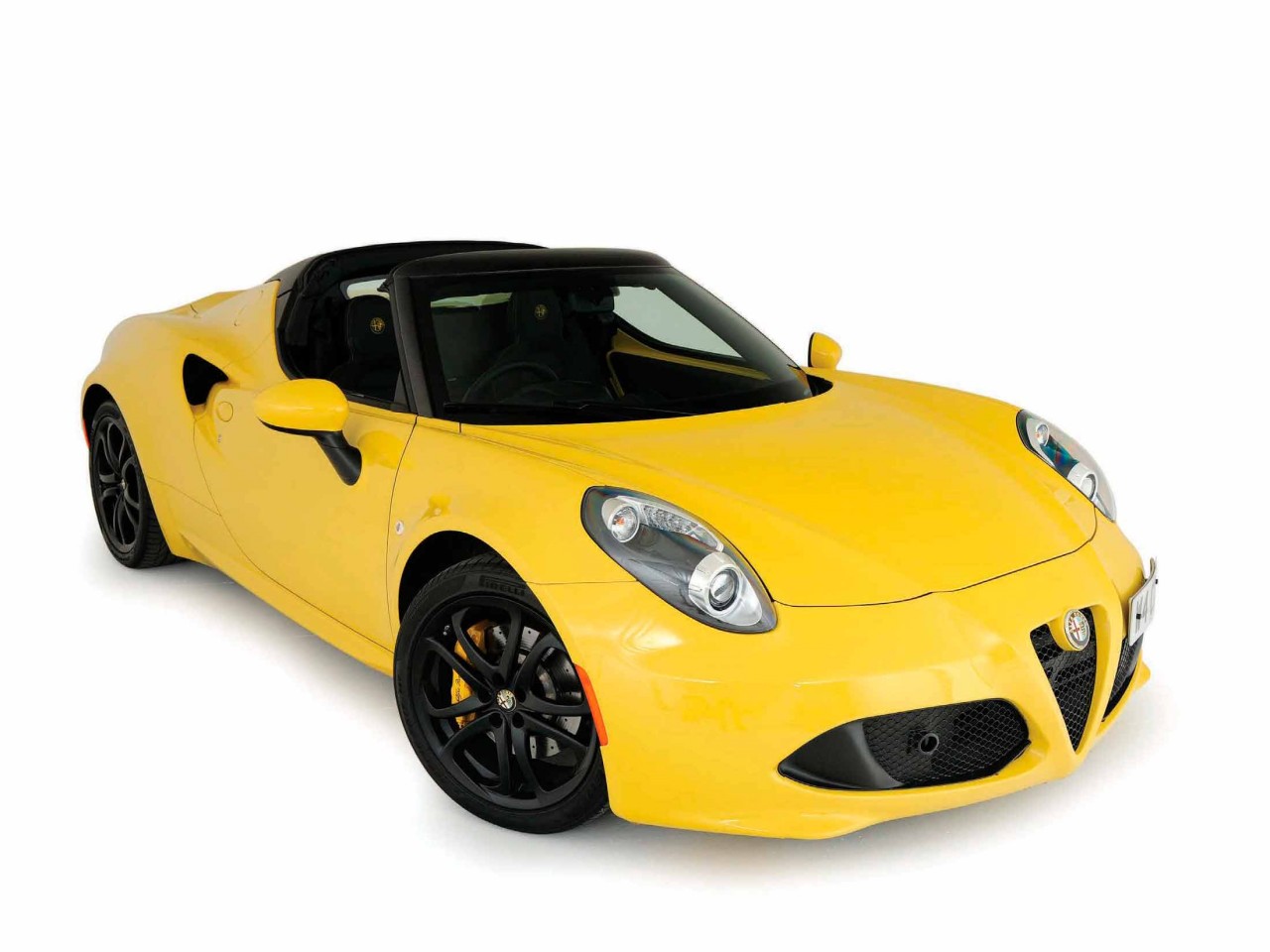 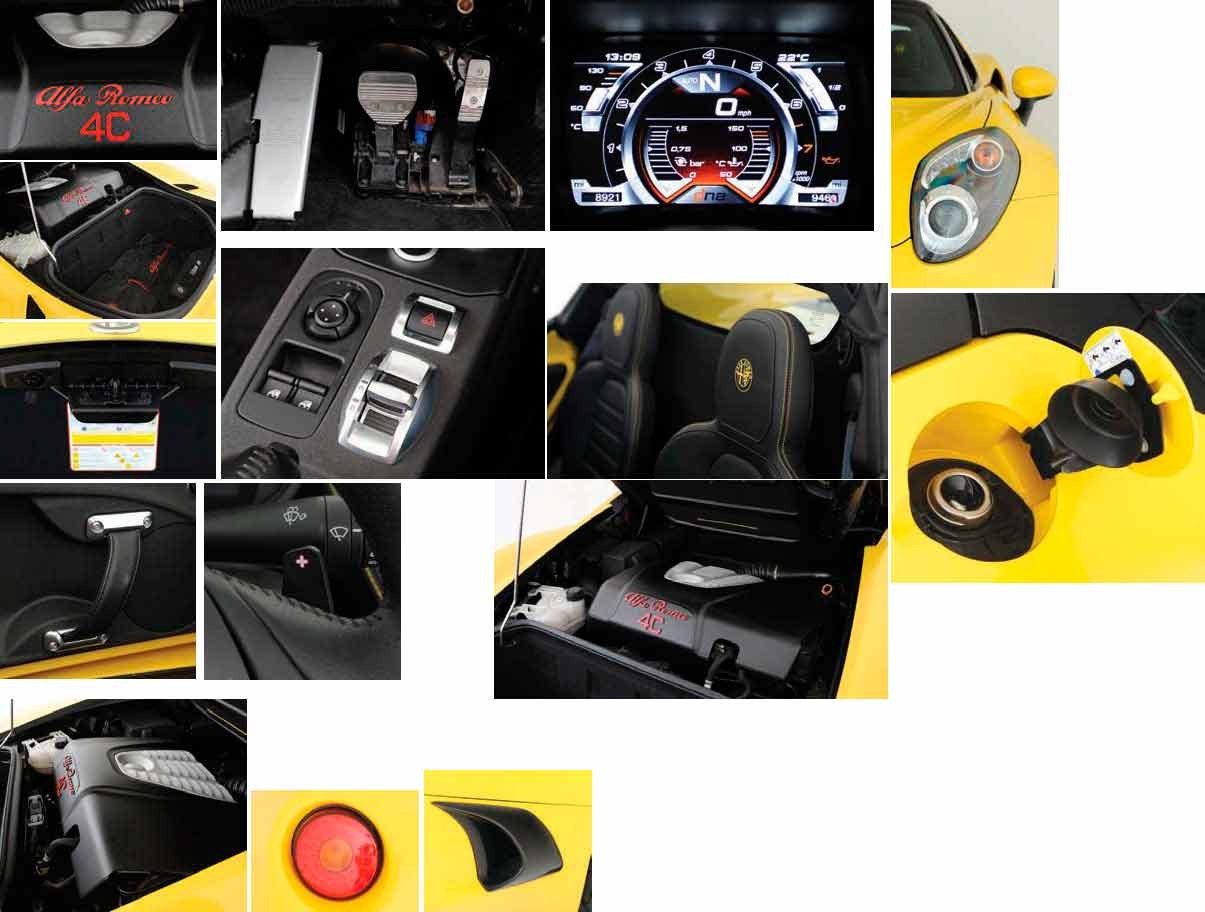 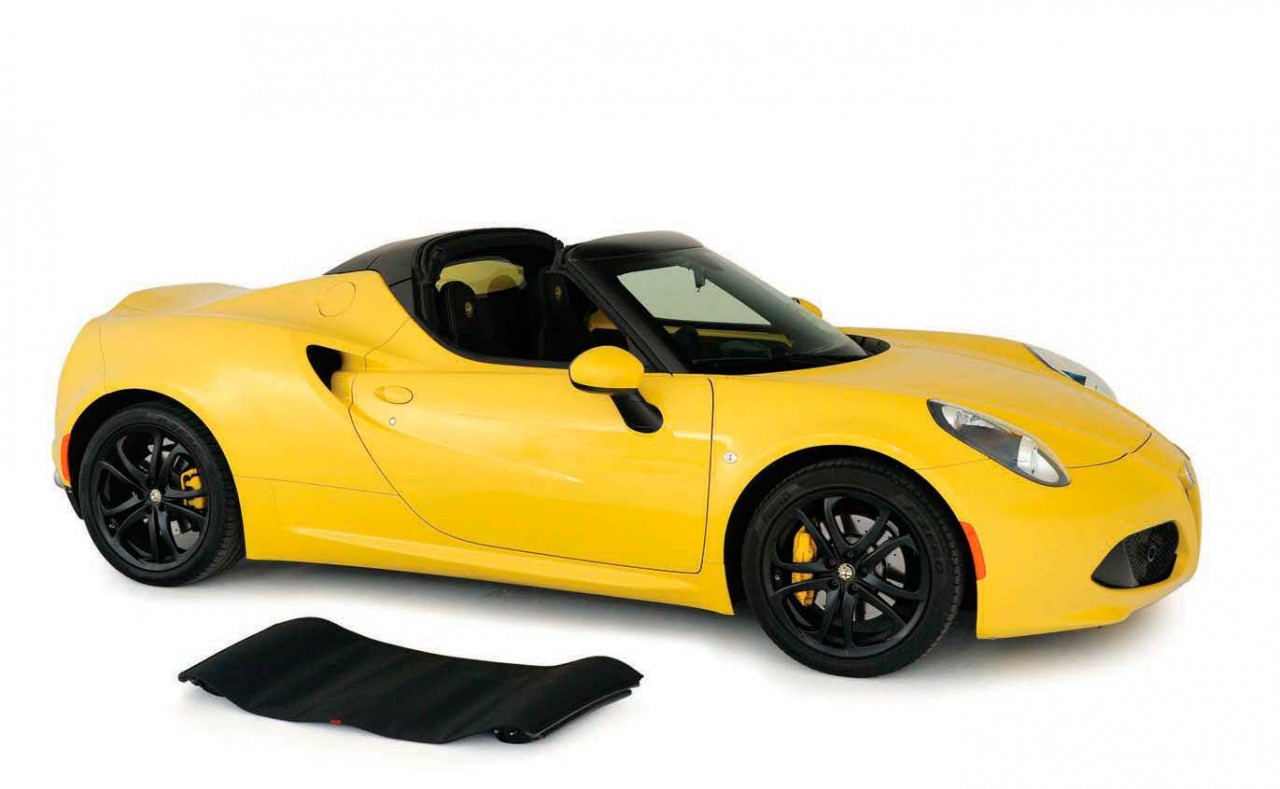 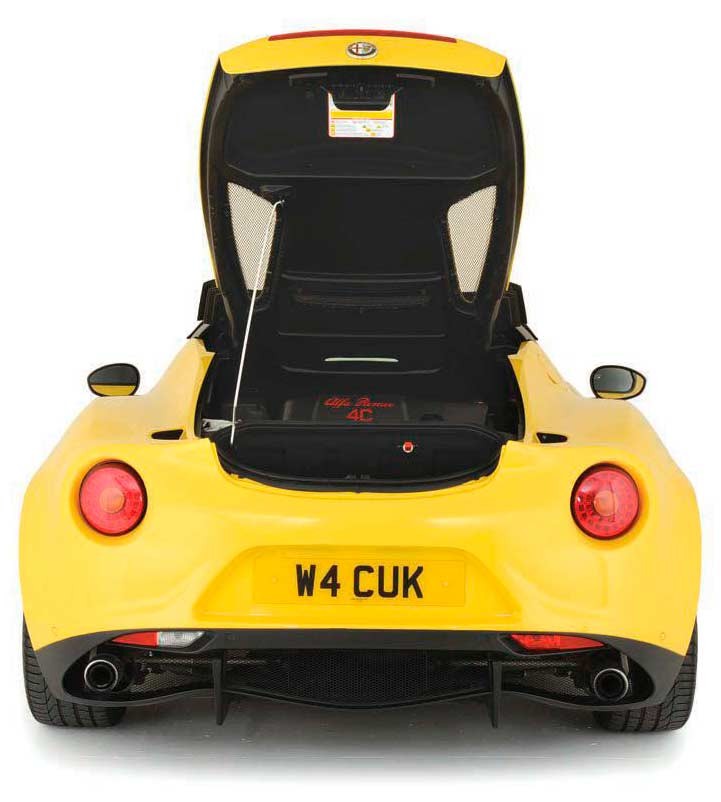 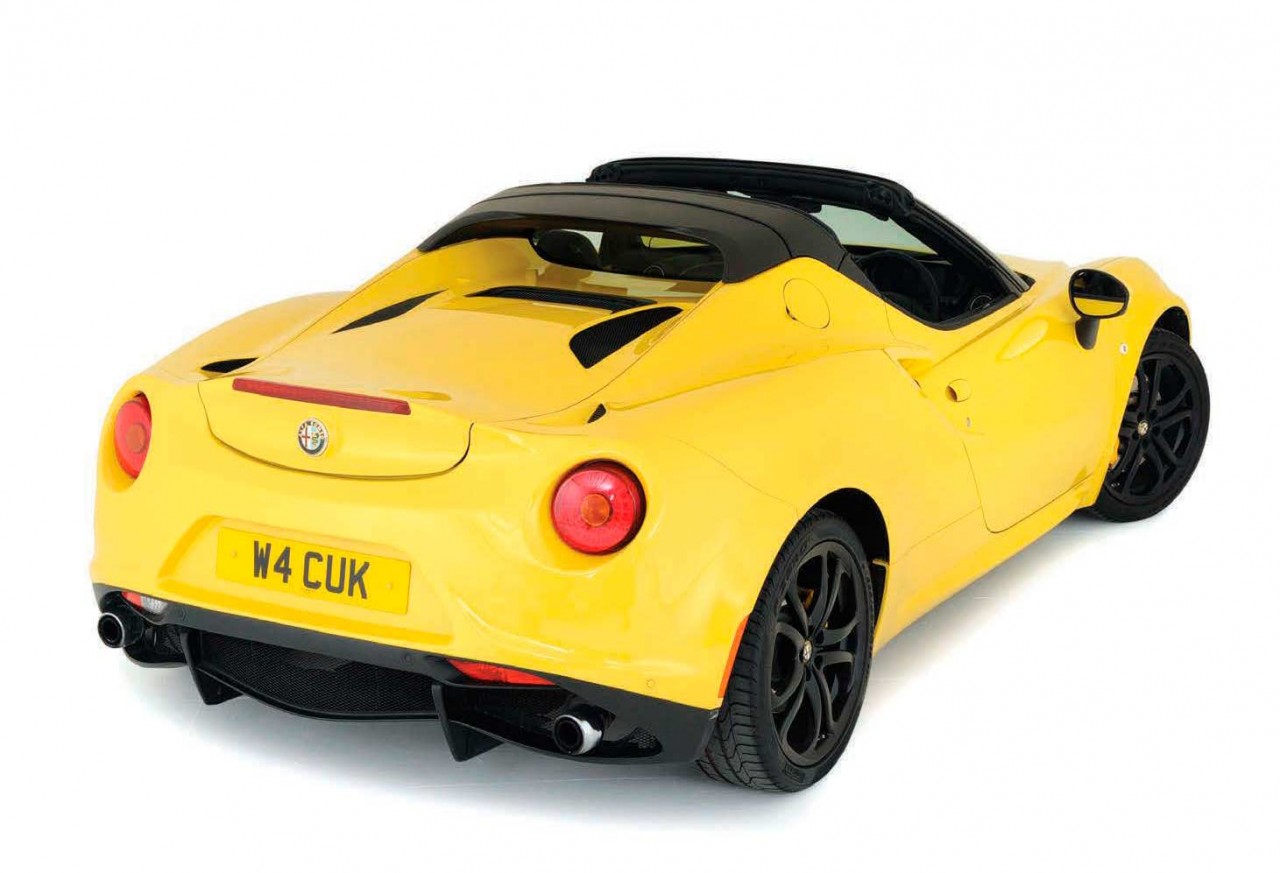 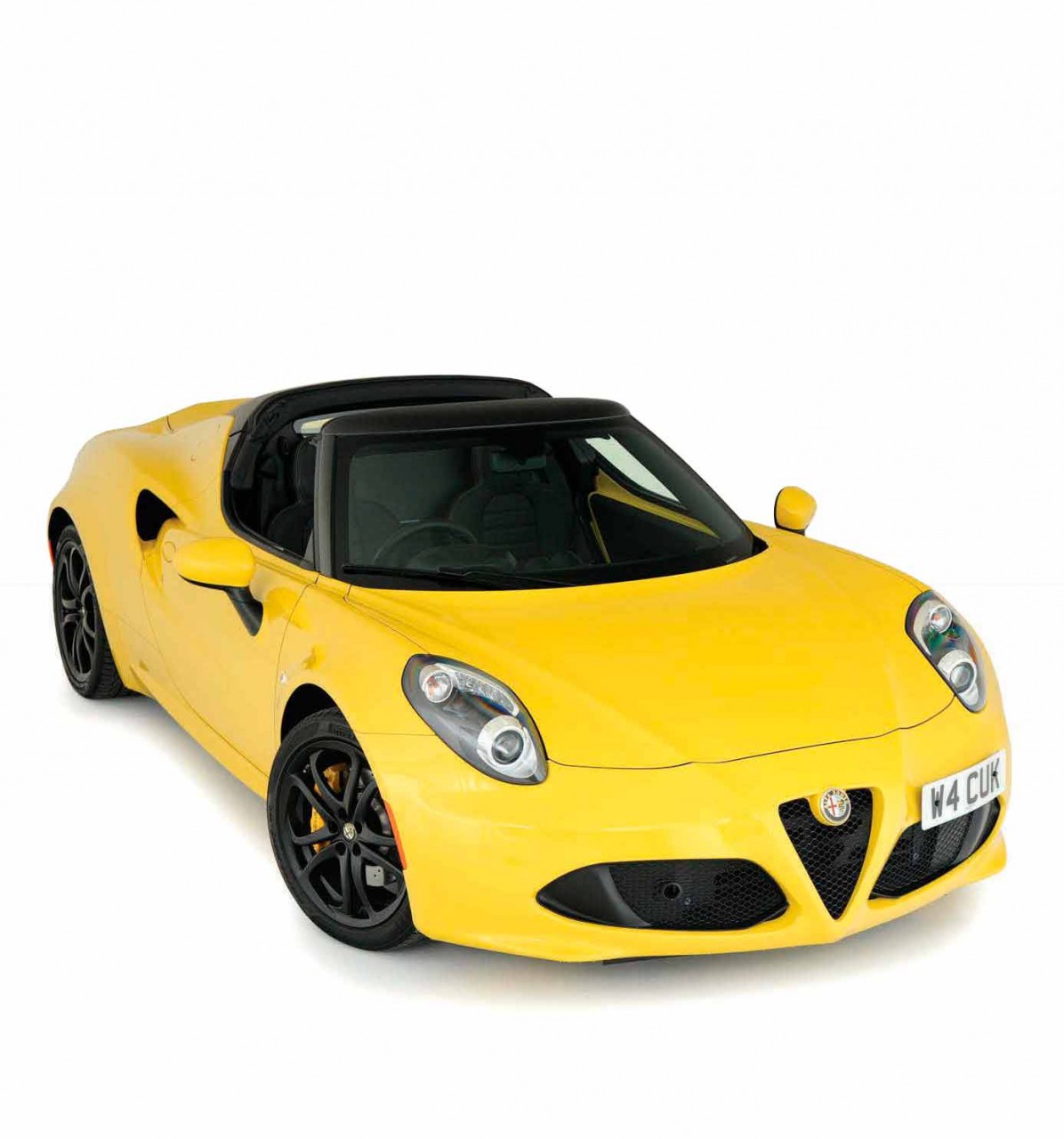 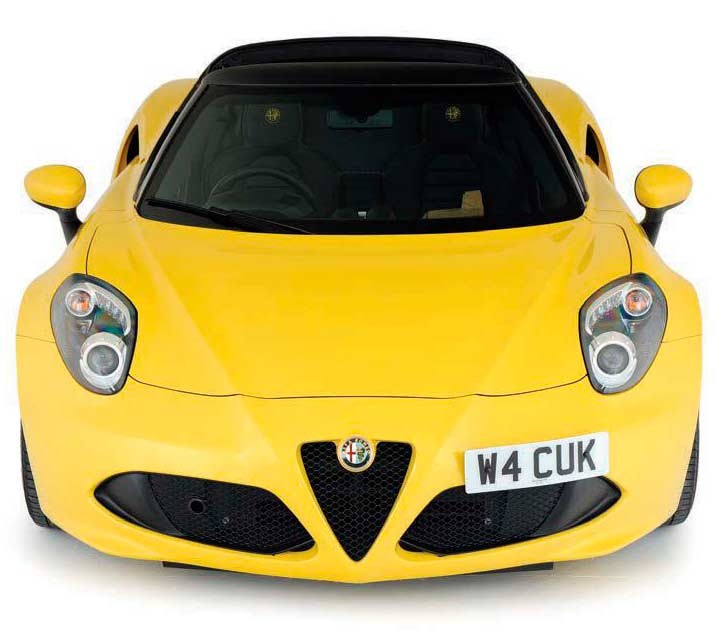 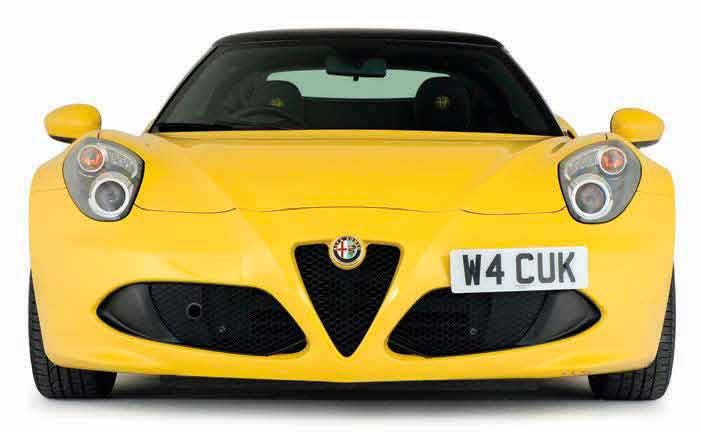 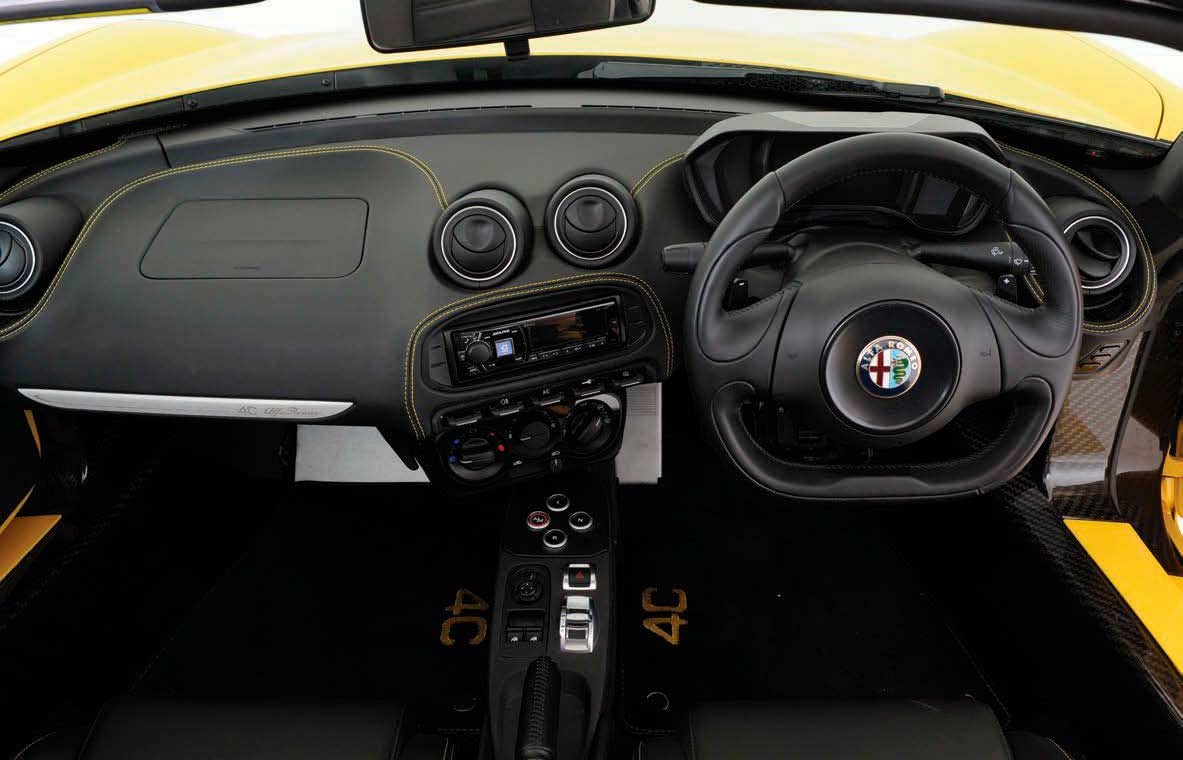