In a world of likes, comments and follows it’s easy to get caught up in the Internet of things, trapped in a mindset where online acceptance becomes the only thing that matters and the line between reality and façade is left dazed and confused by the wicked work of algorithms, influencers and clickbait. 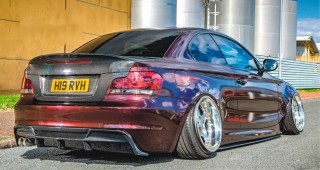 Of course, for all of the negativity surrounding the dark and evil ways of the digital age, car culture has never been more connected geographically via the Internet, which can only be a good thing. Social media is both a gift and a curse these days, but inspired by the US modified scene, this particular E82 project owes a lot to the power of the Internet and it’s hard to argue with the results.

This impressive 1 Series is the creation of Harvey Howe, a 21-year-old machine/ plant operator from Kings Lynn. “I have owned this car since I was 18,” explains Harvey, who stumbled across the car by accident. “I was actually on the lookout for an E92 but when I saw the E82 in person at the dealer I liked it a lot more than I expected to, and this one was a perfect condition approved used 120d with just 20k on the clock, so I bought it and haven’t regretted my decision one bit since.”

Harvey’s a big fan of cars with fitment/stance, but is keen to quash the assumption that ‘stanced’ cars are built purely just to look good, because in his case this car was built to be driven and enjoyed around the country, attending shows and meets. “I’ve had so much fun attending events around the UK in this”, he says, reflecting on four years with his E82. “My favourite memory was the time a group of us made the trip up to Scotland for the CleanFest show; we made it 800 miles without any issues whatsoever, but within five minutes of crossing the Scottish border I got pulled over and fined for my tinted plates, thankfully no issues with my tyres though!” he laughs. 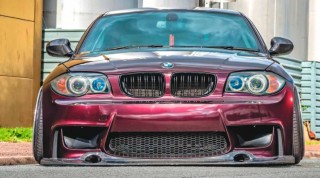 Like most car enthusiasts, Harvey has built his project bit-by-bit over a number of years but his first modification was in the suspension department, allowing the car to sit on the floor at the touch of a button. The brand on everyone’s lips when it comes to air suspension these days is Air Lift, so it should come as no surprise to hear that Harvey’s E82 wears their latest kit, which is a direct fit on the 1 Series chassis. “I didn’t originally plan to fit air, but a few of my mates made the jump from coilovers and I was impressed with how their cars handled, whilst also looking amazing, which prompted me to consider it for mine,” he says. “I justified it to myself because the car would sit on the floor but also be practical,” grins Harvey, telling us how his E82 plans snowballed, “and before I knew it, I had a brand new Air Lift Performance kit and 3P management on its way from the States.”

Next up were the wheels, which were an very important piece of the overall project for Harvey; “Wheel choice is one of the most important modifications you can make to any car and can literally make or break the final look. I had a vision in my head of exactly what I wanted and didn’t want to compromise,” he tells us.

“I didn’t originally plan to fit air, but a few of my mates made the jump from coilovers and I was impressed with how their cars handled, whilst also looking amazing, which prompted me to consider it for mine”

“I kept seeing amazing E82s over in the States on social media, so I challenged myself to bring that style to the UK. I love the aggression that wide wheels give a car and I wanted to push the boundaries and try something different with my wheels and fitment,” he says, having been very much influenced by the US stance scene. “In America, fully-polished/chrome wheels are a much more common sight than in the UK, so I thought it was time for someone over here to try it and I’m really happy with how it all turned out,” he smiles. Harvey’s original wheel setup was a set of BMW enthusiast-friendly three-piece Breytons but, having kept them for over a year, he decided it was time to change things up and his heart was set on Work Equip 05s, a hard as nails classic five-spoke design. These mirror-polished beauties in staggered fitment – built with gold hardware by Wheel Unique – are an impressive 10x18” up front and 11x18” at the rear, which is pretty damn wide by anyone’s standards, especially on a stock body E82. In order to squeeze them under his arches, Harvey needed to use a brutal combination of negative camber and seriously skinny rubber and the final outcome is nothing short of outrageous. With 215/25 tyres mounted on the front 10s and 225/35 on the rear 11s, this setup defies the laws of physics.

With the fitment exactly how he wanted it, it was time to turn his attentions to the body colour. “I had a whole load of carbon goodies on order and wanted to add some colour to contrast against the wheels and accentuate the body lines of the E82,” which was now wearing a 1M replica front bumper and custom side skirts/splitters. Truth be told, it’s impossible to talk about Harvey’s car without mentioning that colour, which works perfectly against the sculpted E82 and lacquered carbon weave. “It surprised people when I told them it was wrap, which is credit to the excellent work by Joe at Paint Killers – when I first revealed the car so many people assumed it was paint,” he says, recalling the moment he revealed this new look on Instagram ahead of the show season. The final hue is Black Rose by 3M, a rich dark red which adds a touch of luxury while looking very similar to BMW’s Mora metallic when the light catches it. Vehicle wrapping has come a very long way in a short space of time, both in terms of materials available and wrapping know-how and experience, which has seen wrapping specialists producing unbelievable results with vinyl and Harvey’s car is testament to that, with a fit and finish second to none.

When the aforementioned carbon fibre parts started to arrive, the project was all systems go with some very special lightweight additions soon to be fitted up. “I was excited to see how the carbon fibre would look against the new wrap,” explains Harvey, “I was over the moon with how the carbon parts (bonnet, boot lid, front splitter, mirrors, spoiler and rear diffuser) contrasted against the new wrap and I couldn’t wait to get out and enjoy the car”.

With the exterior looking suitably US-inspired, attentions turned to upgrading the interior, where Harvey would be spending a lot of time road-tripping to shows. Recaro is without doubt one of the must-have brands in automotive tuning and one seat model in particular caught Harvey’s eye when thoughts turned to making improvements to his interior. “I knew from the very start I wanted a pair of Recaro Pole Positions so it was just a case of waiting for the right set to come up for sale,” he says. “Fortunately, I found this set cheap on Facebook and was on my way to collect them the next day – my interior plans came together nicely.” Upgrading the seats alone was never going to cut it for Harvey, which is why he continued his new-found obsession for carbon fibre inside. “I love the way carbon weave catches the light and contrasts against the other materials and textures both inside and out,” he explains. “I also felt like the interior was a bit dull in stock form, so decided it was time to add real carbon fibre wherever I could, much like you would see on the M cars.” The carbon fibre is perfectly complemented by flashes of Alcantara trimming on the dash and centre console, which adds an extra element to the cabin, and the end result is a simple but effective interior with carefully thought-out additions.

“All in all, this latest look is an evolution over the course of four years, with massive help from my mates – it has been a real team effort,” says Harvey, and he is quite rightly proud of this build; “I just love the way it has turned out,” he grins.

While there’s no doubting the execution and quality of this E82, Harvey’s car is definitely much more than the sum of its parts. On paper, this is a relatively simple build with a modest list of modifications, but the outcome is pure aggression and it goes to show that out of the box thinking and a clever choice of parts are sometimes all you need to make a big impact. With its US inspiration and plenty of hard work, this is now one of the UK’s finest E82s.

THANKS A massive thank-you to both Jake and Jamie for playing a big part in the project, I honestly couldn’t have done it without either of them, Chrissy, owner of Unique Customs, for helping me out last year and keeping me motivated to keep pushing my car to be its best, Dan Taylor, owner of Wheel Unique, for being involved with me from the very start, he’s now built three sets of my wheels, Joe Addison, owner of Paint Killers, for once again doing an amazing job of wrapping my car, my parents for putting up with me and the lads working on the car most days, causing pure havoc on the driveway and for putting up with my mood swings when something wasn’t going right! 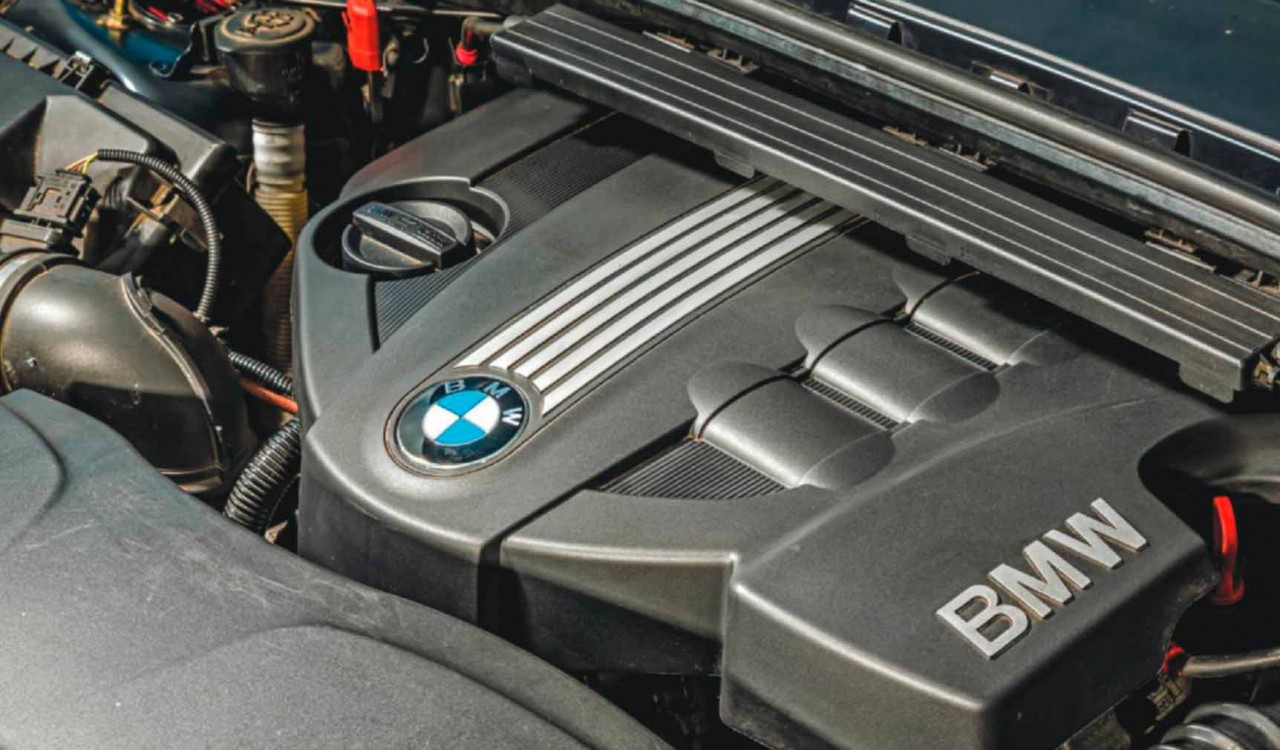 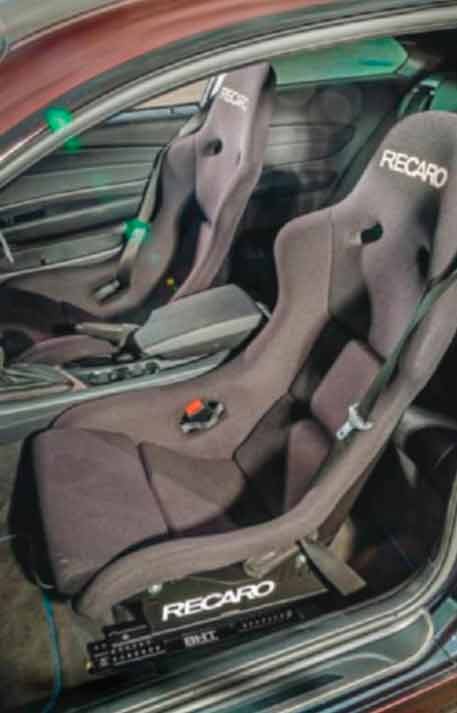 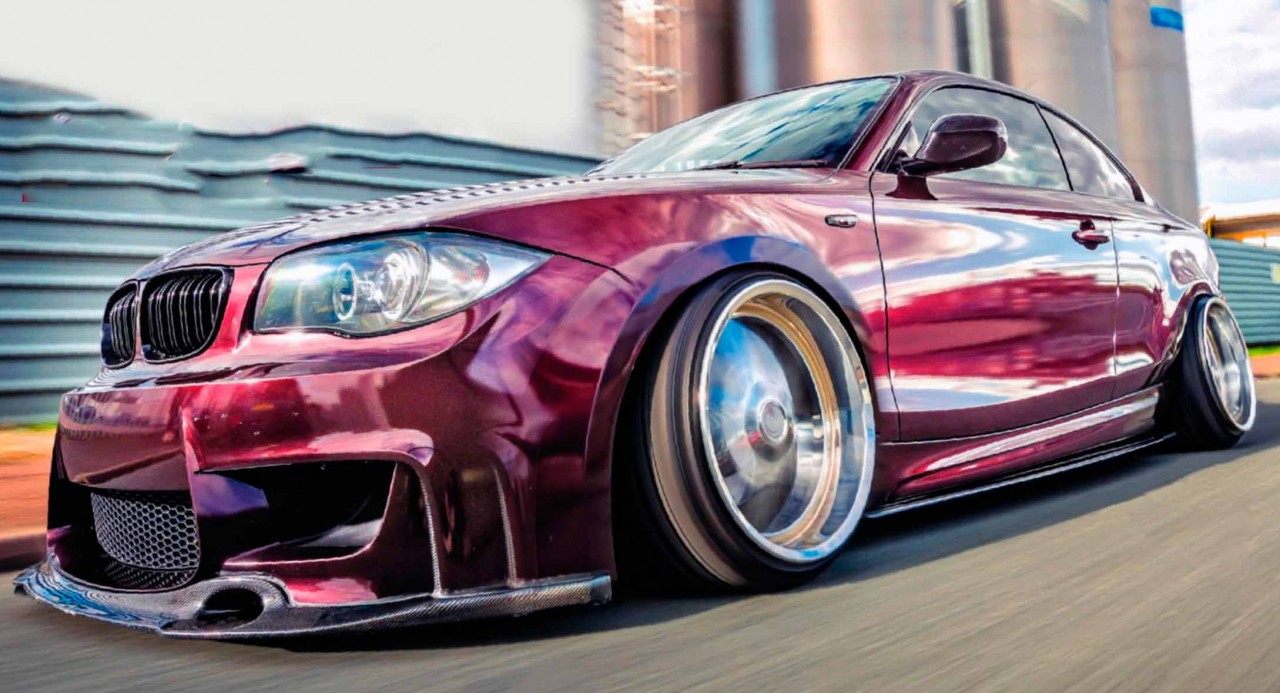 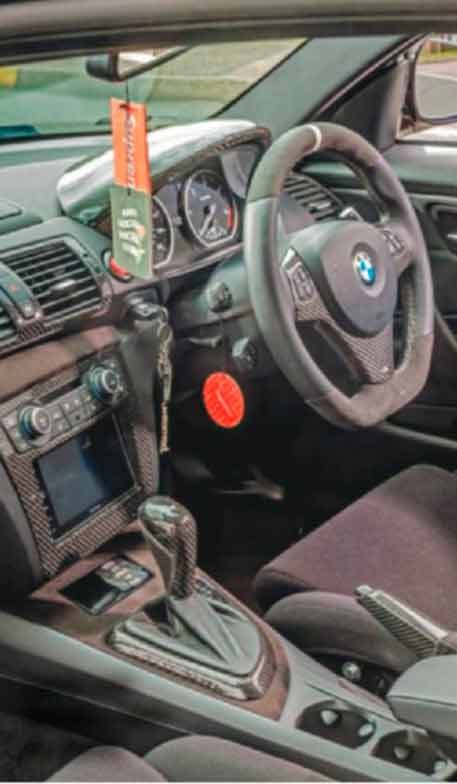 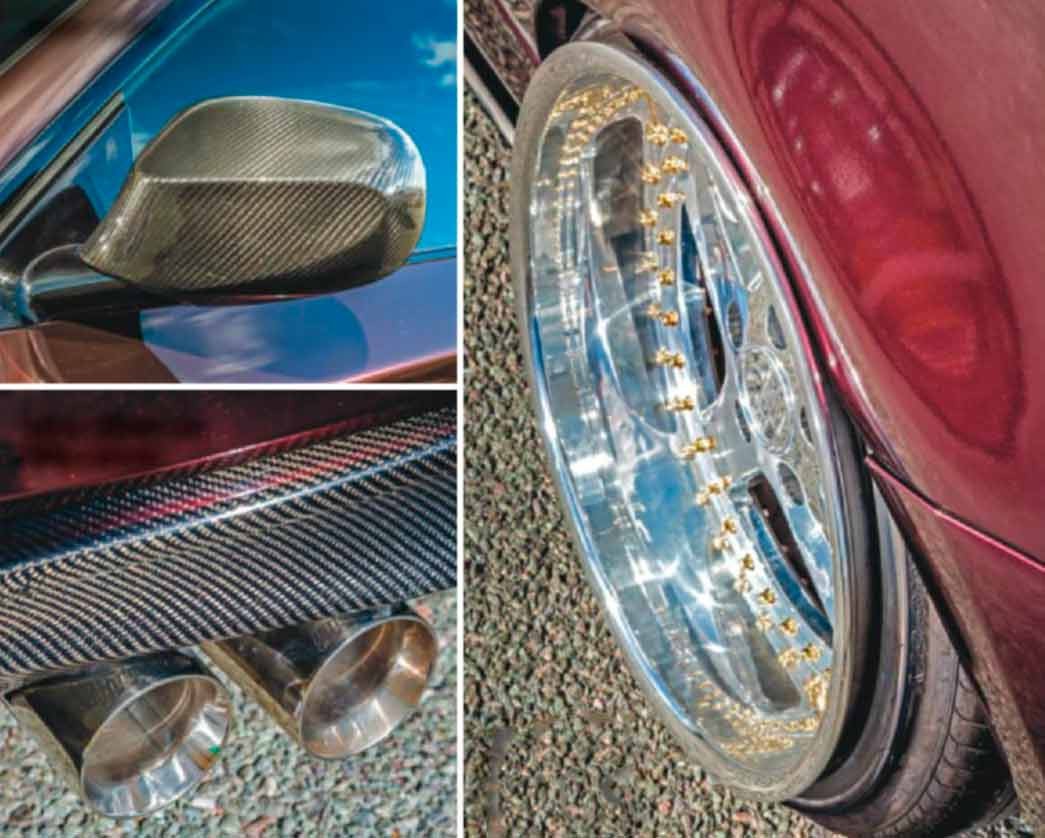 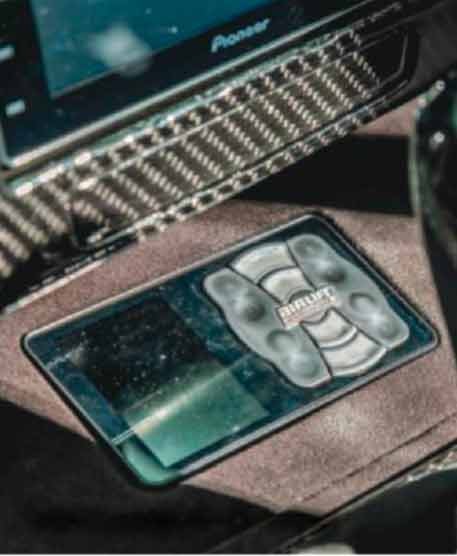 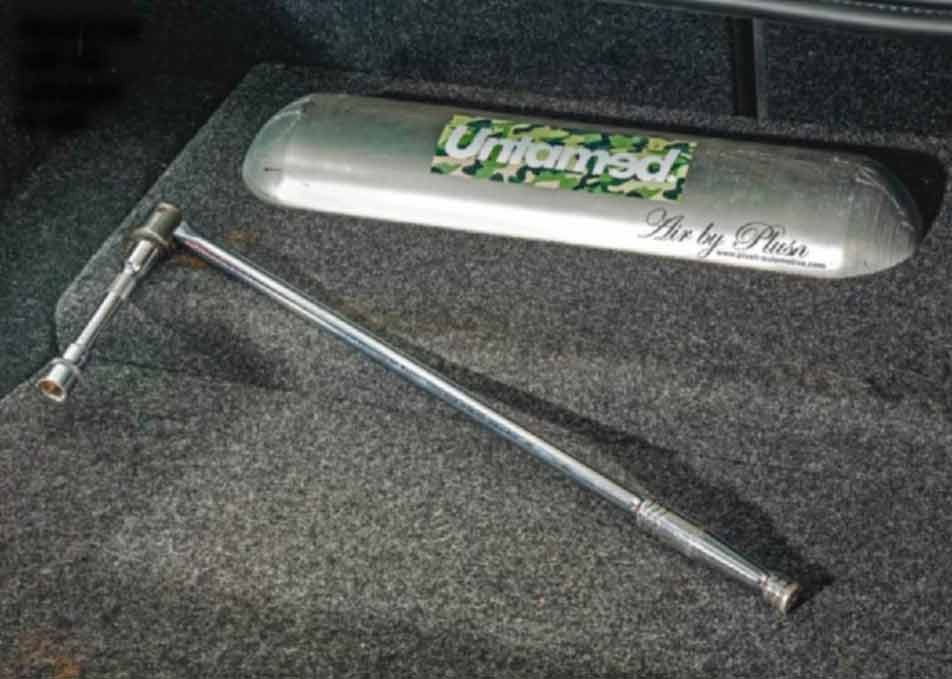