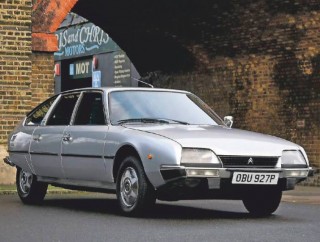 It may be expensive for the breed, but this handsome French spaceship is in super rot-free condition, says Paul Hardiman.

This early CX, complete with its ‘spaceship’ interior featuring revolving-drum instruments, was sourced from Italy and appears completely rot free. As well as perfect sills and floors, the front inner wings, strut tops and bulkhead are factory-crisp, and the front crossmember looks just out of its wrapper, still in a gloss brown finish.

The body is nearly as good. It’s straight and rust-free, including the door bottoms, showing only evidence of damage repair and refinishing around the right tail-light, and one or two tiny chips out of the paint. The stainless bumpers are good and their rubber facings are all intact and straight, as are the stainless sill finishers.

There are one or two dings in the minor chrome strips at the top of the doors, some of the matt-black accent paint has deserted the window trims and the right-front door waist trim is slightly bent, but that’s about it. Refinishing the wheels would improve the appearance – but their stainless trims are straight, even if they’ve lost a little paint. Tyres are well-treaded but quite old Michelin MXVs, half worn on the spare.

Inside, the seats’ blue velour is basically unworn, if a bit baggy in the rear, with one small stain, and the headlining is good. The dash plastics and door trims are fine, and the roller blinds are all present and correct.

The carpets are OK, with overmats, though might benefit from a clean. This Pallas has air-con, though it only blows cool-ish. The front electric windows work, and there’s an extra temperature gauge under the dash. The modern stereo is barely noticeable. The motor doesn’t sparkle, but there are no leaks and the oil is clean. The float sits reassuringly high in the LHM tank, and underneath the car there are no obvious hydraulic leaks, though in typical Citroën fashion it’s a little damp in places. The exhaust looks in good shape.

Even after standing for a while it starts easily enough, with a manual choke, and not tappety while it warms up and demists itself fairly speedily. The suspension rises within 20sec, operates through its full height range, and when you jump out, the body (correctly) leaps up a couple of inches, then settles back to normal ride height within a few seconds.

It’s very smooth and although it’s not fast it gets along perfectly adequately. There’s some play in the linkage to the four-speed gearbox, and although the odometer reads 71,303km there’s another in the boot reading 41k (plus a spare speedo cable, hydraulic pipes and spare side indicator repeaters and lenses), so we’re guessing the total is around 122k (76,000 miles). The brakes (on a conventional pedal) are sensitive but easy to modulate, and the steering is nicely weighted. There’s a little rumbling from the rear, but it might just be items rattling in the boot.

There was no paperwork to see, but it’s UK-registered and has an MoT until August. The superb structure and early details are attractive, though the slightly odd Italian spec (highest trim level, smallest engine) almost adds to its collector appeal.

6 From 1985, Series 2s get plastic bumpers, firmer suspension and conventional instruments. Turbo 2 from 1986.

Four-cylinder 2.0 is smooth if not particularly rapid. Idiosyncratic interior shows little wear. A life in Italy has helped this early CX to keep the corrosion at bay.

Citroen CX GTi Turbo is due a comeback