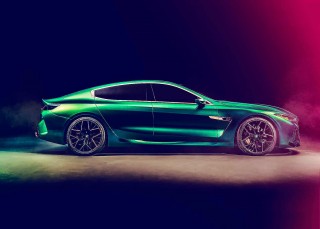 Bob Harper … is thoroughly bored by the current crop of hypercars. While I’d love to have seen the M8 Gran Coupé Concept in the flesh at the recent Geneva Motor Show, so much else about the exotica on display left me unmoved.

I know it was a couple of months ago now, but I just wanted to have a little talk about the Geneva Motor Show. It was the first time in years that I didn’t actually attend the event but, once the headlines from the show started filtering on to the interwebs, I came to the conclusion that I really wasn’t that bothered. Sure, I’d have loved to have seen the BMW M8 Gran Coupé Concept in the flesh but, overall, I was left somewhat cold by the offerings from the other major manufacturers.

Inevitably, there was a plethora of SUVs and the expected electrification of just about everything. But what I really struggled to get my head around was the raft of bonkers hypercars, and the fawning coverage they seem to garner from the motoring press. Come to think of it, even today’s crop of supercars seem to leave me cold. Am I simply getting old? Or is it a case that I should be handing in my car aficionado membership card as I head out of the door? More likely I think it’s simply a case that these machines are a complete and utter irrelevance to 99.995% of the population.

Bugatti brought along its new take on the already mad Chiron, the Chiron Sport. No more power – just the 1,479hp then – but ooooh, big news; it’s shaved 18kg from its two-tonne kerb weight. Like anyone’s going to notice.

Then there was Aston Martin’s Valkyrie AMR Pro, a track version of the already slightly absurd 1,100bhp Valkyrie. I’m sure it’s very clever and is packed full of technology… but how relevant is a run of 25, track-only billionaire’s playthings? It may well be capable of producing 1,000kg of downforce and generating over 3G when cornering, but I’m afraid I couldn’t be less excited.

What’s more, having seen the front-end of the company’s new V8 Vantage road car, my only conclusion is that a little more time and effort should have been lavished on its styling. I’m sure the new Vantage will drive very well, but its front air intake is bizarrely styled, and I can’t help but be reminded of General Melchett’s monster moustache, as sported by Steven Fry in Blackadder Goes Forth, every time I see it.

It wasn’t just Aston Martin and Bugatti, though, as McLaren is always keen to get in on the act of producing increasingly less relevant hypercars, too. At Geneva, it presented the Senna GTR… yup, you guessed it, a track-only version of the Senna that hasn’t even been delivered to any customers yet. It sports a measly 815bhp but, like the Aston, is also capable of generating a tonne of downforce thanks to the ugliest set of spoilers and splitters yet seen on a McLaren. Even if I did have a million quid to splurge on a car that I couldn’t drive on the road, I couldn’t bring myself to spend it on that one.

There were plenty of other niche manufacturers displaying equally insane machinery and, while it’s not a hypercar, I did have to have a bit of a chuckle at Land Rover’s latest SUV; a limited run (999 to be produced) two-door Range Rover SV Coupé. Perhaps it’s aimed at the billionaires who need to tow their track-focused hypercars to the circuit but, at £240,000, the old adage about a fool and their money being easily parted, was uppermost in my mind.