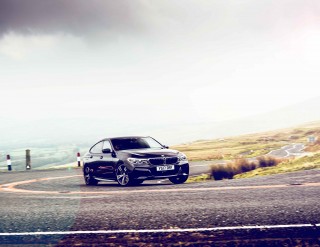 First Look Long-distance love affair. Matt Robinson wonders whether the long-range version of the 6 Series Gran Turismo can prove to be the golden ticket of the new line-up. Photos: BMW AG.

If BMW wants the new 6 Series Gran Turismo to do better in terms of sales than its predecessor, then it’ll likely be the 630d variant that holds the key to that success.

Currently, the company is expecting seven out of every 10 6s sold here in the UK to be the big-engined diesel model, despite the ongoing warnings about the impending, NOX emissions-related tax backlash against oil-burners. So, it could just be that the 630d provides the last glorious hurrah for big-capacity diesels.

That’s enough for a 0-62mph time of 6.1 seconds if fitted with rear-wheel drive as tested here (xDrive trims one-tenth off that run), with the usual limited top speed of 155mph, so there’s no doubting the performance potential of the 630d. What it also features, however, are by far and away the best eco-stats of the range, with official numbers of 55.3mpg and 135g/ km CO2.

Those figures mean that, theoretically, the 630d could go around 775 miles on one 66-litre tank of diesel, while the 640i would max out at around the 500-mile mark, even with careful driving. So, if any 6 Series Gran Turismo is going to truly live up to that GT epithet, then surely it’s the 630d.

Our test car was also particularly representative of the 6 GT breed, being an M Sport, which will take 90% of sales here in the UK. For a premium of £3,600 over the SE, the M Sport comes with 19in M bi-colour, double-spoke alloys, the full M body kit outside, an M Sport uprated braking system, stiffer and lower M Sport suspension, M-specific steering wheel, sports front seats, illuminated sill plates, pedals and floor mats inside and a panoramic sunroof up top.

For another £1,995, you can take that out to M Sport Plus, which chucks in the Harman Kardon high-level sound system, sun protection glass and a set of 20in wheels, for a little more opulence.

Nevertheless, there are still lots of options on this grand BMW. A number of tech bundles known as ‘Packages’ were fitted to our test car, pushing the price to an astronomical £71,145 on the road. The Rear-Seat Comfort Package (£2,995) speaks volumes about the fact that the 6 GT’s primary markets will be China and South Korea, where people prefer to be driven rather than to drive. It adds electric sun blinds for the side windows, electric rear-seat back adjustment, heating for the outer two chairs to complement the front seat warmers, some 12-volt power sockets and the BMW Professional Rear-Seat Entertainment with TV function.

But is £71,000 a lot of money for an oversized hatchback? Should buyers be paying £235 for Apple CarPlay on a car of this ilk, when most superminis these days have it as standard? Tough questions. Tough, also, to make a definitive call on the GT’s looks. There’s absolutely no doubt it’s a much more handsome car than its predecessor, having more proportionality and leanness to its shape thanks to its growth in length and reduction in height. Little aerodynamic touches learned from the BMW i programme, such as the active front air flaps, the Air Curtain, breather gills aft of the front wheels and a lift-reducing tailgate spoiler, see the 630d cleave through the air in a more efficient fashion than the lumpier 5 GT; the coefficient of drag decreasing from 0.29 on the old car to 0.25 here. So, it’s not only better to look at, but better on fuel and better at cutting out wind buffeting at speed.

With M Sport trimmings, in a dark colour and on large wheels (this sounds like I’m critiquing a Bangle-era BMW, doesn’t it?), the design works best of all, but it’d still be something of a push to call the 6 GT a pretty machine. However, there’s really nothing to complain about with the quality or spaciousness of the cabin, which is surely the car’s true USP.

To pack so much passenger space – be that in terms of leg- or headroom – into that swooping, coupé-like bodywork, and yet still have a simply gigantic boot on the back of the car, is a testament to the ingenuity of BMW’s packaging abilities. The 6 GT is a real triumph inside.

Within a few feet of moving off in the 630d, it’s immediately apparent that this is the pick of the range. The 3.0-litre diesel is such a peach of an engine; all immediate torque and a commensurate feeling of immense acceleration on only partial throttle openings. Rev it out and there’s a little more of a distinct thrum permeating the front bulkhead, but at no point would you call the motor coarse.

The eight-speed Steptronic transmission is also flawless, shifting imperceptibly between ratios when in full automatic mode, and yet providing crisp responses to clicks of the wheel-mounted paddle shifts, or the gear lever in its sequential side-gate when the 630d is being driven harder.

Where the BMW shows its luxury-orientated hand is in the configuration of its drive modes. Instead of Comfort, Sport and Sport Plus, the 630d GT employs Comfort Plus, Comfort and Sport. In the first of these three, the ride quality is simply exquisite, and we sampled the car as a driver, a front-seat passenger and while riding in the rear. In all of these seating positions, the longitudinal control of body movements and the lack of wind noise or tyre chatter, make the 6 GT a thoroughly relaxing place in which to spend time.

The problem is that it can never be the sharpest of BMWs, the handling losing something in terms of its sparkle at the limit. There’s an almost total lack of understeer, good bite on turn-in, strong brakes and informative steering in all modes, yet the 6 GT always feels just a bit too heavy to be properly hustled. Part of this is the feeling of lean, which is exacerbated by a driving position that is 60mm higher than that of a 5 Series Touring; the 630d seems to take a long time to settle on its outer springs when you enter a corner at an above-average speed.

But, again, as with the polishing of the exterior looks, there’s no doubt that the handling and road manners of the 6 Series GT are in advance of those of its predecessor. And, like the 640i xDrive, and as we’ve already touched upon here, it’s the sheer level of refinement that wins the day for the 630d.

As it wafts along on its all-corners air suspension, the lazy, genteel movements of its body isolating you from the worst of the multitudinous road imperfections outside, you keep rolling the words ‘Gran Turismo’ over and over in your mind, contemplating commanding the 630d across vast tracts of continental Europe in one smooth, comfortable trek. As a long-distance contrivance of the utmost excellence, the 630d GT is hard to fault.

It will remain something of an oddity in the UK, though, where we far prefer the conventionality of a 5 Series Touring. Nothing wrong with that, naturally, as the 5er wagon is such a stunning all-rounder. But, if you do decide to go for something a bit different, then the 630d GT won’t let you down. Sumptuousness seems to soak through to its very core and, for that reason, there’s no finer BMW in which to contemplate a long road trip. That’s ‘mission accomplished’, then, for the team behind the impressive 6 Series Gran Turismo.

While not the sharpest-handling BMW you can buy, the 630d GT compensates with quite superb refinement. This rear-wheel drive 630d GT will hit 62mph in a brisk 6.1 seconds yet offers decent fuel economy, too.

Top: This car is all about the interior, and you can spend an absolute fortune on extra equipment. This lavishly-equipped test car cost just over £71,000! Above: Rear seat passengers travel in the lap of luxury. There’s a Rear-Seat Comfort Package available, if you have an extra £2,995 burning a hole in your pocket.

The debate about the looks of this car is set to run and run. It’s not conventionally attractive, but does represent a step forward from the 5 GT.

As a long-distance contrivance of the utmost excellence, the 630d GT is hard to fault ... if any 6 Series Gran Turismo is going to truly live up to that GT epithet, then surely it’s the 630d