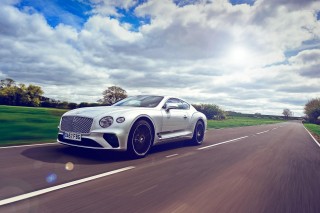 The arrival of Bentley’s all-new Continental GT in final production form has taken longer than initially planned. We had a couple of bites of a late prototype in the autumn of 2017, then nothing, until now. Thankfully, it’s been worth the wait. While Bentley is enjoying the uplift in production and sales from the Bentayga’s introduction, the GT remains an integral part of the firm’s strategy, hence the lengths gone to during the £156,700 model’s development. 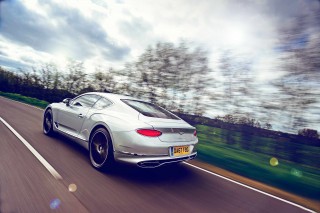 Porsche may have had responsibility for the new platform (it’s also used by the Panamera), but Bentley’s engineers were involved from the get-go and were integral in its development. It’s why the Panamera has a three-chamber air-suspension system, which is over the top for the Porsche but essential for Bentley in order for it to meet ride and handling requirements. And the way the new Continental works a road marks it out as head and shoulders above its predecessor.

While there’s a serene calmness to how the GT absorbs everything beneath its optional 22-inch wheels, it’s no longer to the detriment of its agility. Arrive at a corner and rather than pitching, rolling and being a bit unpredictable, it’s ditched the brogues for a pair of Todds.

It’s no 911, but the GT now has a poise and crispness to its chassis that lifts it far above being just a gentleman’s cruiser.

The rest of the new Conti is as expected in terms of fit and finish, quality and refinement – and speed. Because despite the car’s 2169kg kerb weight, the W12 motor – now with 626bhp – still has the guts to push you firmly back into the sumptuous chairs.

- That we’ve had to wait so long for it

Stuart PORSCHE Gallagher has not set their biography yet