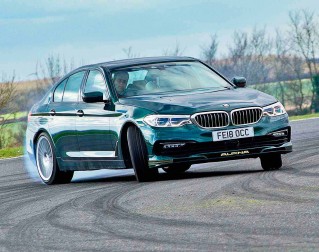 Does the world really need another 600bhp, four-wheel-drive BMW supersaloon? Time was when Alpina’s take on the Fast Five recipe used a different engine, and gearbox for that matter, and its character differentiation was blatantly obvious. Not any more. Look at the spec sheet of the new G30-based B5 and you’ll see the familiar 4.4-litre biturbo V8 engine, and an eight-speed ZF auto ’box as well. Those are the same core ingredients found in the new M5. 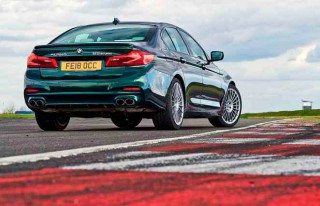 Yet the answer to the above-posed question is emphatically ‘yes’. It’s no coincidence that the B5’s tailpipes poke out discreetly from under the rear valance, unlike the M’s four bazookas; it speaks volumes about how these cars go about their respective tasks in life. However, don’t go thinking it illustrates a lack of firepower on the B5’s part, because at 600bhp and 590lb ft of torque it significantly betters its factory relation’s 592bhp and 553lb ft. Alpina goes its own way with engine development on the N63 lump, with a unique air intake and its own extensive cooling measures, the latter in part because Alpinas aren’t speed-limited like their factory counterparts. This one hits a thundering 205mph.

As for the chassis, Alpina fits its own front wishbones for increased negative camber, runs a bespoke set-up on Bilstein adaptive dampers and makes use of BMW’s Integral Active Steering and Dynamic Drive systems.

The 20-inch ‘Classic’ rims may have a familiar design, but they are now forged for a significant weight saving. They’re also shod with a bespoke Pirelli P Zero tyre – the first time the Italian manufacturer has featured on an Alpina since 1985 – and to go behind them there’s an optional (£1400) high-performance brake set-up, as fitted to our test car and comprising drilled metal discs and harder pads. 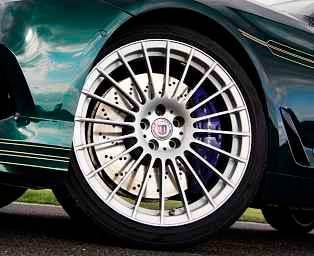 All of which is enticing, but the first thing that registers about the B5 is how subtle it looks, especially when you park it next to an M5. Without the carbonfibre roof, two-tone alloys and gaping vents of the M, the B needs an educated eye to differentiate it from an M Sport 540i. This is, of course, all part of its appeal, and something reinforced when you open the door and register the Alpina customisation. As ever with the products from Buchloe, if you’re prepared to pay for it, you can specify pretty much anything you like, but the leather on the steering wheel alone has a rich softness that has to be felt to be believed. It’s this reserved, deep-rooted quality, combined with extreme exclusivity, that attracts Alpina’s dedicated and well-heeled clientele. For them, one suspects a BMW M, or an AMG, is far too brash, too obvious.

For whatever reason, the BMW V8 has never got close to AMG’s ‘hot V’ engine when it comes to a soundtrack, yet while the B5 can’t match an Affalterbach car for volume or aggression, it has a deliciously creamy growl that’s entirely natural. The B5 builds on the brilliance of the G30 – its refinement across all areas – with an added feeling of luxurious consumption and utterly effortless power. Only a touch of throttle is required to surge from 30mph limit to 60mph cruise; a more committed yet still measured depression of the pedal is enough for a swift overtake. The ’box is predictably well behaved, but a switch into the car’s overall Sport setting and a knock of the lever across into manual mode gives more control, and also sharpens the whole experience, firming the damping and energising the engine’s responses.

As you might expect, the B5’s all-out shove is colossal, and moments where you can keep the throttle pinned for any amount of time are slim. But while turbo lag is non-existent, there is still a sense that basic physics requires the inertia of almost two tons to be overcome before acceleration can really begin. 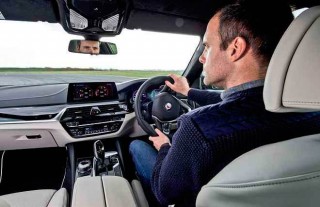 Dynamically, the difference between the B5 and its mainstream rivals is more apparent. The Alpina lacks the ability to disguise its weight like an E63 S or M5 in their more sportive settings, its rate of turn and the weighting at the wheel feeling more natural for a big car, but a little less aggressive. Traction is superb, and while there’s no everything-off drift mode, it will oversteer wildly given the space and commitment. Where it really excels is on fast A-roads, feeling so sure-footed in high-speed sweepers and with powerful brakes available on demand. Only the ride quality on poor urban surfaces mildly disappoints, with each of those giant wheels thumping through potholes. Ironically, a switch to Sport improves wheel control, even if the rebound is a little more abrupt, but it’s the M5 that adapts better to this particular challenge, not the more comfort-focused Alpina.

While the B5 might not offer the same driver appeal as an M5, its more reserved character, combined with massive performance and exclusivity, means it annexes its own territory against the odds. If nothing else, at £89,000 it’s the cheapest 200mph car on sale in the UK.

-  The price of exclusivity; low-speed ride on some surfaces