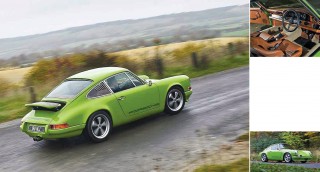 RPM Technik Porsche 911. Backdated and updated, this 964-based narrow-bodied 911 is one man’s vision made real - and it’s a cracking drive. Photography: Gus Gregory. The resurgence of restomodding, in particular of old 911s, has largely been driven by Singer Vehicle Design. The extraordinary creations from Rob Dickinson’s crew in California have transformed the perception of what many would once have considered a grubby hobby.

The appeal of Singer’s cars for many is the steroidal machismo imbued in the shape. They have a pumped-up look reflecting pumped- up performance. But what if you like the skinny-hipped appearance of an early 911 but desire the performance of a modern car? This conundrum, says Nick Fitch, informed his vision for the car he had custom-created for him, and which you see here.

'I’m lucky enough to have had a few 964s, and have always loved the narrow body and compactness of the shape,’ explains Nick. 'It’s something that you don’t see anymore with 911s.’

This, combined with a fastidious attention to detail born from a career in jewellery design, all fed into 911NJ. There are numerous visual modifications, but the truly exquisite, bespoke areas are the carbonfibre front and rear bumpers and roof panel, the heated front and rear windows and the custom rear grille. A 9112.7 RS bonnet and wings, louvred plastic rear side windows and Lume Technik LED headlights complete the look.

Nick’s vision was built by the Special Projects team at RPM Technik in Hertfordshire. RPM’s Ollie Preston reveals that ‘Nick gave us free rein on technical solutions providing we stayed within budget.’ A 964 was chosen as the base for Nick’s car because, says Ollie, the platform is a great fusion of old and new but retains a very analogue driving experience.

You take a step backwards when Nick’s car fires up, shocked by the engine’s feral, mechanical anger.

The motor is based around a 964 block, thoroughly overhauled and fitted with a lightened and balanced GT3 crankshaft, a 964RS clutch and flywheel, plus custom-made conrods, RSR-style headers and centre-exit twin tailpipes.

Impressive, if traditional, mods, right? Well, this 964 also has fly-by-wire throttle control and a ten-stage mapping system. You can dial up anything from 250bhp to a mighty 395bhp, with traction control and ABS assistance adjustable in stages, right down to fully off.

The cabin decor is expertly crafted, from the swathes of sweet-smelling aniline leather to the Alcantara headlining and the beautiful leather door-pulls. Details reveal themselves subtly, but then you can’t stop looking at them - the minimalistic dash face is a particular delight.

But none of this is worth anything unless the car drives well. Nick is tremendously generous with the keys and lets me spend a day on greasy roads exploring the car. I’ve driven a few fast 911s, but Nick’s is rampant. Surprisingly, it contains the pace extremely well-the variable traction control is particularly effective and allows you to graduate from one performance level to the next.

From a handling perspective, there’s no real pitch or roll, no sudden weighting-up from the non-assisted steering – a common problem with poorly setup and lowered 911s. Underneath, there is a hybrid set of parts that conspires to keep the car in check, including 993RS uprights, GT2 Evo track-control arms and custom Ohlins suspension.

The grip-to-power ratio is pretty much spot-on, and you never feel as if the car is on a knife-edge. Despite the extrovert looks and machine-gun noises from the exhaust, there’s an appealing civility about Nick’s car. In short, it’s a mesmerising machine.

And one with a tale to tell. Nearing the end of the build on a shakedown drive, disaster struck when Nick crashed the car. It was badly damaged-enough to warrant a full respray - so the paint was changed from Ivory to Chartreuse Green, a colour Nick thinks better reflects the car’s character.

‘Despite the machine-gun noises there’s an appealing civility’

- This kind of bespoke quality comes at a high price