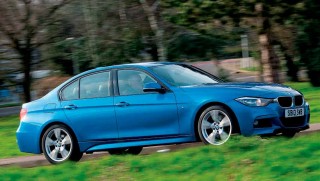 Looking for a contemporary BMW where the best of the analogue and digital worlds collide? Enter the F30 328i, potentially one of the firm’s best all-rounders – despite lacking a straight-six... Words: Mark Brockman. Photography: Jason Dodd.

How much BMW do you really need? Or, rather, how much car do you really want? It’s rare that these two questions can be asked and garner the same answer, but if you think about it long and hard – removing all of your automotive pipe dreams from the equation – you might just come up with the F30 328i as your answer. As car manufacturers further pursue electrification, the invention of yet slicker automatic gearboxes and increased environmentally friendly production methods and the creation of carbon neutral vehicles, the time of honest, competent and involving motoring is nearing its expiration.

Like the hybrid era of Formula 1, it seems that in future we will be treated to cars that are almost certainly faster, bigger, heavier and lacking in drama but that are also easier to drive. In this era of ‘plug-and-play’ motoring and little nuance, we might also be subjected to diminishing automotive charisma. Only a few years ago, however, things were very different. In that period of time one could freely buy a car with a manual gearbox, a hulking, naturally aspirated heart, and an exhaust note that was not falsified nor ‘autotuned’ through a stereo system. It was an experience that felt connected and visceral. In 2012 BMW rather superbly bridged the gap between old and new with the F30 328i.

It was modern and yet somehow orthodox, too. Traditional, but somehow sophisticated. With a twin-scroll, 2-litre in-line 4-cylinder engine, this variant of 328i was a zenith of small-capacity, big performance motoring. It delivered to us a preview into what could be achieved when a team of expert engineers put down their coffee and biscuits and thought strategically about the future, while also staying true to BMW’s time-honoured premise of creating the Ultimate Driving Machine. The previous E46 iteration of 328i was rightly lauded for its creamy 2.8-litre straight-six, an ‘all things to all men’ deportment. Of all the legendary models that the E46 spawned, the 328i held its place on the rostrum despite being not nearly as famous or desired as its M-car brethren.

The F30 version of 328i played the same party piece as its forebear. Zero to 60mph was dispatched in a smidge over six-seconds, a combined cycle of 44mpg was also impressive. With a taste of BMW’s Motorsport Division minus the premium price point, this was a car for every occasion. And, unsurprisingly, that is why it is the subject of this very feature.

In striking M Sport specification and resplendent in Estoril Blue, the 2014 F30 328i you see here has traveled 45,000-miles, and according to its owner it has not skipped a beat in that time. As good as the 8-speed ZF gearbox is, it’s pleasing (and rare) to find that this example boasts the 6-speed manual transmission. Slotting into the driver’s seat and settling in, the patented BMW bolsters keep your body firmly in place. As you’d expect the ergonomics are on point, time-honoured, there is perfect adjustment of the driving position to suit your tastes, the driver can sit low into the chassis with the steering wheel at a proximity that Steve Soper would adore. There is, of course, a slight off-setting of the pedals as is the case in all right-hand drive BMWs, but to critique this would be nit-picking what is a terrifically pleasant and focused place to sit.

Out on Kent’s back roads the 6-speed manual gearbox here is rifle-bolt slick, on this particular car it feels like it’s only just warming-up in what is, at 45,000-miles, realistically, its midlife. Certainly boasting a smoother action when the fluids are at optimum temperature than say, a manual M135i – which some find a touch notchy, it is a satisfying affair with only a slightly long throw being my only criticism. Even without adaptive dampers, this particular car flows nicely between the bends, soaking-up any undulations and pockmarking in assured fashion. Happily, there is very little turbo lag to be detected, the 328i F30 responding promptly to throttle blips and heel-and-toe downshifts. This is a family vehicle but a sportscar, too. And then, of course, there’s the delicious chassis. Tactile, friendly and alacritous, you can place the car on the road with absolute precision, clipping any apexes even when you’re not truly giving them your fullest consideration. The 2.0-litre straight-4 under the bonnet is ballsy and in many respects punching above its weight. The unit puts out 241hp and 258ft/lb of creamy, linear, torque – it’s this which enables the car to feel every inch the sports saloon, yet one that can be enjoyed on a daily basis. What’s great is that there is just the right amount of latent performance that can be exploited on special occasions when you stumble upon that deserted B-road begging you to tickle its generous berries...

It wouldn’t surprise if the horsepower and torque figures stated by BMW are conservative estimates at best, because this car gives the sensation of being really rather quick. Certainly brisk enough for most British roads, you can barrel into corners faster than you might anticipate, but right there, near the top of the pedal, is the immediate bite of powerful 340mm front brake discs. In fact, the brakes are almost a touch sensitive at social speeds, and this is where you get further impression that the F30 328i wouldn’t be an incongruous sight at a track day. Slamming on its anchors at the 100-metre board, pitching its neutral chassis into a turn and burrowing its Continental tyres into the asphalt in order to catapult you out of the other side. As you can tell, I can imagine it well.

Now entering its seventh year, there is barely a murmur or creak inside this car from dashboard nor trim, the leather is noteworthy too for being in pristine condition. Illustrating that this is no one-off occurrence, a quick online search for reliability reports on the popular BMW forums reveals an encouraging picture for those thinking of investing in any F30 model as a second-hand buy. Several examples that we find look close to immaculate with just the usual wear for models showing between 50-100,000-miles. It seems that current F30 328i M Sport owners are looking to keep their cars longterm, way beyond PCP or PCH agreements, many seeing these models as potential future classic. And, when you consider the position of these cars in the overall BMW hierarchy, existing on the cusp of the analogue automotive world meeting the digital one, it’s somewhat hard to disagree. With the prognostication of a very different future for those of us who love driving, we’re right to be fearful that there may be a time, if it hasn’t arrived already, where memories of the intrinsic BMW driving experience are muddied by the firm’s inexorable quest for progress. In the meantime, there’s the F30 328i...

M Sport touches make this a nice proposition both inside and out...

The F30’s interior is wearing well, this example has covered 45,000-miles but there’s no sign of aging... Practical and fun to drive, though this iteration of 328i is missing the six-cylinders of its forebear, it remains an interesting prospect...

This variant of 328i was a zenith of small-capacity, big performance motoring...