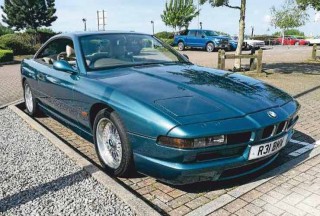 Why did you choose the car?

I’ve owned BMWs since 1992 – mostly 7-Series but I'd wanted an 8 since they were released. I test-drove one about 15 years ago but it wasn’t a good example so I walked away. Then in 2016 we decided to get rid of our Volvo XC90 and I managed to persuade my wife that a part exchange for the 8 was a good idea. It’s lucky she's a petrolhead too. It needed quite a lot of work to get it back to how it looks now but it was worth it and it’s now overtaken the 7-Series as my daily runner.

Probably the engine – the V8 power is so smooth and the noise is addictive. The whole car could be judged as the best bit but it sounds so good we’ve nicknamed it Merlin after the Spitfire engine. Plus it’s got pop-up headlights. Who can resist pop-up headlights?

I couldn’t drive it for almost five months because it was in the garage after nearly catching fire. We were out on a club run and smoke started coming from under the dashboard, the lights popped up and the wipers and washers began working of their own accord. Then the engine died and with smoke coming out of the bonnet I got out and quickly disconnected both batteries and called the AA. The wiring loom had melted under the fusebox. It was a mammoth job for our mechanic.

I’ve renewed everything under the car, but the main mods are the brakes. I now have drilled and grooved discs all round with ceramic pads on the front and braided pipes underneath. I have also uprated the exhaust to stainless with 2½in pipes, free-flow sports cats, new centre and back boxes and 3½in tips.

Most parts are readily available through BMW, online auction sites... or from my donor car.