Lamborghini’s new SUV made its UK dynamic debut at the 2018 Goodwood Festival of Speed – with us at the helm tanking it up the hill. So is the Urus a proper rampaging bull or a cow-like beast of burden? It’s time to find out. Words: Chris Rees.

Oh no, it’s happening again. The last time I drove a car up the hill at the Goodwood Festival of Speed, it started to rain just as I made my way to the start line. Back then, I was in a priceless works Fiat 124 Abarth rally car with rear-wheel drive and antique tyres.

Today, as I pull up to the famous Indianapolis brick start line, it’s just started to rain again – but what I’m driving could hardly be more different to the 124 Abarth. It’s a Lamborghini, but very much not as we know it. The prospect of taking an as-we-know-it mid-engined 600hp-plus rear-wheel drive Lambo up a wet Goodwood certainly has its terrors. But in the new Urus – four-wheel drive and tyred up to the gunnels – I suspect I may have the perfect companion for a rapid assault up the hill.

And it will be rapid. How could it not be, with 650hp at our disposal? That makes the Urus – or so claims Lamborghini – the world’s fastest SUV. It’s also the first ever Lambo with a turbocharged engine.


But let’s back-track to the paddock for a moment, and my first sighting of the Urus in the flesh. Fashion lovers look away now, because I’ve worn yellow trousers especially for this encounter, knowing that the Urus is available in searingly bright ‘Giallo Auge’. Bingo – the demo car is as yellow as they come.

It looks enormous – and it is enormous. Even by super-SUV standards, this is an XXL machine. Some of my colleagues haven’t been terribly complimentary about the way it looks but in the metal (aluminium, mostly) it looks a lot squatter than most SUVs.

Design cues span from LM002-style air outlets ahead of the doors to Countach-inspired windows (apparently). And as for the rear door handles nestling on the bulging wheelarches, surely no other car has such an unusual quirk.

Climbing up into the driver’s seat – and how often do you ever go ‘up’ into a Lambo? – you’re confronted by a plush, enveloping dashboard that looks like nothing else. Hexagonal design theme apart, though, it doesn’t really feel like a Lamborghini, being very upright and dominated by a big touchscreen. You actually sit quite low by SUV standards and there’s loads of space inside.

Press the engine-start button and the 4.0-litre V8 twin-turbo rumbles to life. Lambo has gone the turbo route for the first time ever in its history so that it offers the torque it needs for low-rev off-roading. But I’m not here to do that – hopefully I’ll be keeping it on the tarmac.

I’m going to leave the transmission in auto mode, I decide. The eight-speed automatic has very short low gear ratios to boost acceleration off the line. As the starter’s flag falls, I release the brake pedal and floor the throttle. There’s a little hesitation as the Urus works out surface grip levels. Then it’s off, with a capital ‘O’, like a chemically enhanced lemon sherbet rocket. Lamborghini quotes a 0-62mph acceleration time of 3.6 seconds, 0-124mph in 12.8 seconds and a top speed of 189mph, making it the fastest SUV on the planet. And boy, is it fast: quick enough to feel like it might go extra-terrestrial, in fact, and certainly pacy enough to justify its raging bull badge. The gearbox changes up relatively smoothly at peak power points; a monstrous 650hp is available at 6000rpm but peak torque arrives at just 2250rpm.

I’ve switched to ‘Corsa’ mode for the run, as it provides the best exhaust note for everyone to enjoy (including the driver, although some of the cabin sound is artificially piped). Despite the adoption of turbos for the first time, the promise of an “inimitable Lamborghini sound” is fully realised: this is no V10, admittedly, but there’s a heady mix of very loud bass at low speeds and a cracklingly intense exhaust note as your revs rise.

Corsa mode also lowers the ride height, keeps body roll down and also has the least degree of driver assistance, so considerable concentration is going to be required as I approach the first corner, a fast right-hander. I needn’t have worried: already the steering is feeling chunky and confidence-inspiring, if not entirely natural, and the four-wheel steering system is making the turn-in way sharper than I was expecting.

In full flow, tanking it down the main straight past the house, I’m reminded that there’s a sodding great hay bale chicane just after the bridge. Might be a good moment to brake. Fearing I may have left it a little late, I hoof the pedal hard – very hard – and the hulking carbon ceramic brakes and 10-piston front /six-piston rear callipers haul the Urus up with surprising ease. Sufficiently slowed down to make Molecomb corner for a slow-in, fast-out approach, the Urus is feeling great, despite the damp track. Up to the stone wall and it’s starting to feel invincible. The 4x4 system has active torque vectoring, adaptive air suspension and active roll stabilisation, all helping the sense of this feeling like a much, much smaller car.

After the blind right-hander, you have a long, sweeping left which can be taken pretty much flat-out in the Urus. It’s very impressive around here. Yes, there is body lean but far less than you’d expect of an SUV, let alone one weighing 2.2 tonnes. The position of the engine keeps the car’s centre of gravity low, while the wheels (huge at 22 inches but not the biggest on offer – they go up to 23in) offer grip aplenty.

The Urus name derives from a Spanish word for an ancient ancestor of domestic cattle. In some ways, the Urus is a beast of burden – five-seat family car with loads of luggage room – but up the hill at Goodwood, this Lambo feels very far from domesticated. In its own way, it’s every inch a raging bull.

Previously I’ve voted the Alfa Romeo Stelvio Quadrifoglio as the sportiest SUV on the planet. Now there’s no question that we have a new winner on that score.

I can see that the Urus is going to sell like hot cakes. Priced from $165,000 in the UK, it’s now Lamborghini’s entry-level model but also the one with the broadest appeal. Add in the fact that it’s also the easiest Lambo to drive and its appeal will extend to all sorts of new customers. Never thought I’d say this, but Lamborghini’s SUV is actually really rather good.

With ‘Corsa’ mode engaged, the noise is something special. 4x4 guarantees surefootedness, even on a damp Goodwood hill. 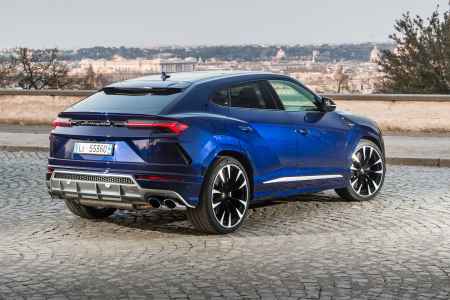 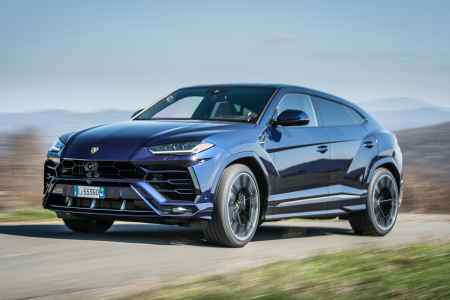 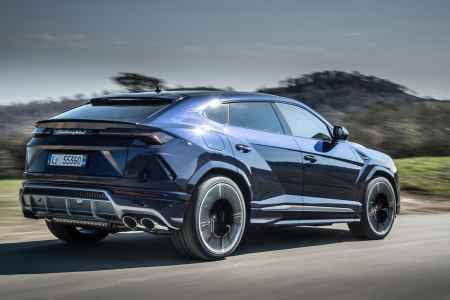 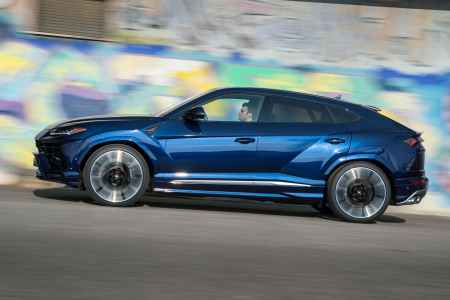 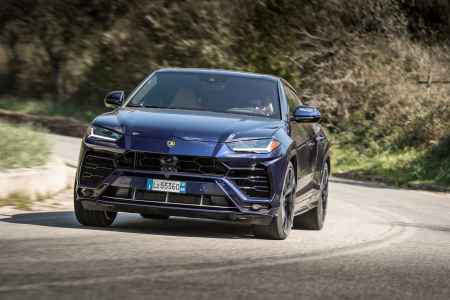 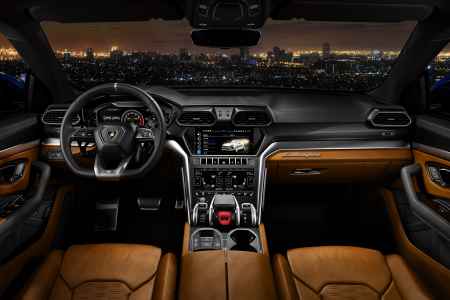 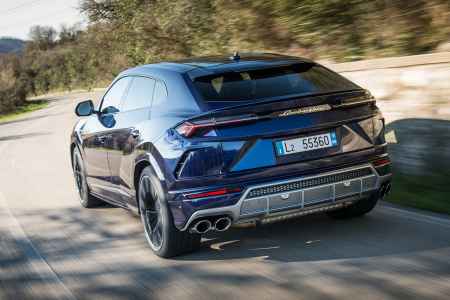 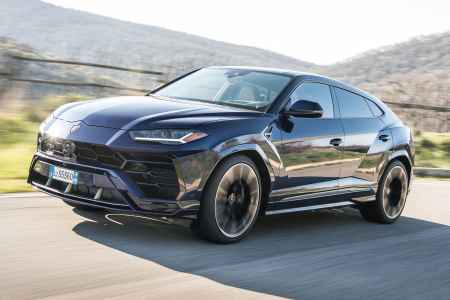 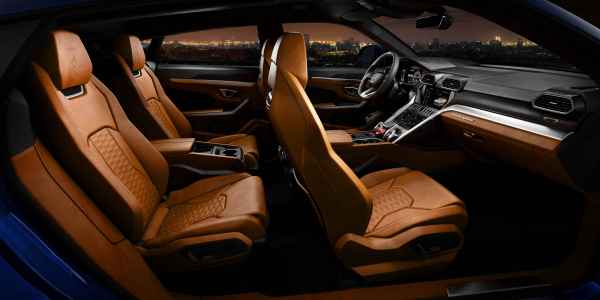 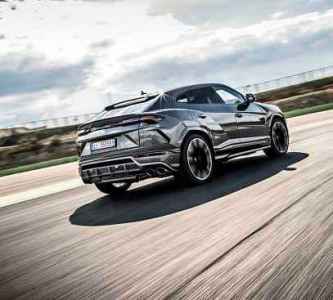 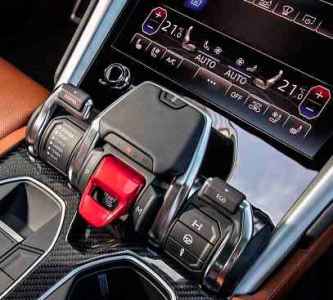 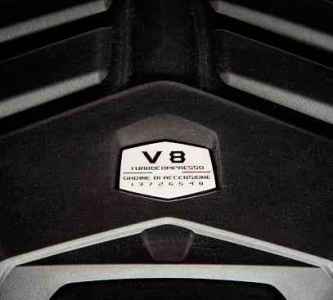 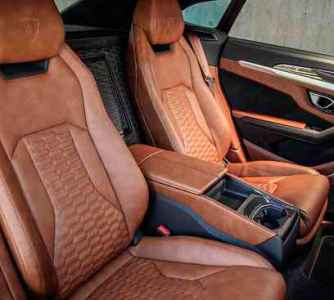 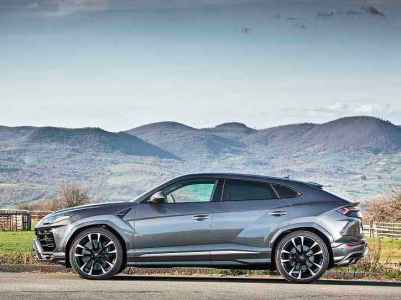 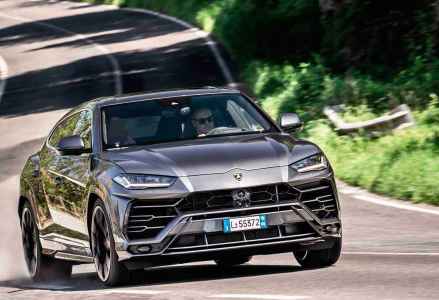 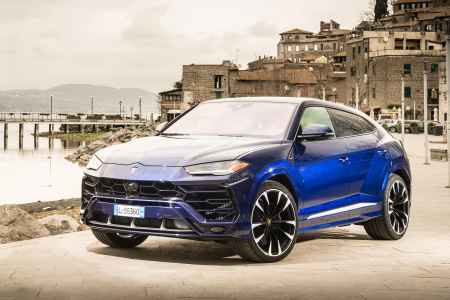 Above left: plenty of room in the rear. Left: Urus manages its 2.2 tons surprisingly well. Below left: optional 23-inch rims don’t help the ride quality. Above left: ‘Tamburo’ offers a myriad of driver settings. Left: Urus feels big on public roads. Below left: interior a step-up in quality and sophistication over other Lamborghinis’.

‘THE URUS IS A MONSTER – A FREAKISH MANIPULATOR OF PHYSICS’

BUT IS IT A LAMBO?

‘We wanted to have the fastest SUV. I think you will be impressed with the car on the track. You will also see the off-road course we have here at the launch. It is gravel. My interpretation is this – speed on gravel, not off-road like a Land Rover!

‘We can choose what we need from within the group – the technologies that enable us to realise the performance we need. The V8 engine was the only engine choice we could make, for example, because you need the torque available at very low rpm. However, while we work within the platform, if anyone [brands within the VW Group] wants something specific, such as we need with the cooling of the engine – oil, water and the gearbox – then we can take responsibility for this.

‘It’s the same with the engine: we have developed at Lamborghini a new intake manifold, cylinder head, camshafts, air filter, new twin-scroll turbos and the exhaust system. It is a Lamborghini engine. The sound is very important with a Lamborghini, but with a turbocharged engine you lose the sound, so we have a resonator in the exhaust to take the harmonics and sound into the cabin.

‘To develop the car we have taken on many more engineers. When I started at Lamborghini [in 1998] we had maybe 40, 50 engineers at the time of the Murciélago, whereas now we have hundreds – and this is to realise the Urus. We have tested the vehicle all over the world. Yes, we have tested it at the Nürburgring, where we have had a big development with the tyres: there are so many types of bumps, surfaces, corners and high-speed sections, it is so much easier there. I said during development that the Urus would set the fastest time, but yes, at the moment there is not so much competition in this class.’