Do not adjust your spectacles. Your eyes do not deceive you. What you’re looking at is indeed a fusion of the legendary 935/78, the 1978-season racer also known as Moby Dick, with modern 911 underpinnings. In fact, it’s essentially the mighty Type-991.2 GT2 RS road car in a period frock and with a few additional competition-racing frills. This isn’t, truly, a racing car. More on that in a moment.

Over 70 years, the back catalogue has been kind to Porsche, with plenty of iconic machines to replicate. When it came to a present for itself, Porsche chose to build a modern day example of the legendary 935/79, AKA Moby Dick.

The new car, known simply as the Porsche 935, was unveiled by Porsche for the recent Rennsport Reunion event at Laguna Seca in California. It makes a spectacular final flourish for Porsche’s 70- year anniversary celebrations while also tying in with the original race car’s 40th birthday. It will be produced by Porsche in a limited run of just 77 units, each one commanding a mere 701,948 euros, plus whatever local taxes apply. In the UK that makes for a grand total of around £750,000 including VAT.

So what, exactly, has gone into this modern day 935? Most of the road-going GT2 RS’s body has been replaced or supplemented by carbon-fibre composite parts. With its streamlined extended rear, the 935 measures 4.87 metres, while the total width comes in at 2.03 metres. For the record, the GT2 RS measures 4.55 metres long and 1.88 metres wide.

Power comes from what is an essentially untouched GT2 RS twin-turbo flat six and thus cranks out 700 metric horsepower at 7000rpm from 3.8-litres of displacement. Porsche isn’t quoting a torque figure for the 935, but that too will likely clock in around the 550lb ft figure of the GT2 RS road car. As per the GT2 RS, again, we’re talking PDK-only in terms of transmission options and power exclusively to the rear wheels. Six-piston aluminium monobloc racing calipers on the front axle in combination with internally ventilated and grooved steel brake discs with a 380-millimetre diameter provide excellent deceleration values at the front axle. The rear axle is fitted with four-piston calipers and 355-millimetre discs.

Just like the road-legal 911 GT2 RS, the 1380-kilogram 935 is equipped with PSM (Porsche Stability Management) including traction control as well as an anti-lock braking system (ABS). Thanks to an on dash map switch, these assistance systems can be adjusted separately or switched off completely, enhancing the 935’s role as a high-end training device for aspiring track pilots.

The aforementioned aero aside, many details of the new 935’s exterior are a salute to winning vehicles from the Porsche motor racing history: The aerodynamically capped rims echo those of the 935/78, while the LED rear lights on the rear wing endplates are adopted from the 919 Hybrid LMP1 race car. The side mirrors hail from the current Le Mans-winning 911 RSR and the exposed titanium tailpipes are modelled on the Porsche 908 from 1968.

These references are carried through to the cockpit. The knob on the gearshift lever has a laminated wood design reminiscent of racers such as the 917, the 909 Bergspyder and the Carrera GT super sports car. The carbon steering wheel and the colour display behind have been taken from the 2019 model year 911 GT3 R. A massive safety cage combined with a racing bucket seat and a six-point safety harness ensure maximum safety. A second seat for the passenger is available as an optional extra. Air conditioning is included as reflects the car’s ultimately noncompetition remit. Yes, this isn’t actually a racing car.

“This spectacular car is a birthday present from Porsche Motorsport to fans all over the world,” says Dr Frank-Steffen Walliser, Vice President Motorsport and GT Cars. “Because the car isn’t homologated, engineers and designers didn’t have to follow the usual rules and thus had freedom in the development.” If that’s the good news, the bad is that said lack of homologation means the 935 doesn’t actually qualify for competition. Nor has it been homologated for public road use either. Put the two together and you have a car, as it stands, that’s really limited to the role of track day toy. But what a stupendous track day toy it will surely be, for the lucky few. 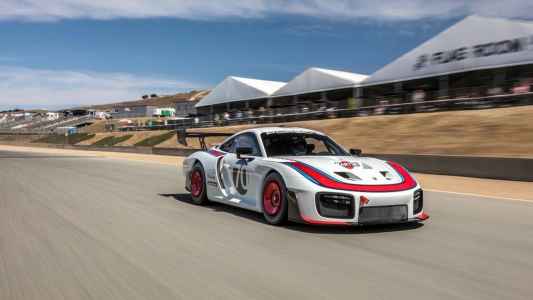 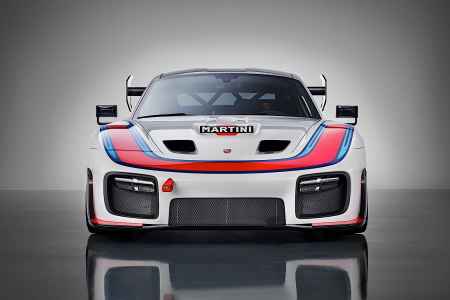 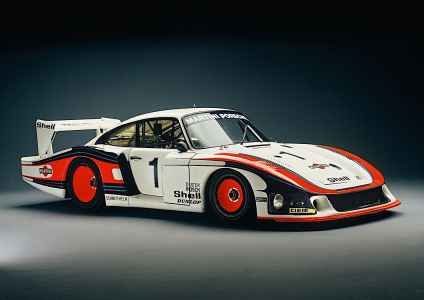 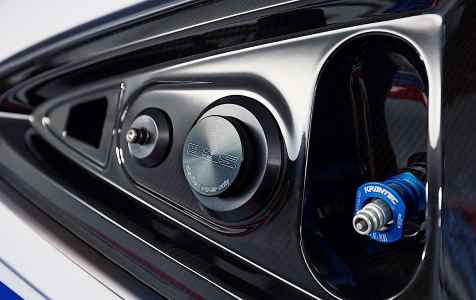 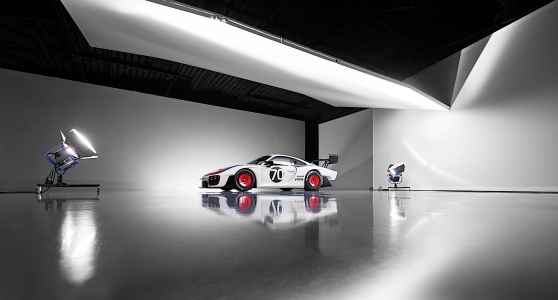 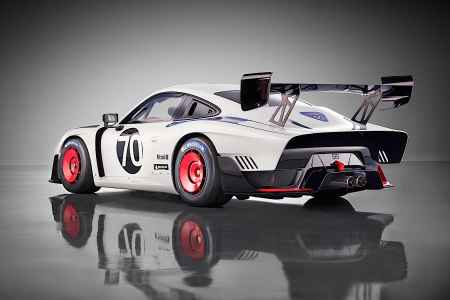 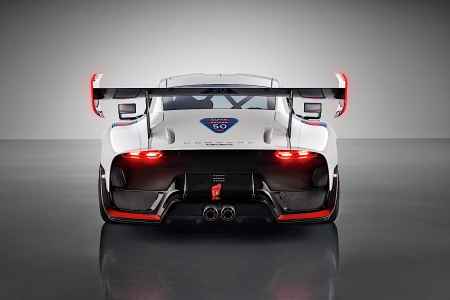 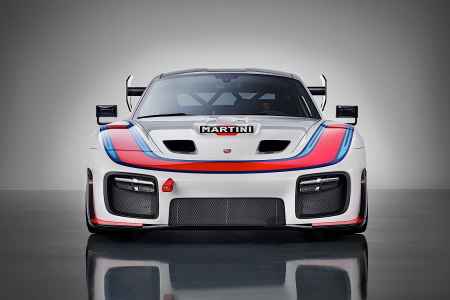 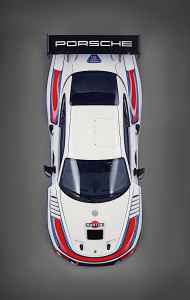 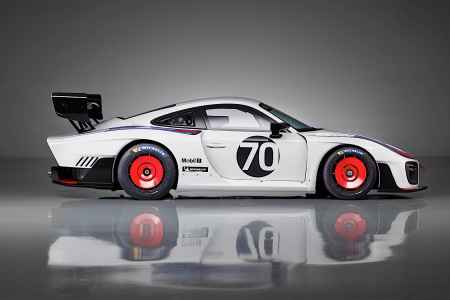 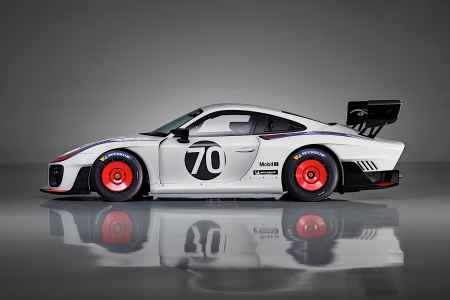 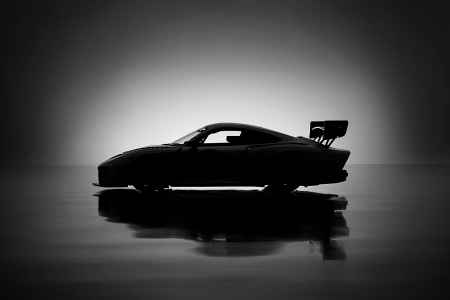 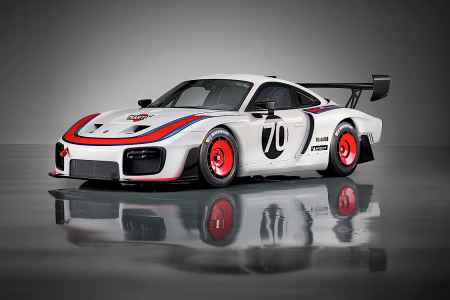 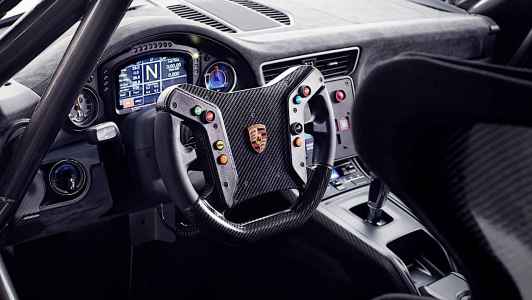 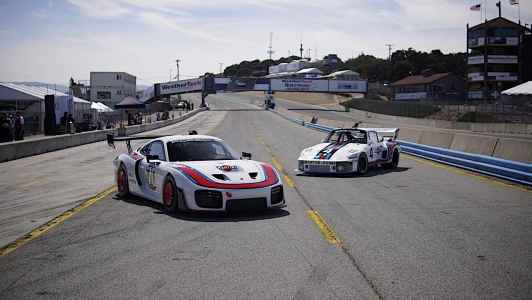 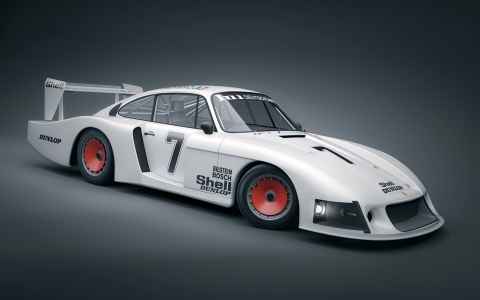 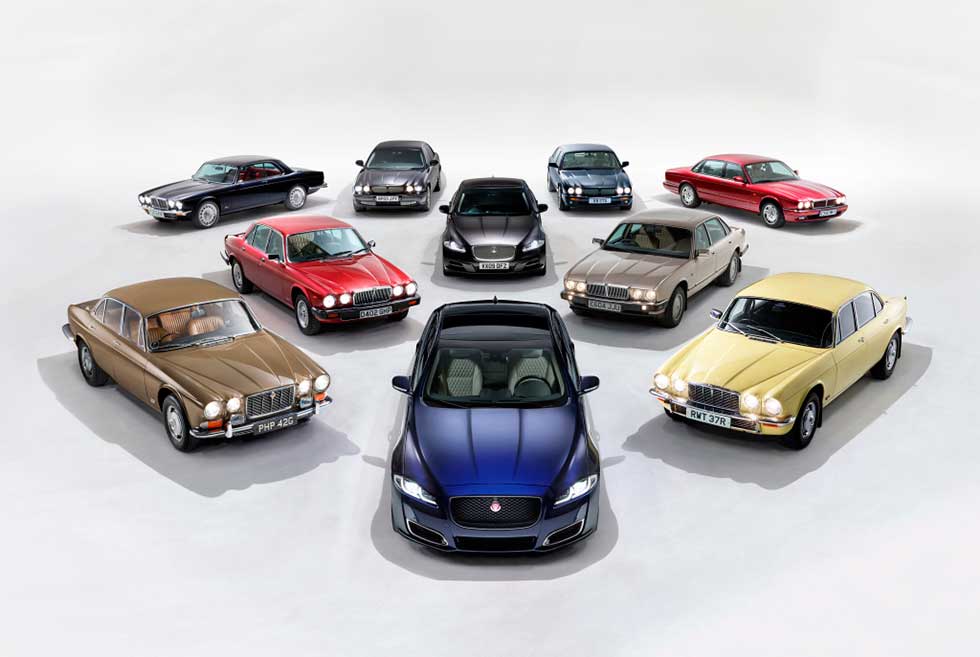